SUTTON Bank inhabits a niche midway between fact and legend in the collective consciousness of travellers. People who have never visited the place have usually heard of it. Like Scotch Corner, Watford Gap, the Devil???s Elbow, Ditchling Beacon and Electric Brae it has been elevated above its station by mythology and notoriety . . .

Sutton Bank is a limestone escarpment that rises from the vales of Mowbray and York, a product of massive geological forces and glacial erosion. Its notoriety arises from the A170, a road that meanders pleasantly from Thirsk, ricochets up the bank in a series of 25 per cent gradients and hairpin bends, then meanders effortlessly off towards Scarborough.

For unwary travellers, it???s a sudden and unexpected jolt to the nervous system. In bad weather it???s a nightmare. In snow it???s impassable. And if you have a car like mine that jumps out of second gear when the revs are high, it???s a pain in the backside and makes your hands sweaty.

At the summit is a North York Moors visitor centre which I cannot comment on because I???ve never been inside. I expect it is similar to other visitor centres. Unsurprisingly, the parking fees are extortionate for those planning a walk that???s going to last several hours. But there are places beyond the yellow line zone where bolshie buggers can park a car ??? albeit at an angle that might drain the oil from the engine ??? that don???t cost a penny. And being a bolshie bugger, I???ve found one.

All those nasty things aside, when the car has been left perched on its hummock, and the brave and undaunted have struggled through the scrubland towards broad western skies, an enchanting and tranquil world of splendid vistas opens up ??? quite literally ??? beneath your feet. (Click pictures for high-res images) 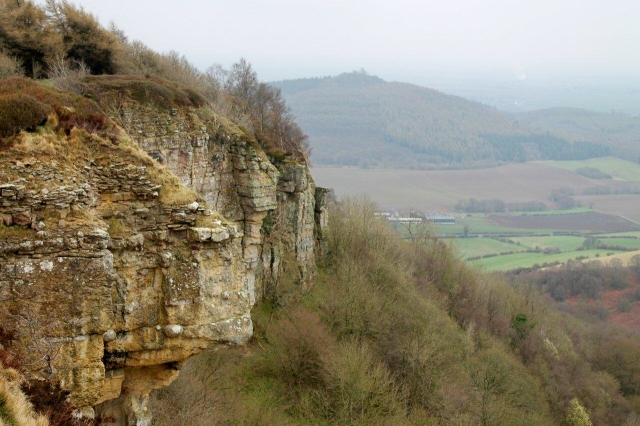 Sutton Bank lies near the starting point of the Cleveland Way long-distance footpath and is one of the early highlights on a route where highlights are abundant. From the visitor centre, the path follows the edge of the escarpment and quite soon downgrades itself from one of those wheelchair-friendly compacted surfaces into something more at ease with the natural environment. Spirits rise as the sound of traffic fades. This is a place to stride out in style with the wind in your hair. 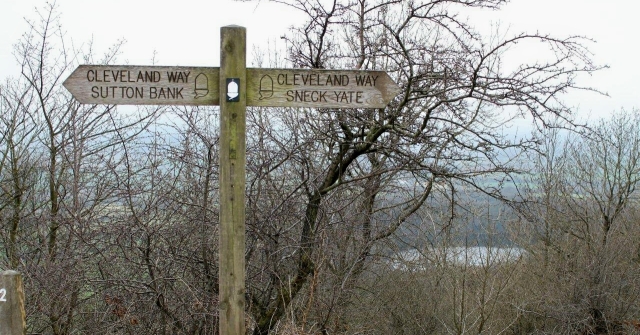 Two chaps building a ramp for wheelchair users at a viewpoint

At the foot of the vertical walls of White Mare Crag lies the dark and brooding Gormire Lake ??? a body of water formed by glacial action and one of the few natural lakes in Yorkshire. According to legend, the lake is bottomless. Apparently, a witch who was fleeing a band of god-fearing and upstanding local folk leapt from the crag into the lake, was caught in an underwater current and emerged from a well more than nine miles away. If that doesn???t impress you, let me tell you about the featherless goose. 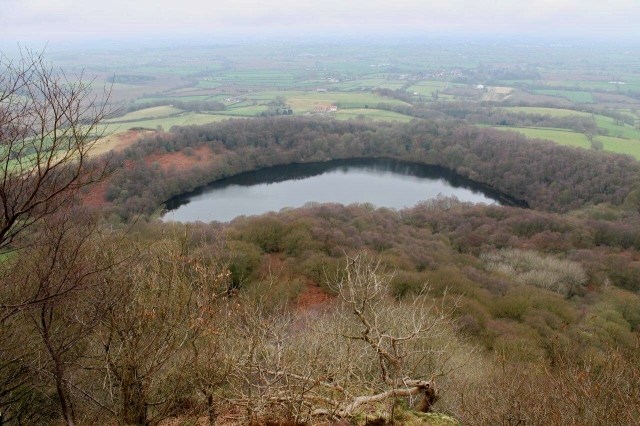 Back in the days when life was simpler and the pace more leisurely, a famer???s goose was paddling on the lake. Like the witch, it was dragged under by merciless currents and emerged 12 miles away in a lake at Kirkbymoorside completely featherless.

How those Yorkshire folk knew it was the same goose is a mystery we shall not investigate too deeply. I prefer to believe its heartbroken owner was visiting a lady friend in Kirkbymoorside to cheer himself up a bit, saw the featherless goose emerge from the lake, made eye contact, recognised the bird immediately, gathered it in his arms and rode back to his farm near Sutton Bank where they both lived happily ever after. But I???m an incurable romantic.

Incidentally, if you enter Gormire Lake on Google and do a search you turn up several websites dedicated to ???wild swimming???. Eh? Wild swimming in a bottomless lake with a reputation like that? No thanks. Might get dragged under and emerge in an expensive spa in Harrogate surrounded by elderly women with blue rinses. Let???s move on sharply. 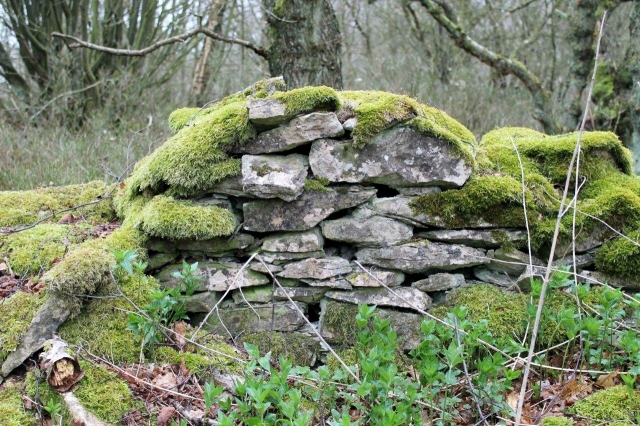 I???m on a tight schedule today because I???ve got an allotment society meeting tonight, and as secretary I???m expected to be there early with my face scrubbed and hair brushed. So I???m following a ten-mile route that will take me along the escarpment to the charmingly-named Sneck Yate Bank, then down a narrow road to Murton Grange, south across fields to the not-so-charmingly-named Cold Kirby, leaving a short step back to the car. 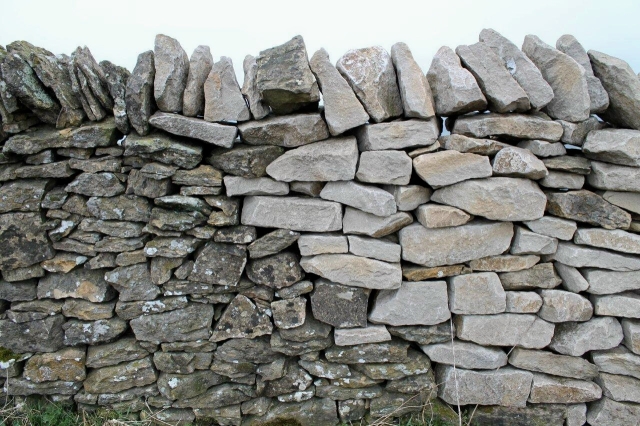 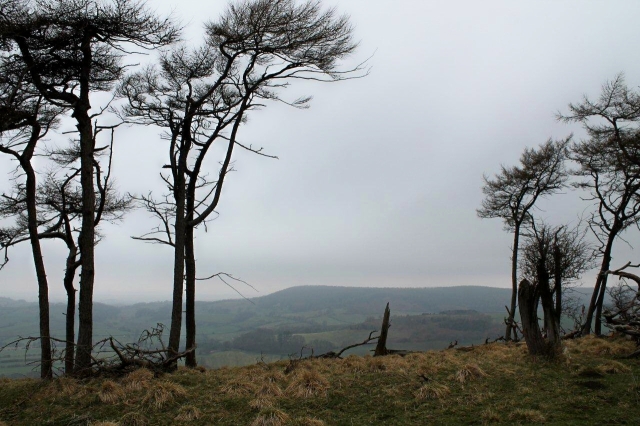 The walk is pretty straightforward and very enjoyable. I see no one all day after leaving the visitor centre except a farmer spreading fertiliser and another pounding the ground with a heavy pinch-bar, making holes for fence posts. Looks like hard work, that.

Near Murton Grange I spy a sign at the side of the road saying ???Danger. Keep away???. Curiosity stirred, I wander into the woods for a closer inspection and nearly fall off the top of Peak Scar. That???s a lesson learned. 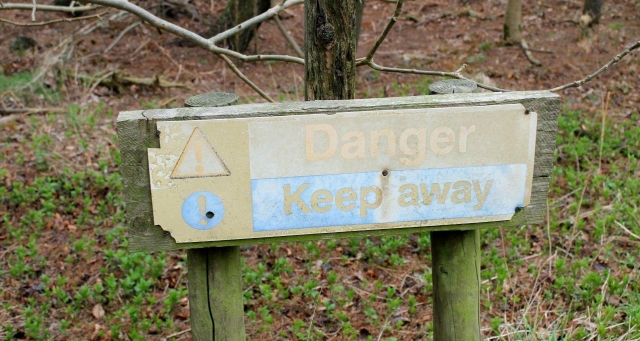 In a wooded defile, sheltered from the cold spring wind, I have a quick kip on a bench but wake up fifteen minutes later when large drops of rain begin to fall. My doctor said it would rain today. Always trust your doctor.

By the time I reach Cold Kirby ??? a name bestowed deservedly, if you ask me ??? the rain is heavy and the wind bitter. Under more pleasant circumstances the village would be worthy of a couple of photographs to enhance this blog post. But because the main street has been dug up by roadworkers for its entire length and is festooned with those red and white plastic crash barriers, I leave the camera in its case. 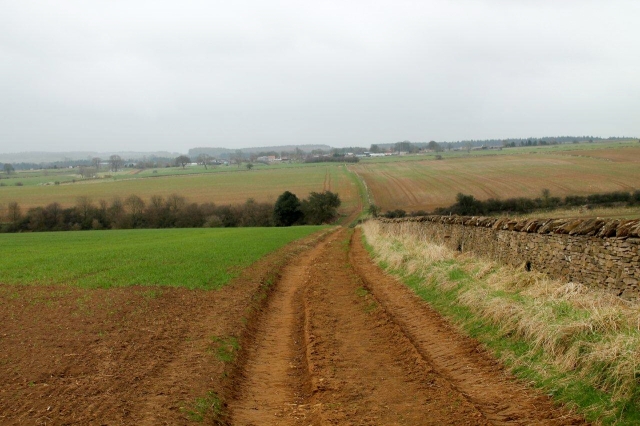 Cold Kirby across the fields, just as the rain begins to fall

This is pleasant walking country. There are no mountains to climb, but fine views across an open land that is soaked in history ??? from the Ice Age to the Bronze Age, to the building of the great monastic houses of Rievaulx and Byland, and their eventual destruction. There is a sense of history in the footpaths, that they link ancient places and have been walked by ancient feet. There is a sense of permanence and tradition. I like that.

Could have had better weather, though. Never mind. The wife’s cooking goose for dinner.