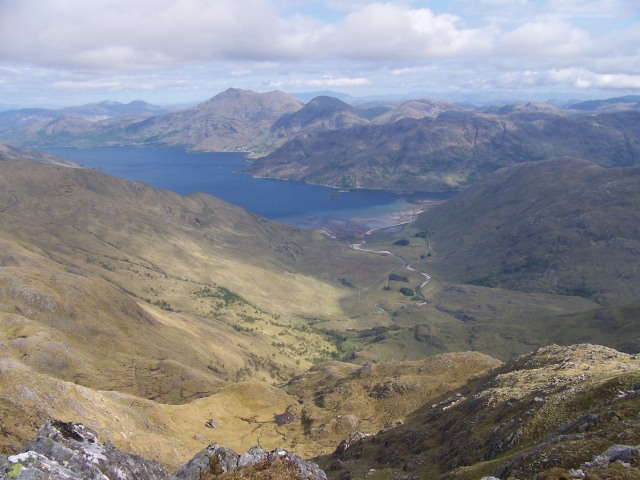 MEALL BUIDHE is a beast of a mountain and it’s going to cause problems. It’s not the highest Munro on the Knoydart peninsula; in fact, at 946 metres it is way down the list at number 222 in the Scottish Highlands. But it’s going to be a pig to get off – without dropping down to Inverie River and a hike of many, many miles back over the Mam Barrisdale pass to the Barrisdale camping ground.

I’m standing on the summit of Luinne Bheinn (below right) (939 metres) with an icy wind roaring in off the Sound of Sleat – so fierce I can hardly stand up. Thousands of feet below, the green glen of Barrisdale rolls to Loch Hourn and the mountains of the north. To the west the ground falls steeply to Inverie 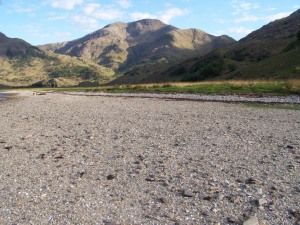 and a silver sea crowded with blue islands. And to the south-east, at the farthest end of a great horseshoe of rippling crags, Meall Buidhe stands in a wall of shadows.

I’ve made a big mistake this morning. I’ve blundered into a hostile environment without an exit strategy. I have no post-summit plan. Traversing the horseshoe ridge from Luinne Bheinn to Meall Buidhe (below left) is not the problem. Getting back to Barrisdale without retracing my path, step by step over the heights of Luinne Bheinn, is the issue.

With a bit of forethought, I could have traversed the mountains and dropped down to Inverie on the southern coast of Knoydart, where there is an excellent pub called The Old Forge, returning to Barrisdale the next day over Ladhar Bheinn, the third and highest of the peninsula’s Munros. But that would have required an element of planning.

Out of the wind, as if blown like a beech leaf on a dry autumn day, dances a man in a red coat. I ask him the best way to descend Meall Buidhe, because my guidebook route takes me along the west ridge to Inverie and many miles out of my way. I am considering trying the north ridge – down Creag Dhearg –  which looks impossibly steep and unappealing, with terraces of slimy crags that seldom see the sun.

The Man in the Red Coat tugs his white beard and wrinkles his brow. He reckons the best option is to descend from Bealach Ile Coire in the middle of the horseshoe ridge to two lochans in the corrie below us – Choire Odhair – then climb a grassy “ramp” to the western flank of Luinne Bheinn and the path to Mam Barrisdale. He thinks he has read about this route in some obscure guidebook or other. He can’t remember which.

Fortified, I march on towards Meall Buidhe, which is four miles away along the horseshoe ridge.

Just below the summit I meet a man with a dog, who I recognise from the camping ground. We discuss ways off Meall Buidhe for those returning to Barrisdale. It’s not just me who harbours concerns in this direction. He reckons the best way is to descend to the lochans in Choire Odhair “and up the grassy ramp”. It’s the most straightforward and reliable route by far, he adds reassuringly.

He’s done it before then, I enquire?

No. A man in a red coat has just given him directions.

On the summit of Meall Buidhe my spirits swell like a sail in the wind and I rise into the blueness. The Inner Hebrides lie before me – Rhum, Eigg and Skye, fragments of Caledonia that have been broken from the mainland and abandoned in the ocean. Majestic mountains and hills, all blue and grey and blue again. The Hebrides have that alluring and romantic appeal that all islands possess. And beyond them, the Outer Isles. Fragment after fragment, island beyond island.

The west ridge to Inverie looks pleasant – though too much distance is involved. The north ridge to Creag Dhearg is devoid of a path. That says it all. I opt for the lochan route and the mysteries of Choire Odhair.

On my return along the horseshoe ridge I meet three Scottish blokes. They, too, are camping in Barrisdale. And like me a 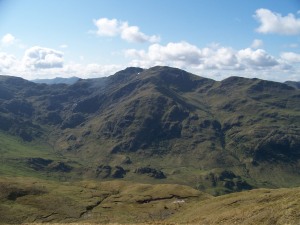 nd the Dog Man, they have concerns about descent routs off Meall Buidhe (right, from Ladhar Bheinn). I divulge the information entrusted to me by the Man in the Red Coat.

They fall about laughing, the three of them, as if I’ve just cracked a joke. I am the third person, it transpires, who has told them about the Man in the Red Coat and the fabled lochan route. No one, it appears, has actually had any experience of descending into Choire Odhair. The lochan route, they say, is becoming an urban myth.

This is fascinating. I am intrigued by urban myths because they invariably involve remote places. My favourite urban myth concerns the newlyweds from Barrow-in-Furness who went to the Isle of Man for their honeymoon. On the first night, the groom bumped into a load of workmates who were on a daytrip, got absolutely blind drunk and woke up the next morning on a steamer in Barrow docks.

This story was always recounted as unquestionable fact when I was a child. Someone knew someone who knew someone who knew the groom. But I’ve heard exactly the same tale involving a couple from Ferryhill on honeymoon at Whitley Bay and a bus-load of miners. No doubt other versions exist. Urban myths, eh? Where would we be without them?

I take a gamble and follow the mythical path, dropping down from the horseshoe ridge through a series of small, slippery crags and grassy ledges. There is no clear route, and more than once I am forced to backtrack to avoid sheer drops.

Just when there appears to be a grass slope down to the lochans, another tier of crags appears beneath my boots to cut off the line of descent. But with a bit of careful footwork – and handwork – I alight in a pleasant hanging valley, pass the fabled lochans of Choire Odhair, and climb up the grassy “ramp” to regain the original path back to Mam Barrisdale.

Glancing back, the afternoon sun has brought out the roughness of Creag Dhearg – Meall Buidhe’s north ridge. What I thought were steep mossy slopes are in fact immense slabs of wet rock. A descent down this side of the mountain would have been treacherous.

Two hours later I’m basking in sunshine outside my tent. The Dog Man is in his little brown tent behind me and the three Scottish lads in their tents to the side. We have exchanged experiences of the lochan route and decided it was as good a way down as any.

What has become of the Man in the Red Coat we know not. Perhaps he’ll wake up on a steamer in Barrow-in-Furness.

I GO for an evening stroll to the western point of Barrisdale Bay and photograph Beinn Sgritheall (peak peek) across the loch. The ben is blue and beautiful in the cool afternoon sunlight. I photograph little pink flowers (no idea what type they are) growing in clumps in

rock slabs that jut into the bay, and a broken deer’s antler lying in the shallows.

In the turf above the shore I find an old lark’s nest, long abandoned, with one cold, dead egg that failed to hatch. That’s sad. Gwenddolau died in a lark’s nest. There are deer in the grasslands and birds in the sky. And on the wind I catch the

faint though constant drumming of a diesel generator – a reminder that here in this wilderness, people can live and blend into their surroundings. They are part of the surroundings.

Knoydart. This really is a magical place.