The Haunted Man and the Field of Jewels

THE Haunted Man dreams he is running into the sunset, his golden shoes dancing on waves and salt spray glistening on his face. His dream takes him into the west and the sun’s embers, where oceans spill over the edge of the world and fall into gloom. For beyond the edge lies a summer land where Arthur sleeps and warriors with fire glinting on their spears drink golden mead and sing of Catraeth and Gododdin. But when the Haunted Man wakes it’s February and Yorkshire.

The Haunted Man pulls on his golden shoes and the pointed woollen hat his grandmother knitted him, and he runs and runs in search of the dream. His feet pound along moorland lanes that never end, up spiral paths that climb to heathery peaks, through banks of weary snow and eternal Pennine mud.

He hears a curlew cry on the wind and his heart sails like the curlew. He calls the curlew’s call, asks it where he can find the sunset, but the curlew does not answer.

He hears a raven on the wind and his heart beats like the raven’s wings. But the raven glides into the clouds and is lost from view. And the clouds bring sleet and then snow on a blast of wind from the east, shrouding the wintry sun from the things of the earth.

Then in a hollow between two moors, where a cold river rattles through dank woods and slopes of gorse, the Haunted Man finds an empty house with 1741 carved in a sandstone lintel above the door. The windows are dirty and cobwebbed, the rooms empty, the stairway climbing to loneliness. Only spiders live here. Only wind sighs. 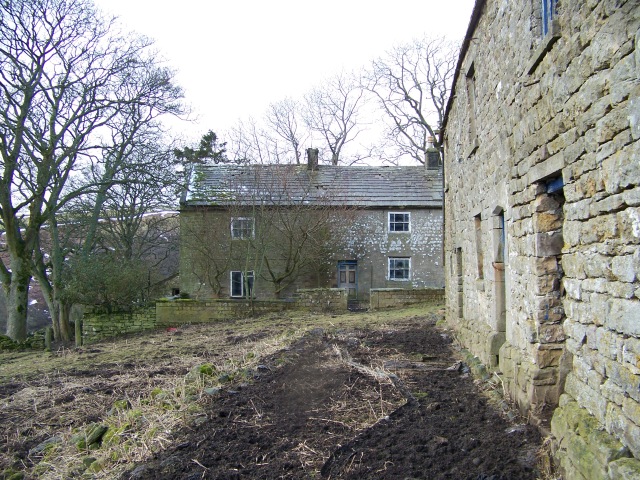 In a window he sees a face staring back. And the face whispers: “Haunted Man, you seek the sunset – but the time has not come. You seek the golden mead but the mead is for heroes. You yearn to burn in the sun’s embers like the brief and tragic flicker of a shooting star in the night sky – but for now your land is cold and the earth barren.

“Let your golden shoes take you south across sodden fields to a jewelled meadow. And there lay you down to drink the scents of spring.”

And the sun comes out from behind a snow cloud. And the man is running through the jewelled meadow. And he lies down and drinks in the scents of spring and his soul soars. But on the other side of the wall it’s still February and Yorkshire.

And his golden shoes will bear him into the west and the sun’s embers. Then he will run for ever.

4 Responses to The Haunted Man and the Field of Jewels