THERE’S snow on the fells, a wintry nip in the air, and a green slate sign that says Permissive Path. I’ve never come across one of these before. Not in the Lakes. It’s a polite way of saying: “Yes, I know a public footpath runs through my farmyard, and you have as much right to walk it as I have. But I’d rather you trotted round my farm than through it, so I’m asking you politely to respect my privacy. Oh, and don’t pinch anything.”

I’d parked the car beneath hawthorns on a muddy corner between Melbecks and Tenter Hill, and after a brew on the petrol stove headed across fields to the foot of Ling How and The Edge. It’s here I encounter the permissive path.

I lose the path almost immediately and blunder blindly across fields and over a stone wall. Well, I ask you. If farmers want to muck about with the footpaths, they can’t complain when people go astray.

I’m following the route I took last time I climbed Skiddaw – along Ullock Pike to Carlside, then up the south-west flank to the top. This is, by far, the best route to the summit. It’s a fine ridge walk with extensive views over the Solway Firth and Derwentwater – and hardly anyone uses it. 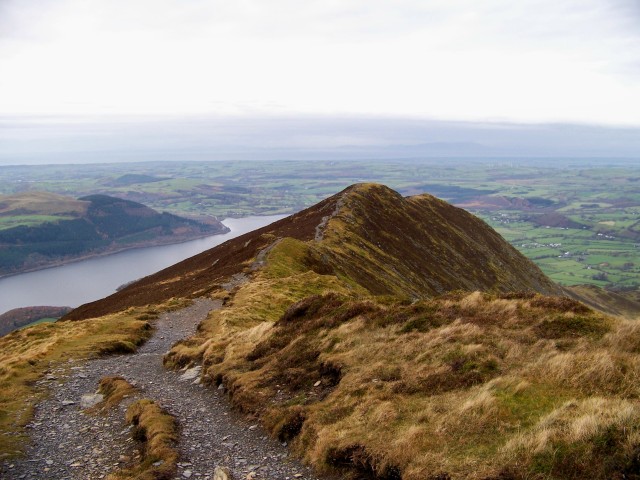 My God, though, it’s cold on top. There’s a couple of inches of snow, a freezing wind, and mist streaking across the rocky bones of the summit. But, periodically, the mist half-breaks to reveal tantalising glimpses of the Solway and the Caldbeck Fells. It’s one of those mists that you know is only a few feet thick. If the wind would blow it away, a perfect day would flood in like a fast and warming tide. I can see the glare of the sun above me, and it imbues the mist with an atmospheric aura.

I drop down Skiddaw’s south-east flank and head towards Lonscale Fell, sailing through the mist on automatic pilot along a fence I’m sure leads to where I want to go. But I can’t be bothered to check on the map. I’m dwelling on permissive paths.

Here’s something to think about. If a public right of way runs through a farmyard and the farmer wants a bit of privacy so constructs a permissive path around his farm – like has happened at the foot of Ullock Pike – are we morally obliged to respect his privacy and use his path, or should we exercise our legal entitlement and adhere to the right of way – if nothing else, just to preserve that right with usage?

This is gnawing at my brain because this morning I took the permissive path option without giving the question much thought, mostly because I’m a decent bloke who doesn’t want to disturb a farmer while he’s eating his second breakfast.

But no one gives a monkey’s toss about walking past my front door. I don’t have the option of creating a permissive footpath around my humble mid-terrace estate. Like millions of people in this country, I have a road outside my house, and people are legally entitled to stand at my front window and watch the telly if they’re sufficiently hard-faced. They are entitled to park their cars under my window sill and do a bloody oil change if the fancy takes them.

So is privacy dependent on wealth and the ownership of land? Do we respect a farmer’s privacy and use his permissive path – and not bat an eyelid later in the day when we trudge past a hundred front windows to reach our own front door? Or the next time we come across a tidy little farm in the middle of the countryside, with its permissive path signs carved in the local green slate, do we say: “Sorry pal, but the little red dashes on my OS map run across your front step and between your milk bottles, and if the sound of my boots disturbs you then you’ve got a problem that should be addressed before the dark nights close in”?

Helvellyn viewed from Lonscale Fell through a break in the mist

In a state of mild surprise at not having gone astray on autopilot, I arrive at the cairn on Lonscale Fell. Breaks in the mist allow brief glimpses into the gorge that divides Skiddaw from Blencathra, its sister fell, and south to the Helvellyn range. Then I backtrack a few hundred yards and follow a collapsed stone wall down the intriguingly named Burnt Horse to the valley and Skiddaw House.

Skiddaw House has entered another phase of its life cycle. The first time I sat and ate my sandwiches on the grassy sward beneath its homely windows was in the late 1970s. I was with my father and we’d just dropped down off Skiddaw via the west ridge. Somewhere there’s a picture of me sitting on a wooden bench and wearing a green checked shirt that cost three quid at Asda. Good shirt that. My father was wearing a kilt and tam o’ shanter (no he wasn’t – I made that up). Skiddaw House was, in those days, if I remember correctly, a Youth Hostel.

The next time was in 1998 when, in a dramatic switch of generations, I called in with my son, Fergus, while walking the Cumbria Way. Its YHA days were over – temporarily as it transpired – and it was being managed by an organisation of friends who were, as luck would have it, in the happy throes of holding an open day. We put our feet up for an hour and had tea and cakes. It was really cosy. We didn’t want to leave.

Today it’s a bleak place, all locked up and standing in silence, though the YHA triangle has returned and it’s doing business again. But on the gate there’s a sign that says “no public right of way”. Not even a permissive path.

Hmmm. I plod the three miles back to the car and, as evening falls, sip a billy of hot tea and warm some home-made Czech cabbage soup on the petrol stove, thanking the landed for allowing me to park on this patch of mud at the side of the road. I shall be forever in their debt.

And as I sit in the shadows stirring my soup, Skiddaw subsides into the night and lights flicker on at the surrounding farms. All is well in the permissive society.