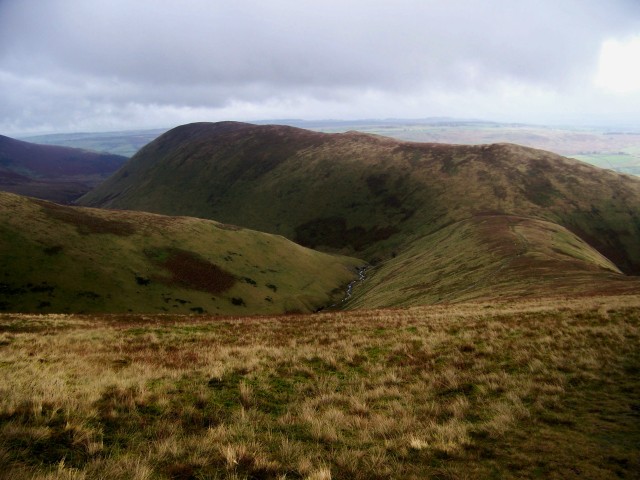 For two solitary minutes on one of the wettest days since biblical times, the clouds roll back and the rain ceases, revealing the modest splendour of Souther Fell (Thirty seconds after this picture was taken the clouds surged back and the fell – like the ghost army that is said to march along it – was swept away never to be seen again)

RAIN drags itself across the felltops in great drenching curtains – hammering down on the grey roofs of Mungrisdale, filling gutters, swilling mud from verges and turning the River Glenderamackin into a milky brown torrent. It’s days like these you should sit in your car behind a layer of condensation, listening to the Shipping Forecast bringing solace – or dread – to poor souls out in Fastnet, Irish Sea, Malin and Rockall.

Ghosts venture out in any weather because the rain falls straight through them. And – approaching the subject logically and scientifically – a headless horseman can’t see if it’s raining anyway. The weather is immaterial. So I’m off ghost hunting. This is something I’ve been planning for a couple of days. And besides, it does a man good to get soaked to the skin and frozen to the core every once in a while.

Souther Fell is the eastern extension of Blencathra, one of the Lake District’s finest mountains. In 1735, two farmworkers reportedly saw an entire army marching five abreast along the fell. This spectacle was supposed to have lasted an hour. Three years later, 30 people witnessed the same phenomenon – and this time it lasted two hours. Then, in 1745, hundreds of people witnessed exactly the same spectacle. All the sightings occurred on Midsummer Day.

So, what will I see today? Judging by the rain lashing the car as I sit in a lifeless Mungrisdale – where curtains twitch but nothing else moves – very little at all. There is, also, what could be construed as a second major flaw in this ghost-hunting plan. It’s not Midsummer Day. It’s the middle of winter. But that’s not going to deter me. After diligent research I’ve reached the conclusion that the Midsummer Day factor is purely coincidental. Ghosts don’t have calendars. Half of them don’t even know what day of the week it is.

I head off along the track to Bannerdale. Once clear of the village I ford the River Glenderamackin (no easy task), then head straight up Souther Fell. It is only 1,680ft high, but quite how an army is supposed to march up here, and walking five abreast when the gradient is extremely steep in places, is beyond me.

On a clear day the views east to the Pennines are pleasantly rewarding. Today I can see about 50 yards, with rain blasting in and thick mist wreathing the summit. If an army is marching up here – English, Jacobite, Roman or otherwise – no living being would see it pass by.

I sit on a rock near the summit cairn and get well and truly buffeted by the weather. No ghosts appear so I rummage through my sack and find an energy bar. I eat the bar. Still no ghosts. Then I eat some dates because I read somewhere once that dates are good for you. The rain has penetrated my old Berghaus jacket and I’m beginning to shiver. Still no ghosts, so I utter an inaudible “bugger it” and slope off in the mist towards Scales Fell and Blencathra. 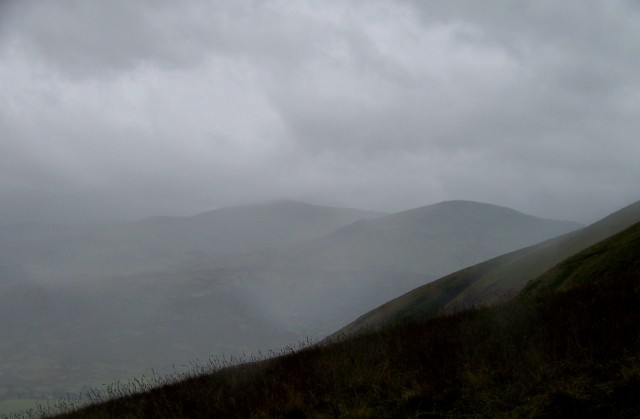 On the top of Blencathra the wind is blowing an absolute hooley. Visibility is extremely poor and rain is rattling in from the south – apparently from Wight and Portland, veering west-south-west, imminent, force nine. There is no shelter whatsoever, so I continue along the crest of Tarn Crags and momentarily consider descending Sharp Edge. 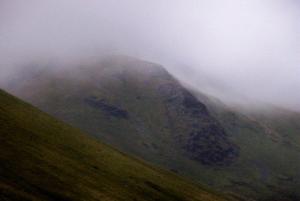 The foot of Sharp Edge. The sharp bit is up in the mist

Sharp Edge? I don’t think so. Sharp Edge is like Striding Edge on Helvellyn only shorter and, errr, sharper. I once tried to climb it in snow, many years ago. I had my parents’ dog with me and it bottled out. We actually got onto the Edge itself, me with my ice axe and the dog with its tail between its legs. The dog refused to climb further. It just sat there passively, staring at me with big sad eyes and its whiskers frozen up. So we turned around and slid in the snow all the way down to Scales Tarn, which cheered the dog up no end. I finally climbed Sharp Edge about six years ago. Without a dog.

And now here I am at the top of the Edge, peering down shiny wet rocks into a grey abyss with wind howling mournfully. The wind is actually getting stronger.

Wham. A particularly vicious gust blasts across the mountain and forces me to the ground. It is followed almost immediately and without warning by a second blast. Wham. Wind like this is scary. It hurtles from nowhere like a train from a tunnel. Wham.

My liquid plan trickles in a new direction. The wind is becoming decidedly dangerous. The top of Sharp Edge is a bad place for a bloke to get blown off his feet. Twice in the past I’ve been lifted into the air by sudden gusts. If it happens here I’ll be over the crag and joining the soldiers. One of those rows will be six abreast.

Bent double, I retrace my steps over Scales Fell. This is a bit of a cop-out, I suppose, but the advantage is I get to remain in one piece. Down in the valley the Glenderamackin is white and swollen. The paths are sodden. As I pass beneath Souther Fell my heart goes out to the poor fellows marching over its summit.

Back at Mungrisdale I boil a can of tea beneath the shelter of the hatchback and heat some home-made spinach soup while the rain falls incessantly. A farmer speeds past on a quadbike with a dog perched on the back. About 30 Swaledale sheep stream behind him with a second dog scurrying round their heels. The second dog sticks its nose in my soup billy. Like me, it is drenched to the skin. It doesn’t touch the spinach soup, just sniffs. I guess it’s more of a potage bonne-femme dog.

As darkness falls I lift my eyes towards the fell, searching for soldiers. There’s nothing up there but mist, foul weather and encroaching night. Nothing alive and nothing dead. No lost armies, no Roman eagles, no scarlet coats heavy with rain, no dripping Jacobite plaid. 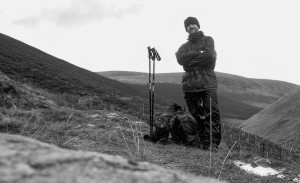 4 Responses to Souther Fell, Blencathra – and the Ghost Army