I’VE forgotten the soup. Dust settles on the gravelly car park at the head of Haweswater. Boots and sweaty socks lie scattered haphazardly on grass as evening shadows lengthen. A petrol stove hisses and flares while a Ministry of Defence billy can reflects the sun emptily. Sixty-five miles to the east, a large pan of homemade chicken and vegetable broth sits untouched on a cold cooker. I’ve forgotten the soup . . .

This is the end of the day and the end of the story. It sort of sums things up. But for the sake of clarity, and because I’ve got nothing else to do while I sit here with my empty billy, I’ll go back to the beginning.

It’s one of those mornings you dream about: burning sun high in the sky; mountains standing proudly as if posing for a tea towel; lake shimmering; a May wind gliding fresh along the valley. Before me lies a stiff climb to Blea Water and the top of High Street, an open ridge to Thornthwaite Crag, Froswick, Ill Bell and Yoke – then a gentle saunter along the Kentmere valley, a final ascent over Nan Bield with the sun on my neck, and a chance to reflect on the banks of Haweswater while I rest bare feet in cool grass and warm some soup.

So off I go, up the side of Rough Crag to Blea Water, where many years ago I spent a night under canvas – though I can’t for the life of me remember why, or where I was going or from whence I had come.

Eric Pickles is a bastard. Sorry, I’m going off at a tangent. Eric Pickles is a bastard for many reasons and I’ll list some here. Firstly, he’s always described as a gruff or down-to-earth Yorkshireman, and that in anybody’s book puts him in the category immediately (thankfully, not all Yorkshiremen are gruff or down-to-earth). Secondly, if you want to impose austerity measures on an unconvinced public you employ a thin man with leather patches on his elbows – not someone who looks like they eat three cow pies every night. Thirdly, he once visited The Northern Echo offices in Darlington and the editor told me that he’s a right obnoxious bastard – and I don’t mind telling you this now that I’m in the firing line for redundancy. Fourthly, in his quest to slim down local government he has threatened to scrap legislation protecting the nation’s allotments – and let’s face it, he doesn’t look like the sort of bloke who’s short of a plate of roasted Maris Pipers, boiled turnip and mushy peas.

I have a habit of getting a bee in my bonnet while I’m out walking. I don’t know whether other people have this problem. Probably not, because most folk walk with companions or in groups, and therefore indulge in that human activity called conversation. I walk alone because I haven’t got any friends. It would be nice to say I drift along high mountain ridges like a lonesome Clint Eastwood, regarding strangers with a wary eye before melting into a dusty sunset – but I’m more Timothy Spall with boots and an attitude problem. If by chance you recognise yourself here, too, then you’ll know that when there’s nobody to argue with you argue with yourself.

So last night, while I was getting my gear ready, I received an email from Peter Horrocks, the North-East representative for the National Society of Allotment and Leisure Gardeners, drawing my attention to the threat posed by Eric Pickles. I am, you see, the secretary of my village allotment association and therefore have a vested interest in opposing this treacherous Tory treachery. Eric Pickles is – as I stumble up Riggindale Crag towards the summit of High Street – a very large and very noisy bee in my bonnet. He is threatening to spoil my day on the fells and I can’t get rid of the sod.

By the time I reach the ruined stone wall that runs along the summit ridge, I have already laid plans for a mass protest of allotment holders in London along the lines of the student riots late last year. I have visions of myself hoisting an allotment socie

ty banner on the parapet of Millbank Tower in imitation of that famous picture of Russian soldiers unfurling the red flag on the roof of the Reichstag. I am in full flight. There is not a four-letter word in the unabridged version of the Oxford English Dictionary that I have not spat in the direction of Downing Street. I even dig deep into my rather shaky memory and dust off the immortal words of Nye Bevan (which I have recently seen printed on a T-shirt) and cast them to the wind:

No amount of cajolery, and no attempts at ethical or social seduction, can eradicate from my heart a deep burning hatred for the Tory Party. So far as I am concerned they are lower than vermin. 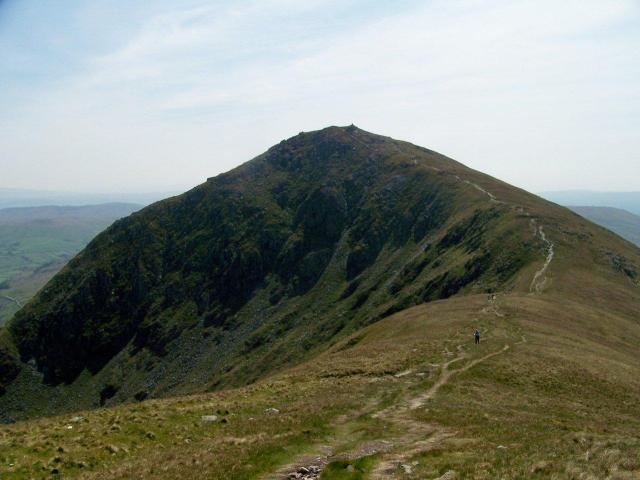 Ill Bell, above the Kentmere valley

I steam off towards Thornthwaite Crag in brilliant sunshine and an icy wind. Then after crossing the summits of Froswick and Ill Bell I spot an abandoned slate quarry I haven’t seen before, a couple of hundred feet below me. I nearly kill myself twice trying to climb down to it, first on the crumbly slopes of Star Crag and then on Rainsbarrow Crag, before deciding I am more valuable alive to the allotment movement than I am dead. The same goes for cabbages. So I regain the ridge and search for the sissy’s way off the mountain.

On the summit of Ill Bell, looking towards Windermere

On Yoke I abandon the sissy’s route and strike down through rough pasture and intak fields to the track that runs along the Kentmere valley. This involves clambering over several dry-stone walls and scattering some sheep. But what the hell. Did Captain Stepan Andreevich Neustroev worry about a few sheep when he was storming the Reichstag?

The last time I ventured along the track in the valley bottom was in 1984, when my wife and I were being bumped around in the back of a short-wheelbase Land-Rover driven by the ginger-headed son of the man who owned the Lakeside and Haverthwaite Railway. My wife was seven months pregnant at the time, and I always attribute this incident to my only child being a head-banger. If I could be bothered to search the internet I’d probably stumble upon a scientific study to add credence to this theory. 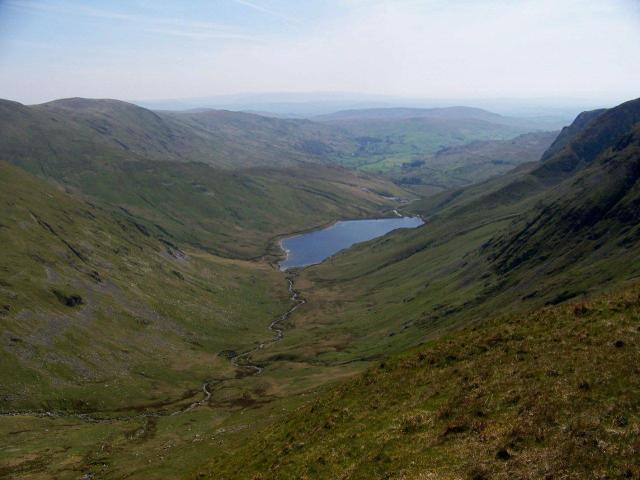 Looking down the Kentmere valley

And next comes the best part of the day. Eric Pickles, that big stripy bee, escapes my bonnet as I clamber in brilliant sunshine up a breezy fellside – where wild ponies graze on scented grass – to Smallthwaite Knott and a meandering track that takes me over Nan Bield pass to the delights of Mardale. I sit for a while on the banks of Small Water – the most pleasant of mountain tarns – and watch trout flop lazily on its silver surface, before continuing down a dusty track to the head of Haweswater.

And once back at the car park, I sit on the grass, pull off boots and socks as all travellers should, kindle up the petrol stove and unpack the billy. And at this point I discover . . .

FOOTNOTE: There’s an email from Peter Horrocks waiting for me when I get home which includes a link to Pickledom – the Department for Communities and Local Government website. Responding to media claims that allotments are going to be sold to greedy developers or turned into golf courses, a spokesman says, without pausing for punctuation: “This is simply untrue we will not remove statutory protections for allotments or any frontline services.” Hitler said something similar about Poland.