Martindale Fells and the Three-Legged Pig of Prague

Beda Head from the quarry above Martindale

YOU think you know your parents. You presume that, after a lifetime of familiarity and togetherness, their lives, their characters and their pasts are so utterly immovable and unchangeable that they might as well be cast in stone. Then one Saturday night, while you’re knocking back a bottle of wine and a couple of beers, your father reveals a secret he has harboured for 62 years . . .

On the other end of a telephone line 98 miles away, he tells you that the first pig’s trotter he ever ate was cooked in a tea can by an Irish navvy on a building site in Sanquhar in 1948. I cannot begin to tell you how much I am impressed by this revelation.

That was Saturday night. Today I’m climbing up an old quarry path above Martindale, near Ullswater, along the side of Brownthwaite Crag, when I stumble upon something which is linked in the most tenuous of fashions to my father’s tale. Incidentally, he was prompted to reveal his building site story because I’d just told him I’d cooked myself a pig’s trotter casserole for dinner – the four neat little feet courtesy of Bolam’s meat emporium in Sedgefield. The casserole, in turn, evolved from a succulent camping dish invented by my wife called the Pig of Prague and a song by Irish folk singer Christie Moore. Is this getting complicated because I think I’m losing my own plot?

Martindale has a timeless atmosphere about it. It’s one of the few Lakeland valleys that is completely off the beaten track. Like Wet Sleddale, and perhaps Borrowdale after the crowds have departed, it is Lakeland at its best.

So I’m climbing up this path in the direction of Gowk Hill and the High Street ridge when I chance upon the tiniest of slate quarries. And the first thing I see in this tiny slate quarry is a shot-hole some gnarled old quarry fellah wearing a flat cap at an impossible angle has bored by hand with a hammer and jumper. But it’s not any old shot-hole in any old rock – this is what a quarryman would call a cross-hole, because it’s been bored across the bate (the grain, or the cleavage plane) of the slate.

I’ve been waiting for a long time for an opportunity to write an article on slate quarrying techniques – but now that one has arisen I suddenly discover that my father’s revelation and the dank and familiar atmosphere of the abandoned slate quarry have transported me back to 1985 and an incident involving a bag of beetroot. Please bear with me. I’m coming back to the Irish navvy, the Pig of Prague, Christie Moore and the Martindale fells – the slate quarrying techniques can wait until another time. There are any number of loose ends flying around here like startled pigs. But I have them under control.

Take a deep breath and let it out slowly. We’re back in 1985 and Margaret Thatcher is Prime Minister. I said let it out slowly, not in sharp panicky gasps. It’s 1985 and I’m working as a level-driver – a tunneller – for a company called Burlington Slate in England’s biggest and deepest slate quarry, at Kirkby-in-Furness. There are four blokes working on the deepest floor of the quarry: David Coward, my level-driving partner and mentor, myself, and two chaps working a complicated apparatus called a wire saw – one’s an argumentative old codger called Cartmel and the other a friendly little chap known as Josser. On the van to work this morning, someone gave Josser a bag of raw beetroot.

I ask Josser what he intends to do with his beetroot. He says eat it for his lunch. Now I know, and so do you, that beetroot requires at least an hour-and-a-half’s boiling before it’s fit for consumption. So I ask him how he intends to cook it. And he says: “Watch this.”

During the course of the morning, while the cantankerous Cartmel keeps an eye on the wire saw and me and David get on with our work, Josser burns the dregs out of a used five-gallon Castrol grease bucket and swills it out in a puddle. He then fills the bucket with fresh water and beetroot. Meanwhile, he has arranged for a load of old wooden pallets to be brought into the quarry in the shovel of a Fiat Allis digger. He sets light to the pallets once he has piled them around his grease bucket. Two hours later, on the stroke of bait time, his beetroot are perfectly cooked.

“Dust’a want a la’al bit beetroot?” he asks as we wander off to the cabin.

We decline his offer and he laughs his head off.

And the parallel here, you will have grasped, with my father’s revelation is the ability of the working man to push culinary boundaries beyond the accepted norm. If you’d been handed a bag or beetroot or a pig’s trotter at work or on a campsite and been asked to cook it on the spot, would you have had the slightest inkling of how to proceed without a kitchen and a cupboard full of utensils? The short answer is probably no. Yet here we have two blokes who, through necessity and ingenuity, have overcome all obstacles and achieved their goal. My own accomplishments in this field, to date, had been to warm a meat pie on the engine of an air compressor – which sort of sinks into the realms of insignificance. Josser’s beetroot and the Sanquhar navvy’s trotter are worthy of celebration. Perhaps even a blue plaque. 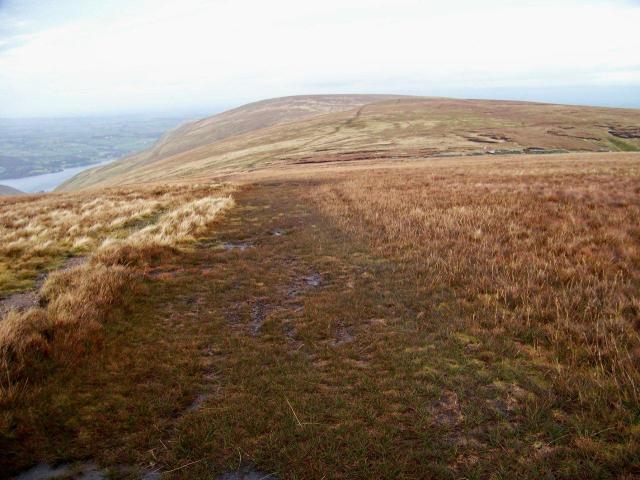 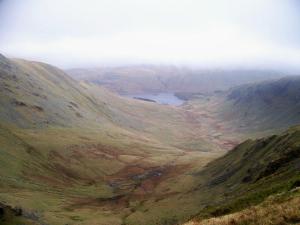 The view down into Riggindale, with Haweswater in the distance

Back to the walk. Gowk Hill’s a funny spot. Gowk is Cumbrian for cuckoo. I can’t hear any so I carry on climbing to the crest of Red Crag where I join the course of the Roman road that runs along the High Street ridge.

I sit for a while in the stone shelter on High Raise, then wander on into the mist to High Street.

The mist comes and goes, and occasionally I get clear views down into Riggindale and the head of Haweswater.

Looking north-east along Bannerdale to Martindale

My aim is to complete the Martindale horseshoe to Place Fell, but at Angle Tarn I decide to call it a day. The weather is deteriorating, with a rainy front moving in. The clouds are much lower than they were when I set out and the air is a great deal damper.

So anyway, I mentioned the Pig of Prague. This is a great dish to cook when you’re camping and in need of a substantial meal. Like trotters and beetroot, it’s not something to tackle in a one-man tent on the Cape Wrath Trail with wind howling in from Malin and Hebrides. But when you’ve got the time and equipment, it makes the perfect end to the day.

My wife invented this meal one cool September night on the outskirts of the Czech capital in a campsite only a five-minute walk from Luka metro station, a site that has soviet-era tower blocks frowning down upon it on one side and open countryside to the other. It’s a great place.

Buy a pig’s shin, shank, hock, or knuckle, or whatever it is you call it in your part of the country. Drop it in a pan, cover it with water, and chuck in as much sliced garlic as you can lay your hands on – masses of it. Season and bring to the boil. Simmer for an hour-and-a-half while supping ludicrously cheap Czech beer. A few minutes before eating time, drop in some fresh green beans and cook until tender.

At this point demonstrate a rudimentary knowledge of European cuisine to anyone watching by drawing their attention to the common root of such classic dishes as the French pot au feu, the Spanish cocido Madrileno and good old British boiled beef and carrots – strain off the liquor into dishes and devour it, hungrily, as a soup course. Then, preferably while listening to Alice Bauer accompanying Pavel Klikar and the Original Prague Syncopated Orchestra (click here if you’ve got nothing else to do), devour the Pig of Prague and green beans.

I drop down into Bannerdale – a valley I have not visited before – on a pleasant path that skirts the foot of Heck Crag and runs across steep screes. I slip twice on wet turf and end up on my back. Wish I could have taken a picture of myself.

Ah yes. Christie Moore. I was once offered the chance of seeing him perform with Planxty in the Cumbrian town of Egremont but went boozing with my mates instead. Looking back, it wasn’t the wisest of decisions. However, Christie sings a song called Delirium Tremens in which he alludes to the Child of Prague dancing around his mantelpiece. After several bottles of Staropramen and some cheap Bulgarian wine, my wife swore she saw a three-legged pig dancing around our tent, so we christened the dish the Pig of Prague.

Martindale is great. You can get to it by steamer along Ullswater from Pooley Bridge apparently. This summer, on a fine day, I might just do that with a rucksack full of beetroot and some pigs’ trotters. I might even take my dad. 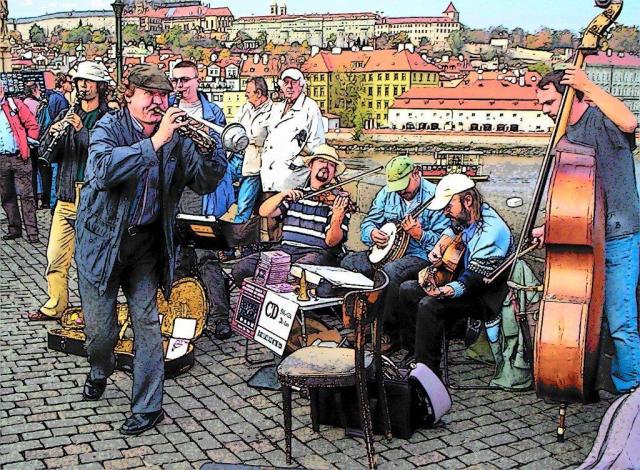