I’M trying to empty my head because there are too many things in it. I don’t know about yours, but mine has a limited capacity and tends to overheat quickly. So in an attempt to purge the clutter, I’ve decided to jump on the road bike and pedal the 29.5 miles from my front door to England’s highest pub, the Tan Hill Inn . . .

I have this theory – as yet unburdened by scientific disciplines – that when drifting beneath wide and empty skies across wide and empty moors, a man can cleanse his mind in a spiritual sort of fashion. The theory seemed pretty sound a couple of hours ago when I was eating my breakfast.

Now that I’m battling into a strong headwind up an eternal and unforgiving slope, things don’t seem so appealing. It’s only after grunting over The Stang – the pass between Teesdale and Arkengarthdale – that the landscape acquires any sense of emptiness and desolation. So I pedal on – a slow and relentless grind into a blustery westerly that does nothing to ease my mental state but plenty to make my legs hurt. 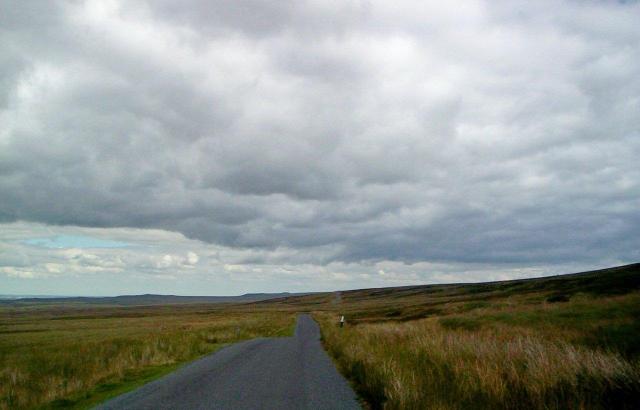 At the Tan Hill Inn I sit in the sunshine clutching a mug of tea (£1.20 and thoroughly refreshing), chatting to a South African woman who is working in the pub on an exchange scheme before taking time out to travel the world. This legendary Pennine retreat, immortalised by the late Ted Moult and his double-glazing advert, is the first stop on her global tour. Soon she jets off to Venezuela to spend a few months exploring South America.

“I’m following the summer around the world,” she says.

I am immediately captivated by this notion of following the summer. This woman is a like a swallow or a swift, swooping on warm currents from one side of the equator to the other. I am uplifted by a sense of weightlessness.

GOING off at a tangent here: it has come to my notice, after several decades of walking through wild and desolate areas, that the wilder and more desolate the area becomes the more chance there is of stumbling across the remains of a railway goods wagon. This one’s on the stony track that cuts down from the Tan Hill Inn to Gilmonby, near Bowes. I’m going to start a photographic collection. Someone has to

I take a different route home, peeling off the Arkengarthdale road a mile east of the Tan Hill and sailing down a rough track across the moors towards Gilmonby and Bowes. The Pennines here are wide and empty – and so are the skies. But emptiness alone is not sufficient to cleanse the mind, I decide. A man needs to swoop like a swallow and think swallow thoughts. Like Hermann Hesse’s Siddhartha watching a heron fly over a bamboo wood, he needs to feel the pangs of a swallow’s hunger and die a swallow’s death.

Sometime later, while pedalling vacantly along quiet lanes, I sit up suddenly in the saddle and realise I don’t know where I am. These hedges, these fields, these farms and woods – they are unfamiliar. Then recognition seeps slowly back. I am on a road between the villages of Caldwell and Forcett – a road I have ridden a hundred times before. But for a few long and panicky seconds, I was completely thrown.

Can swallows empty their heads too much, I wonder? Tweet tweet. Or is this an age thing?