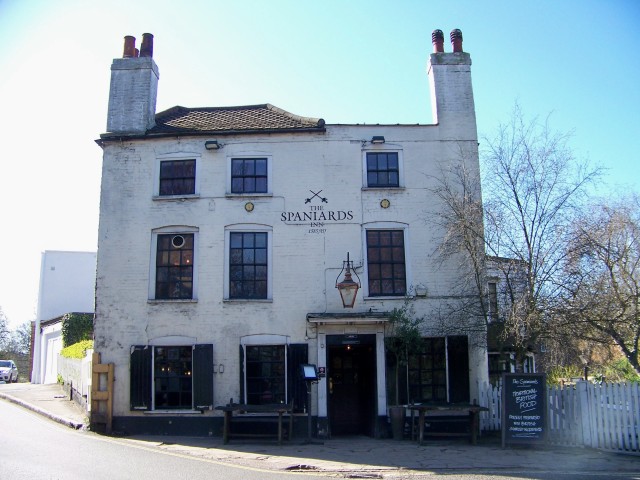 I HAVE a theory about Dick Whittington. After backpacking from the Forest of Dean to London and discovering the streets were not made of gold, it wasn’t the stirring sound of Bow bells that persuaded him to turn again and make the capital his home – it was the steepness of Highgate Hill . . .

And if he had a wife who was hopping from foot to foot and complaining about the absence of public toilets, that would have been a major influence and brought him to a halt.

Dick Whittington, for those not familiar with the tale, was four times Lord Mayor of London (Oh yes he was). Some say he might also have been the most famous Dick to climb Highgate Hill (Oh no he wasn’t). But he was certainly the most celebrated English politician to have had an intimate relationship with a cat (Oh yes he was). Some argue he was also the man who invented pantomime (Oh no he wasn’t).

Occasionally, we wanderers through open places are obliged to commit ourselves to family holidays. These can be turned into adventures – especially if the destination is a city on the scale of London.

What makes London special is that no matter how many weary leagues you wander, how many excellent pubs you visit along the way, and how many pints of Fuller’s London Pride, Wells Bombardier or Young’s bitter are raised to grateful lips, at the end of the day there is always a little man in a little train in a little tunnel who will deliver you safely to your bed. For £7 a day, that’s value for money and good for the environment. And for walkers whose excursions usually depend on several hours behind the wheel of a car, it’s the equivalent of growing wings.

So this is an adventure through one very small part of London and its quirky history. This is an ascent of Highgate Hill to Hampstead Heath in search of Dick Whittington, Karl Marx, the Spaniard’s Inn, Dick Turpin and the Old Bull and Bush. 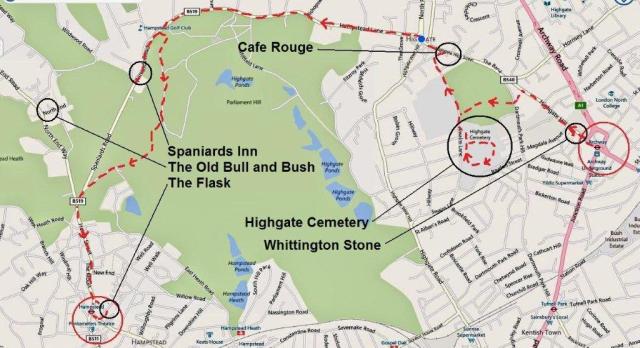 Stage 1: We alight from the Northern Line at Archway tube station. It’s very important to alight here because if we continue to Highgate we penetrate a geological anomaly known as Zone 3, which increases our £7 day ticket to an unknown amount.

Outside the tube station we see a major highway. This is the Great North Road, now known less romantically as the A1, and we are six miles from its starting point beneath the north wall of St Paul’s Cathedral.

Stage 2: We embark upon the long climb up Highgate Hill and soon chance upon a pub called the Whittington Stone. This rather dreary establishment takes its name from a stone marking the place where Dick Whittington is alleged to have heard the bells of Bow and turned around to seek his fortune. His bronze cat is sitting on the stone, but it must be dangerous because it’s in a cage. If you arrive at this point and can’t find the stone, just stand on the pavement and face the pub. It’s behind you.

This is where my embryonic theory about Whittington’s return begins to form. It must have been a hell of a slog up here from the Thames. I bet he was knackered when he reached this point. My wife’s already showing signs of rebellion.

Stage 3: We climb halfway up Highgate Hill and take a sharp left through Waterlow Park to Highgate Cemetery. Its most famous occupant is Karl Marx, the father of socialism. In his immediate vicinity are the graves of investigative journalists Paul Foot and Farzad Bazoft, actor and campaigner Corin Redgrave, author George Eliot – and, curiously, comedian Max Wall.

I once wrote to Paul Foot when he worked at the Daily Mirror. It was so long ago that I can’t remember what the letter was about. What I do recall is that his reply was thoughtful and courteous. Farzad Bazoft was an Observer journalist who was arrested in Iraq, accused of being an Israeli spy and executed by Saddam Hussein. There was a huge outcry. But when the then foreign secretary Douglas Hurd let slip that Bazoft had served time for robbing a bank, the mood changed. Saddam wasn’t all that bad after all, it transpired. Bazoft, who had been investigating an explosion at an Iraqi military complex in the days before the term Weapons of Mass Destruction was invented, suddenly became the villain. Hmmm . . .

So we sit in dappled shade in the delightfully peaceful cemetery, listening to birdsong and the distant hum of traffic, contemplating where and with whom we would prefer to spend eternity – with Karl Marx and his immediate neighbours, or with Douglas Hurd and the remnants of Margaret Thatcher’s cabinet in a cold and unloved mausoleum probably managed by G4S Security. We plump for the former and Highgate. After all, Max Wall’s always good for a laugh. But I expect his silly walk’s a bit stiff these days.

Stage 3: We tramp up Highgate Hill, drink lots of tea in the Cafe Rouge, then follow the B519 for two kilometres across Hampstead Heath to the Spaniards Inn. The 210 bus does this stretch in three minutes for £2.20. Don’t ask me how I know this.

And this is where we step back in time. Immortalised by Charles Dickens in The Pickwick Papers, the Spaniards is one of the oldest pubs in London. It was built in 1585 as a tollgate – and the renovated tollhouse stands on the opposite side of the road. I read somewhere that the name Highgate comes from this tollbar – it being the “high gate” at the top of the hill Whittington never managed to climb. 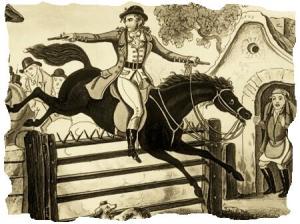 Keats is said to have written Ode to a Nightingale in the beer garden in the days before beer gardens existed (while eating chicken in a basket, I expect), and Bram Stoker incorporated one of the inn’s many ghost stories in his novel Dracula. But its greatest claim to fame – be there any truth in it – is as a haunt of Dick Turpin, the 18th Century highwayman who terrorised travellers in the vicinity before fleeing to York on his faithful horse, Black Bess, and death on the gallows (he was hanged for horse theft after justices of the peace became suspicious when “he shot another man’s cock in the street”).

Nowadays the clientele is more refined. Mind you, there are a couple of loud City types drinking wine in the neighbouring booth who might be regarded as modern-day highwaymen. No wine for me. I’m on the London Pride and Adnams bitter. The smoked mackerel pate with toast is excellent, by the way.

Stage 4: We backtrack down the road rather unsteadily for a couple of minutes then cut across the heath along pleasant woodland paths beneath a perfect sky. Our next destination is the Old Bull and Bush, the pub immortalised in Florrie Ford’s music hall song. The Old Bull and Bush, which started life as a farmhouse in the 17th Century, became a daytrip destination for Cockneys – a Victorian-era McDonalds with jellied eels thrown in – hence its popularity.

Confused by two busy road junctions and confounded by one of our party again hopping from foot to foot and saying “It’s all right for you blokes – you can go in the bushes” (only the ill-advised would contemplate such an action on Hampstead Heath), we give the elusive Old Bull and Bush a miss and drop down to Hampstead and a splendid pub called The Flask, with first-rate Young’s beer, excellent food and adequate toilets with Victorian caricatures adorning the walls.

According to Wikipedia, the Old Bull and Bush has been recently renovated “in the modern, gastro-pub style”. The Flask, though, has remained true to its original decor, minus the sawdust and spittoons. So our walk has worked out well. It could almost have been planned.

We sit in The Flask getting pleasantly merry on good beer and pink wine, listening to jazz and blues and two old blokes talking about the war. This sort of stuff suits me fine. The best bit, though, is knowing that after a walk through history, our little man is waiting in his little train in its little tunnel just around the corner, ready to whizz us back to the other side of the capital and a soft bed and a peaceful night. 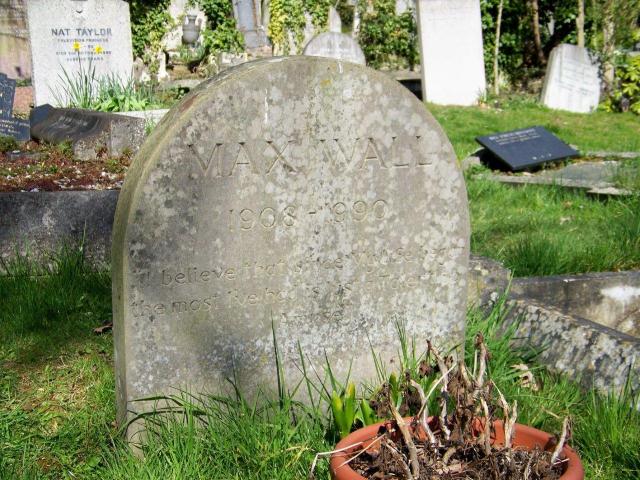 The last word goes to Max Wall. His epitaph reads: I believe that since my life began the most I’ve had is just a talent to amuse 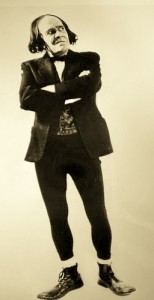