VALLEYS that wriggle into hills. Hills that merge into ridges. Ridges that ascend into clouds and silently collide with other ridges. A man can easily get lost in the Howgills. And I did once. Not truly lost. Just temporarily misplaced at the point where several Ordnance Survey maps joined at the corners . . .

That was in the days when proper maps were an inch to the mile, boots were made of leather and Uncle Jim – God bless him – was in No 10. Stop me if I sound overly nostalgic, but I’ve got the wind behind me and I’m going like the clappers up the bank from Gaisgill into the twisting valley of Uldale. At least it feels like the clappers. These things are probably relative.

Today I’m on a mission that has an objective. A couple of weeks ago, while sitting on the summit of Blease Fell, my gaze drifted south-east to the flanks of Fell Head (2,044ft) and alighted on a path skirting along its higher shoulders and cutting dramatically across some very steep ground.

It looked like a path that was going somewhere, if you know what I mean. It was a path with attitude and altitude – one of those paths you spy from a distance and know immediately that you’ve got to pace its length with determined strides.

And like the man in the flaming pie who descended from heaven and said to John Lennon: “From this day on you will call yourselves Beatles with an A,” the path called to me across the gulf that separates Fell Head from Blease Fell: “I am a path with attitude and altitude and your leather boots shall walk upon me.” And when paths say that sort of thing, you have to take notice.

So I’m heading up Uldale with an inexplicable urgency. Uldale is a really pleasant valley. Like all the valleys in the northern Howgill fells, there’s nothing in it except sheep, fell ponies and grass. People? No, there are no people. Only me.

No matter how empty the Howgills seem, there is always a feeling you’re being watched

And I’ll tell you another thing. All the way along this valley I make little detours to inspect prominent boulders, just on the off chance I might discover the odd Bronze Age cup and ring marking. But I find nothing. Until, that is, I reach the Blakethwaite stone, which stands in a prominent place on the watershed between two valleys and once marked the boundary between Westmorland and Yorkshire. There’s a cup in it. Or is it just a natural hole? Who can tell? Not me, that’s for certain.

The somewhat unimpressive Blakethwaite stone, with Fell Head in the background and my path snaking up the middle before cutting across the shoulder on the right

This is where the path with attitude and altitude begins. It takes me up a steep fellside and across slopes that plunge into Carlingill Beck, many hundreds of feet below. It’s an awe-inspiring place. With the wind under my boots I am elated.

I make a short detour to the summit of Linghaw and sit in the turf watching traffic pass on the M6 – which today feels like an intrusion rather than a companion. Then I branch off my path – which from here descends in graceful swoops to the Lune valley – climb into the mist on Fell Head, manage to misplace myself temporarily again and blunder halfway up Bush Howe by mistake.

Taking it easy on Linghaw 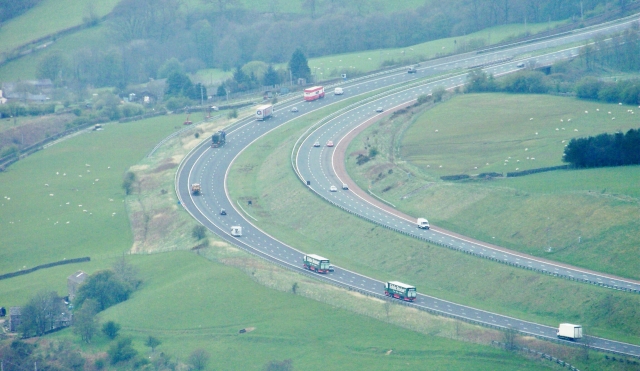 Traffic on the M6 far below

Linghaw from the westerly flank of Fell Head

Have you ever been blown up a mountain by the wind? This happened to me a few years back while ascending Mam Sodhail from Carn Eighe, above Glen Affric. The wind was so strong that it buffeted me up the slope to the summit. It was an exhilarating experience. It happens again today on Bush Howe. A terrific wind wells out of Long Rigg Beck – and up the slope I go like an empty crisp packet. But halfway up I realise that I’m going the wrong way so I come down again in great leaps and bounds with the wind underneath me. At least they feel like great leaps and bounds. Again, these things are probably relative.

Looking down to Long Rigg Beck, from where a terrific wind blows

Another path with attitude and altitude, this one skirting along the shoulder of Wind Scarth

Another path with attitude and altitude takes me across the steep slopes of the appropriately named Wind Scarth to a gap under Docker Knott. I return to Uldale over the summit of Middleton.

It’s been another uplifting day in the Howgills. There was nothing there except sheep, fell ponies, grass and wind. And me. Don’t tell anyone. I’m trying to keep it a secret.

23 Responses to Haunts of Ancient Peace