Days Like This, No 13: Suddenly Night on A’ Ghlas-bheinn 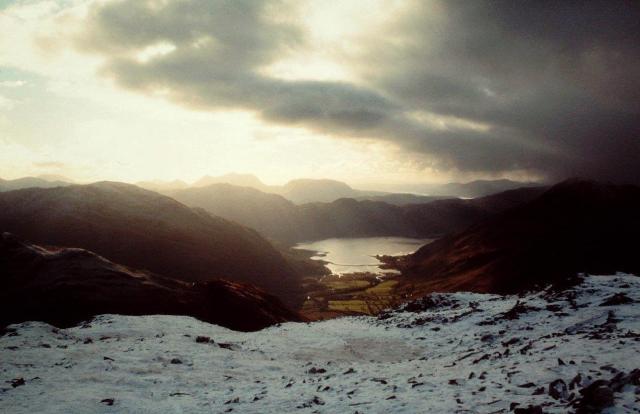 THE ground is white with frost and a sharp wind cuts along the glen from Loch Duich. Heavy clouds roll in from somewhere unknown. The weather forecast is far from encouraging. My wife drops me off at the head of Strath Croe. Then off she drives in a nice warm car. Off I walk into the east, following a grey river along Gleann Choinneachain towards a mountain called Beinn Fhada . . .

Thin rain begins to fall. Through gaps in rolling clouds I catch glimpses of snow on high slopes. It’s not going to be pleasant up there. It will be cold, uncomfortable, and with poor visibility.

Here’s a sobering thought. According to this morning’s TV news, today is the 198th anniversary of Admiral Lord Nelson’s death at Trafalgar. Poor old Horatio – the hero of the Battle of the Nile and the bombardment of Copenhagen – copped a bullet in the bosom.

That puts things into perspective as I slither about on wet ice and mud. Not only did Nelson have to watch where he put his feet in all the blood and mayhem, and command the British fleet at the same time – he had to dodge French snipers too. 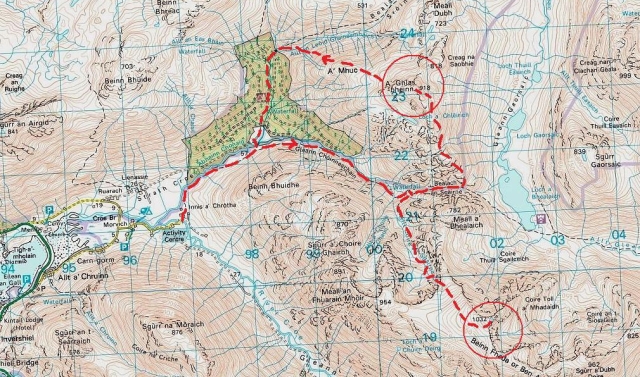 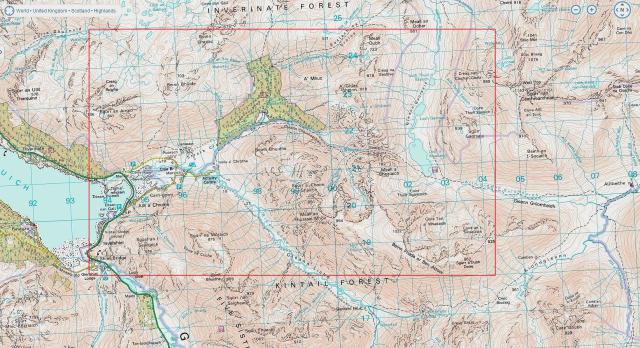 Beinn Fhada, which also rejoices in the name Ben Attow, stands at an altitude of 1,032m (3,385ft) in the mountain wilderness between the Great Glen and Glen Carron. It’s lonely country this. It seems even lonelier today as I climb into the clouds and enter that bleak zone where thin rain becomes powdery snow and wind scours your cheeks.

I follow a zigzagging stalker’s path onto the summit plateau, and with the help of my compass locate the cairn with little trouble. But now I’ve a decision to make. My plan was to head due north from the summit to a subsidiary peak called Meall a’ Bhealaich then drop down to the pass of Bealach an Sgairne, but the guidebook says this is best avoided in bad weather because of the steep terrain.

So I play it safe and retrace my steps down the stalker’s path to the relative shelter of Gleann Choinneachain, where a thought occurs to me. It’s still pretty early. If I step out I’ve time to climb the neighbouring peak of A’ Ghlas-bheinn (918m, 3,011ft). But I’ll have to look sharp. So off I shoot to the top of the pass then veer north up steep ground as sunlight breaks through gaps in the clouds.

I reach the top of A’ Ghlas-bheinn as the sun goes down and daylight fades. Freezing wind whistles through the stones of the summit cairn. I’m in a very cold and lonely place on proud and secluded mountains and I wish I was somewhere warmer. So I plot a north-westerly course down a shoulder called A’ Mhuc and descend gingerly into the welling gloom. 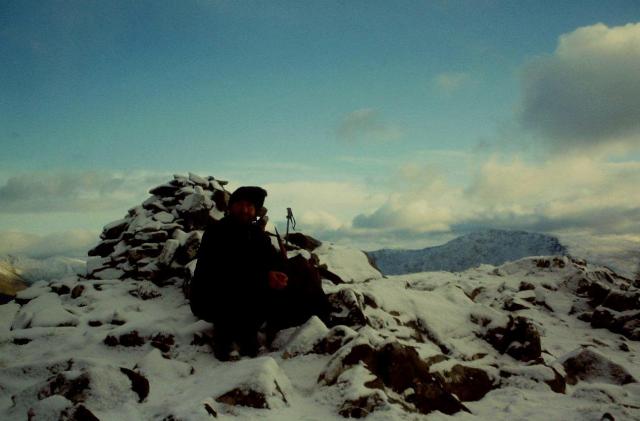 By the time I reach the valley the darkness is complete. I have my Petzl head-torch so at least I can see where I’m putting my feet. But a couple of miles of steady walking along forest trails lies in front of me before I reach the car park at Innis a’ Chròtha in Strath Croe.

There is something satisfying about walking through mountains at night. Perhaps we’ve inherited some spark of memory from ancient times when our ancestors lived half the winter in total darkness, and it was second nature to rely on senses other than sight.

Or perhaps it’s the thought of a peat fire, a hot bath, a fish supper and a bottle of whisky that raises the spirits and keeps the arms swinging.

Darkness fell suddenly on A’ Ghlas-bheinn on October 21, 2003

32 Responses to Days Like This, No 13: Suddenly Night on A’ Ghlas-bheinn