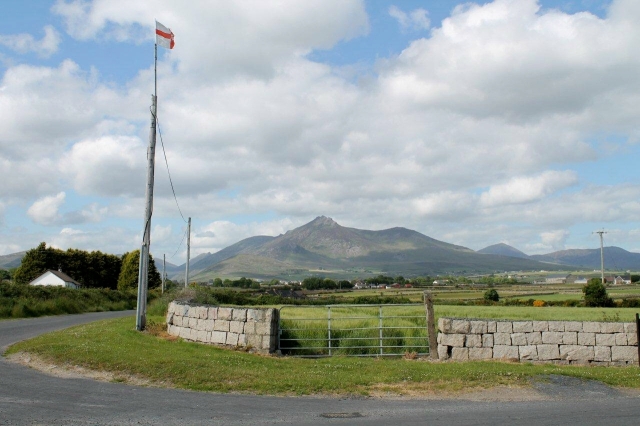 EARLY morning sun warming a bank of dog daises and purple clover as I lace my boots. Walls made of boulders, dykes of yellow gorse, meadows of lush grass. Two telegraph poles painted red, white and blue. A stone road bridge with its parapets painted red, white and blue. And above the walls and the dykes, and the rustling green trees, rises a steep stony mountain with its head in white cloud. This is Slieve Binnian. And this is County Down . . .

Viewed from the south-east, Slieve Binnian is a fine pyramid of a mountain topped with granite tors. A stone wall climbs up its steepest aspect to a crown of crags ??? this is the Mourne Wall. Not many walls have capital letters ??? Hadrian???s, China???s, Berlin???s, possibly Belfast???s Peace Walls ??? so the Mourne Wall is a member of an exclusive club. (click on images for high-res versions) 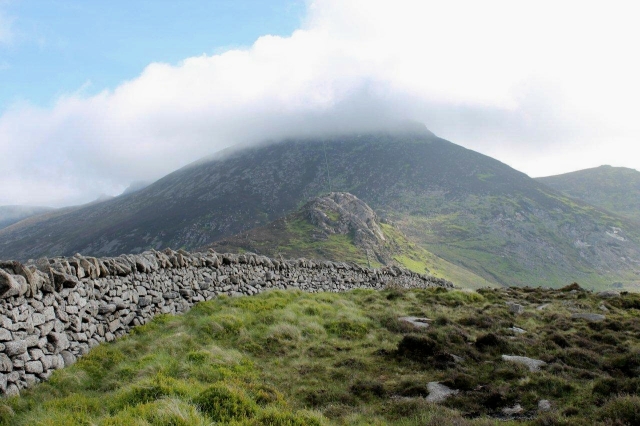 The wall was built between 1904 and 1922 to enclose the catchment area of the Mourne reservoir complex and has a total length of 22 miles (35km). Wikipedia says it was built by Belfast Water Commissioners, but I???ve a feeling that lads wearing ragged trousers and flat caps did most of the hard work. At the time, the wall was considered by some to be an extravagant and perhaps unnecessary construction scheme ??? but others maintained it kept a lot of men in employment and fed a lot of families during a period when poverty was almost endemic. Sounds like a worthwhile project, if you ask me.

My plan for today was (note the past tense) to follow the wall over the knobbly summit of Wee Binnian and straight up the front of Slieve Binnian to its granite crown ??? but from below this looks a little bit tricky. So I skirt around Slieve Binnian???s knees to a shallow gill on its south-east slope, follow a rattling stream to a windy col, and hop onto the highest granite tor with the sun in my face and the wind in my T-shirt. Slieve Binnian, by the way, has a height of 747m. That works out at 2,451ft. 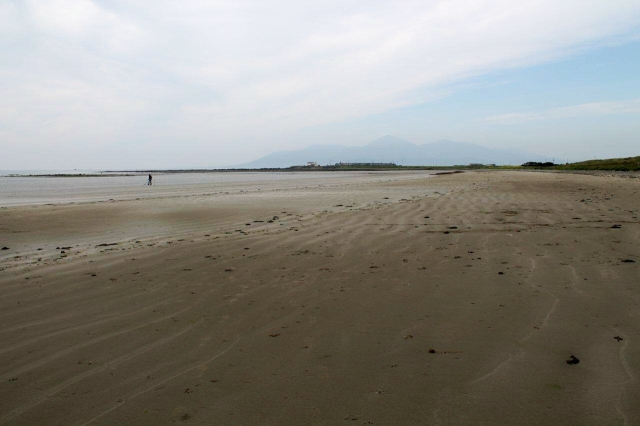 My first impressions of the Mourne mountains were of blue humps on the periphery of the Irish Sea one summer???s evening. On a clear day they can be seen from Lakeland???s western fells ??? dark ripples on the horizon beyond the firmer shape of the Isle of Man. For more than thirty years I???ve been glimpsing them slipping in and out of view. Now here they are, stretching beneath my feet in wonderful ridges of bare stone, tufted grass and scree. (The picture above was taken from near Coney Island, just south of Ardglass) 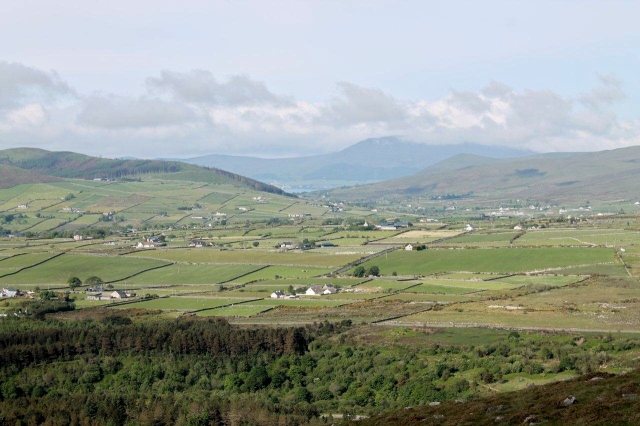 I reckon this is a round trip of about 20km (12 miles) with a great deal of climbing, descending, and climbing again. But for now I???m going to spend a few pleasant minutes sitting in the sun on the top of Slieve Binnian, gazing out across Carlingford Lough to the green hills of the Republic while mulling over the events of the past couple of days and whistling Carrickfergus. 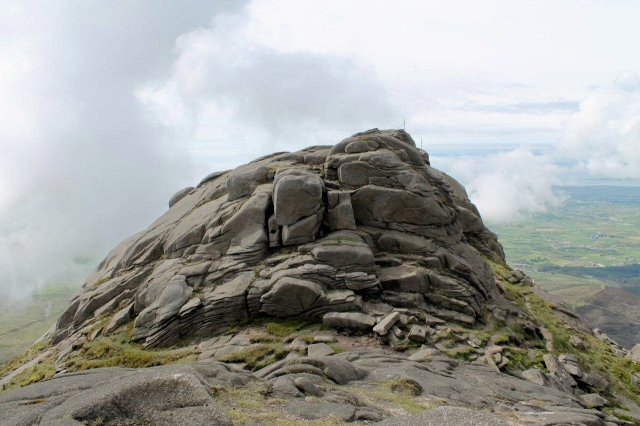 Second impressions of the Mournes: Driving down the A1 from Banbridge to Newry with the mountains hidden by cloud off to the left. The car in front swerves suddenly to avoid an object lying in the road, and I swerve instinctively behind. I glimpse the object in the middle of the fast lane as we fly past. It???s a shovel. A bloody shovel. Two hundred yards further on a yellow council truck has pulled onto the hard shoulder and four blokes in orange jackets are standing at the roadside gazing back at their shovel. Van Morrison???s singing Carrickfergus on the car stereo, a song that always makes my wife fall silent. ???They???re looking for their shovel,??? I say. She nods. The mountains remain hidden.

More second impressions: Still capped with dark clouds, the Mournes loom over the seaside town of Warrenpoint. I???m in an Around a Pound shop looking for a box of matches while Anne buys a pot chicken. It???s one of those shops that looks narrow at the front but goes back about seven furlongs. There???s an old guy following me around, which is a bit unsettling. He shuffles along the aisles muttering to himself. He???s the sort of bloke I know is going to engage me in futile conversation. ???How are ye? Eh? How???s yersel? Was it you Ah was talking to yesterday???? That sort of conversation. I dodge down an aisle but he shuffles after me. I double back, and just as I pass him he stops, grunts, and turns to a shelf stacked with balls of wool. I watch him from a discreet distance. He slips a hand into his jacket pocket and withdraws a short length of the yellowest wool I have ever seen. It is yellower than daffodils and primroses. He holds the thread up to the various shades of wool balls, finds one that matches, stuffs it under his arm and shuffles off towards the counter. ???How are ye???? he says as he passes.

More second impressions: Quite unintentionally, certainly by accident, without the merest thought premeditated or otherwise, I manage to reverse the car down a flight of steps in a 17th Century farmyard on the outskirts of Kilkeel. Everyone is very concerned. Several people, who have emerged from surrounding buildings, are even mildly amused as well as being concerned. A nice lady called Lily phones a farmer, and the farmer says he???ll be along with his little blue tractor to tow me out, because the car won???t climb steps unaided. Apparently, my Suzuki Ignis is designed to travel on smooth surfaces and not up steps. It begins to rain and everyone retires to the buildings ??? including my wife ??? leaving me standing in the wet waiting for a man called George, with the car reclining at a jaunty angle not unlike Thunderbird 2 on its launch pad. After twenty minutes the rain ceases and shafts of sunlight crack through clouds and illuminate glistening meadows and banks of golden gorse. Beyond the fields, black mountains raise their shoulders to the skies. The nearest, and most spectacular, is Slieve Binnian. I must climb that mountain, I decide. Chug, chug, chug. Here comes George. 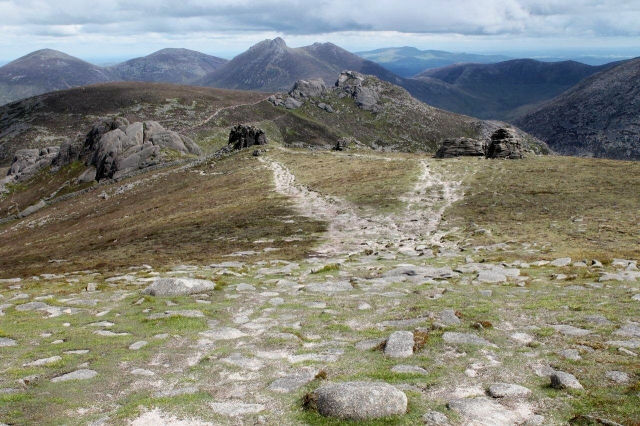 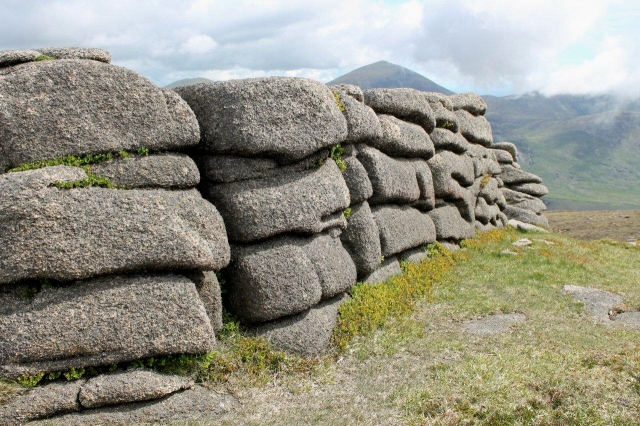 That was yesterday. Today is today. I leave the summit of Slieve Binnian and pass a formidable array of granite formations on the path along the ridge before dropping down to a col above Blue Lough then ascending a very steep 300m (call it 1,000ft) rocky slope to the summit of Slievelamagan. At this point the mist comes down and I am joined by three lads from Belfast. 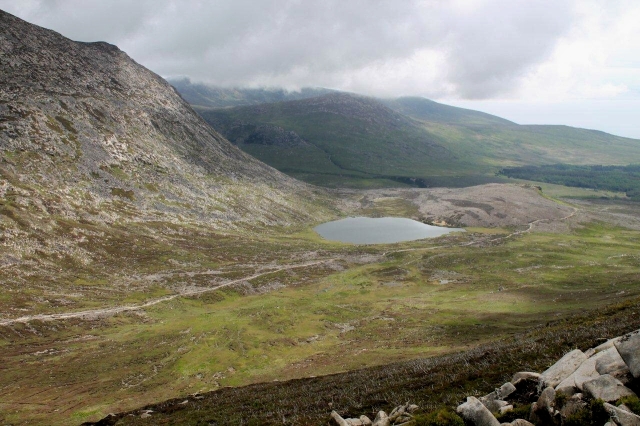 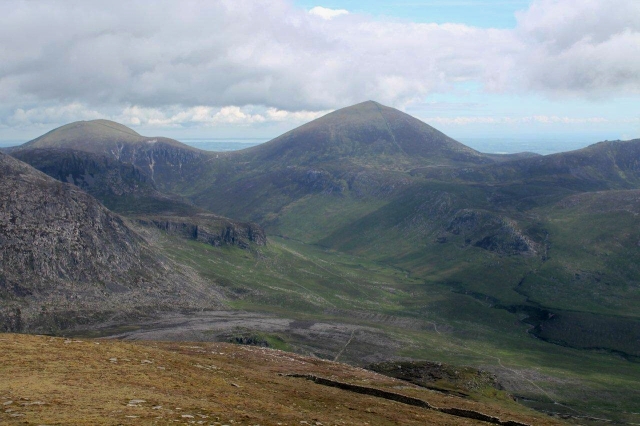 ???This your first time in the Mournes???? says one of the lads, after establishing where I am from. I answer in the positive.

Up here in the mountains we???re all lads. Down in the towns and villages, lampposts are decked with Union flags, red-handed Ulster flags and Irish tricolours. Kerbstones are painted red, white and blue or green, white and orange ??? not everywhere by any means, but just enough to remind the visitor that deep undercurrents of tradition, suspicion and desperation are allowed to gush through this country like blood through the veins of a tortured animal. But up here, away from the flags and the passion, we???re all lads. Quite where women fit into the equation is something I have yet to discover. 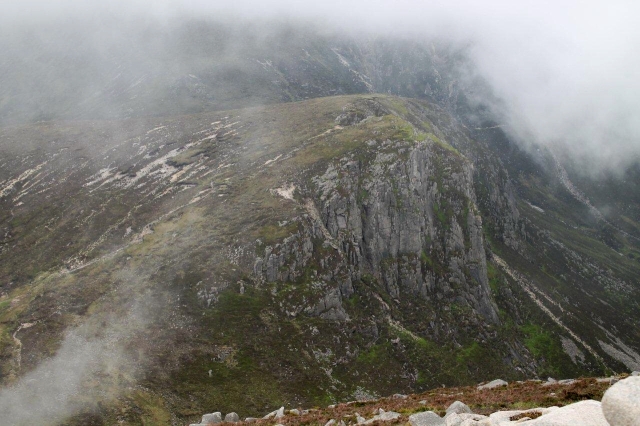 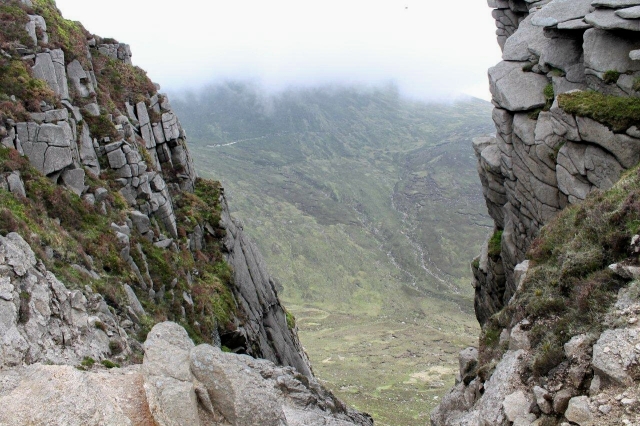 Cove Mountain and Slieve Beg are surprisingly craggy, their eastern faces falling to the Annalong River in scenes to rival any Lake District dale head. As the mist swirls around them I gaze in appreciation, wondering why I haven???t come here before.

That???s the interesting stuff dealt with. From Slieve Beg I rattle down to a col beneath Slieve Commedagh, head west along a good path for half a mile, then labour south across steep fellsides to the northern tip of Ben Crom reservoir and then the Silent Valley reservoir. The return journey is a trudge along lumpy paths and water board roads ??? a reservoir slog.

Back at the car, boots thrown off into dog daises and purple clover, I have time to chew over the day???s walk. The Mourne mountains are much craggier, wilder and spectacular than I had ever imagined. They are much more than a distant ripple on an Irish Sea horizon. They have an identity, a uniqueness that sets the mind racing.

Like the lad said. The Mournes are Northern Ireland???s best-kept secret. 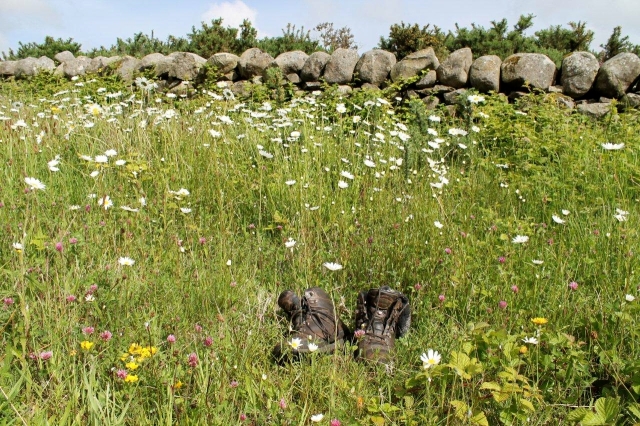