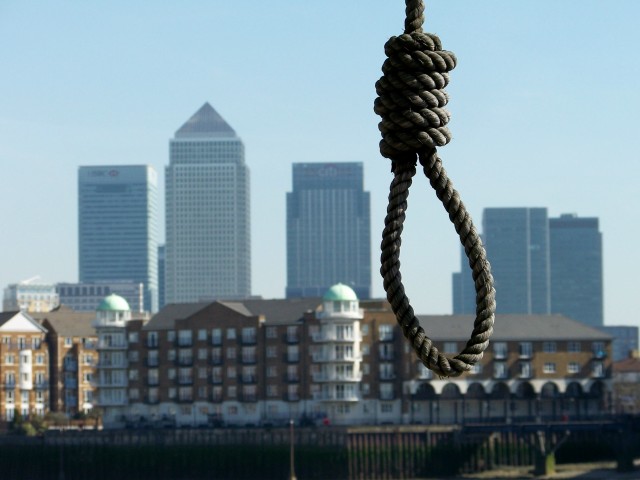 THE name Whitechapel has a ring to it that awakens childhood memories. It’s the brown square on the Monopoly board along with the Old Kent Road. It is also where Jack the Ripper butchered his victims and has associations with the Elephant Man and the Krays. But Whitechapel is more colourful than Monopoly brown. And it’s a great place to start a walk through London’s quirky history . . .

Did I say the name has a ring to it? How convenient, because Britain’s oldest commercial company, the Whitechapel Bell Foundry, is situated on Whitechapel Road. That’s a suitable place to begin a walk through the East End. Then we’re off in search of Cable Street, where the forces of good clashed with the forces of evil in the 1930s, and on to Wapping’s riverside pubs and the infamous Execution Dock, where convicted pirates met their grisly end at low tide. It’s low tide at the moment, so it sounds like a plan.

Stage 1: We emerge from Aldgate East tube station and stand blinking in the sun and totally disorientated. The best thing to do, we decide, is have a coffee at a pavement cafe and get the maps out while attempting not to look like tourists.

Whitechapel and Wapping have fallen off those free street maps that are handed out in hotels and tourist information centres. Aldgate East tube station is right on the edge – but within a hundred metres the known world ends. If we tumble off we might not be able to climb back on again. So we drink our coffee and take a bearing from the sun.

Stage 2: We are still at the start of Stage 1, but I have determined – after walking in circles and hunting down street signs – that we’re on the junction of Whitechapel High Street and Whitechapel Road. If I had sixty quid in Monopoly money I could buy this place.

A short stroll east-north-east along Whitechapel Road – also known as the A11 – brings us to a quaint and tiny establishment that has produced industrial goods continuously since at least 1570. The building was originally a coaching inn called the Artichoke, but for most of its life has been the home of the Whitechapel Bell Foundry – which according to the Guinness Book of Records is the oldest manufacturing company in Britain. Its products include Big Ben, the US Liberty Bell and many of the famous bells listed in the children’s rhyme Oranges and Lemons. That’s a back catalogue to be proud of.

Entry to its tiny museum is free. You just open the door (which naturally rings a bell), a nice man comes out of an office and says “Take as many pictures as you like,” and off you go. We spend half an hour poking around the exhibits and buying Whitechapel Bell Foundry pencils. On Saturdays, when the blokes aren’t pouring hot metal into moulds and tuning bells, it’s possible to tour the foundry. Not today though. 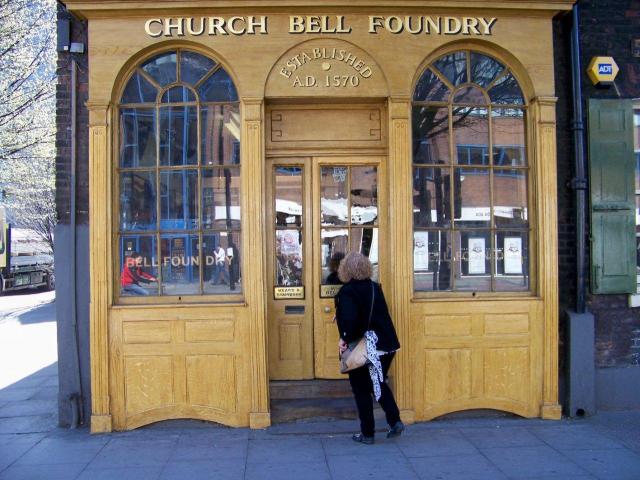 Stage 3: Plumbers Row is a backstreet that runs down the side of the foundry. It might have been named after a chap called Plumber or possibly the plumber’s merchants which exists to this day. Alternatively, in the dark days of mediaeval London, it could have been where many of the original plumbers – the craftsmen who roofed churches with lead sheets and installed lead gutters and pipes – had their yards (the word plumber is derived from the Latin word for lead: plumbum). Plumbers would have been perfect neighbours for the chaps who cast and installed church bells. That’s what I think anyway.

We wander down Plumbers Row and cross busy Commercial Street (the A13), then follow Back Church Lane under a railway arch to its junction with Cable Street.

Stage 4: A bit of political history now. In 1936 Sir Oswald Mosley, the 6th Baronet of Ancoats, led his British Union of Fascists blackshirts into a predominantly Jewish area of the East End on a march that was protected by police. This provoked a huge backlash from the Jewish community and left-wing activists that resulted in the Battle of Cable Street. Here’s a warning about believing everything you read in guidebooks. The following statement appears in Secret London – An Unusual Guide, one of the books in my bag:

“It was more a matter of barricades and name-calling than actual fighting.”

My wife and I have taken part in enough anti-poll tax, anti-pit closures, anti-Iraq War and anti-Tory cuts protests to know that instances of obstruction and verbal abuse do not go down in history. The person who wrote that has really got my back up. Big time.

The Battle of Cable Street is commemorated in a gable-end mural that’s worth visiting for its artistic value alone. It depicts the clash between left and right in the days immediately preceding the Second World War and at a time when that other struggle between political opposites – the Spanish Civil War – filled the headlines.

Between 250,000 and 300,000 anti-fascist demonstrators turned out to block the march. More than 10,000 police officers – 4,000 on horseback – were despatched to clear the roads to allow the fascists to proceed. Following a series of clashes, 150 people were arrested, 175 were injured, and a number of police officers were kidnapped by the demonstrators. Mosley’s march was eventually abandoned.

For the record, the demonstrators were organised by a chap called Phil Piratin, who was elected Communist MP for Mile End in 1945. Sir Oswald Mosley, meanwhile, spent the war interned under Defence Regulation 18B in the grounds of Holloway Prison. Wikipedia has an interesting picture of him taking a salute with Mussolini. 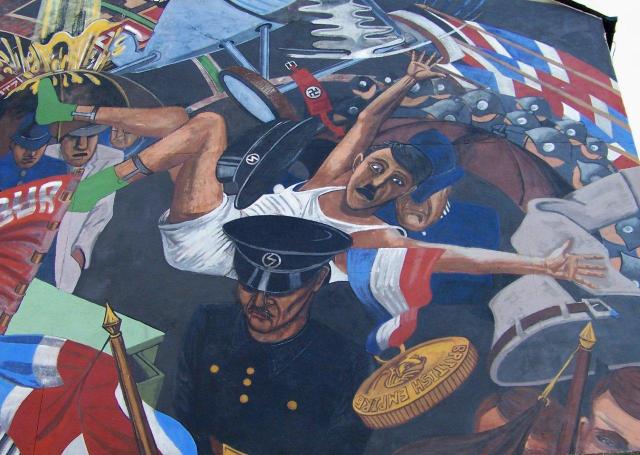 Stage 5: There’s an old churchyard behind the mural that’s been turned into open space and is a pleasant place to sit. From here we cross an extremely busy road known as The Highway (the A1203) before entering the relatively peaceful Wapping Lane, which meanders between Victorian warehouses to the curiously quiet Wapping High Street and the river. 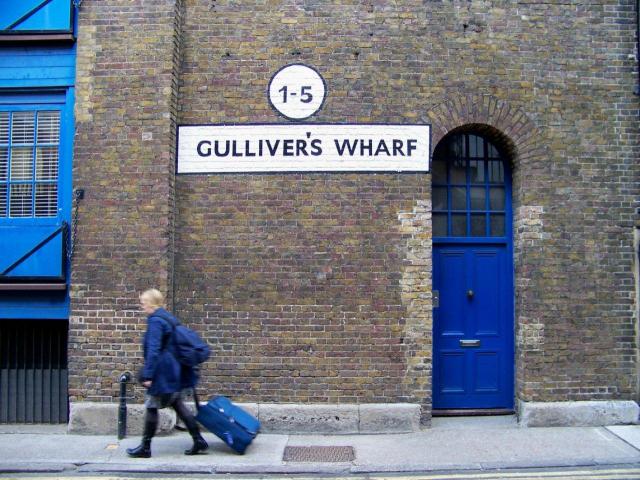 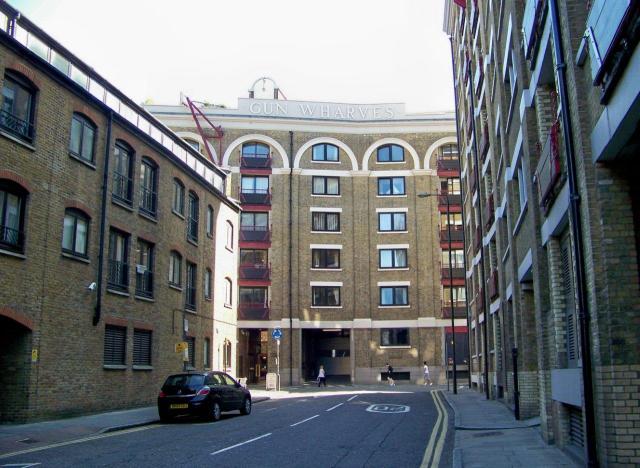 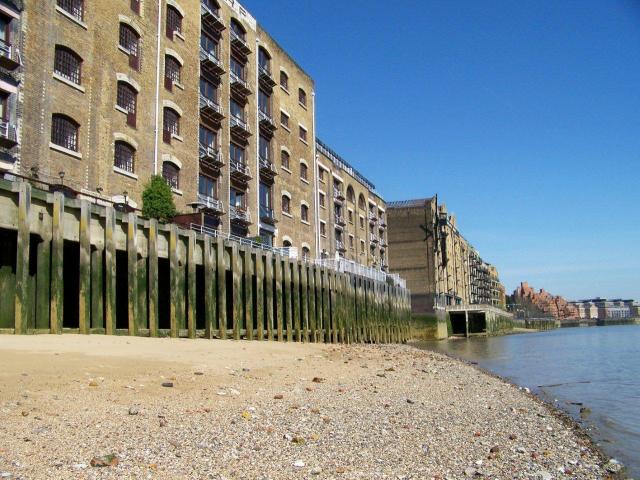 The Thames Path cuts through upmarket apartment blocks to the riverfront at this point, and it’s worth making the effort to go through all the iron gates marked “Private – keep out unless you know your rights, in which case you’ll be aware of the rather pertinent fact you can walk anywhere you like” (or words to that effect) because this is – as far as it’s possible to ascertain – the site of the infamous Execution Dock. 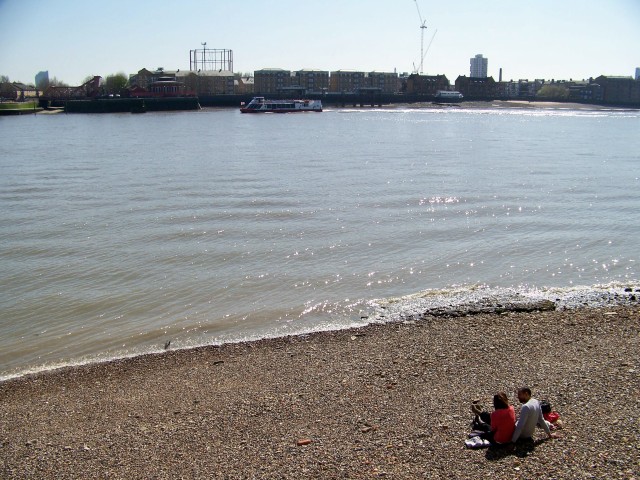 Hands up any pirates reading this. Prior to 1830, anyone found guilty by an Admiralty court of a crime committed at sea that warranted the death penalty (which was most of them) was taken to the gallows beneath the low tide mark and hanged by a short rope that strangled the transgressor rather than broke his neck. His body was left dangling for three full tides. Quite what the second and third tides achieved that the first tide didn’t is beyond me. But there you go. After three tides, the really bad guys had their bodies tarred. That’s what happened at Execution Dock. So next time you’re on a cross-Channel ferry, don’t make an arsehole of yourself in the bar. Hands down.

We continue east along sections of the Thames Path and Wapping Wall, between impressive warehouses that have been converted into flats, to what is surely the most welcoming site in Wapping – one of England’s oldest, most cherished and most atmospheric pubs: the Prospect of Whitby. 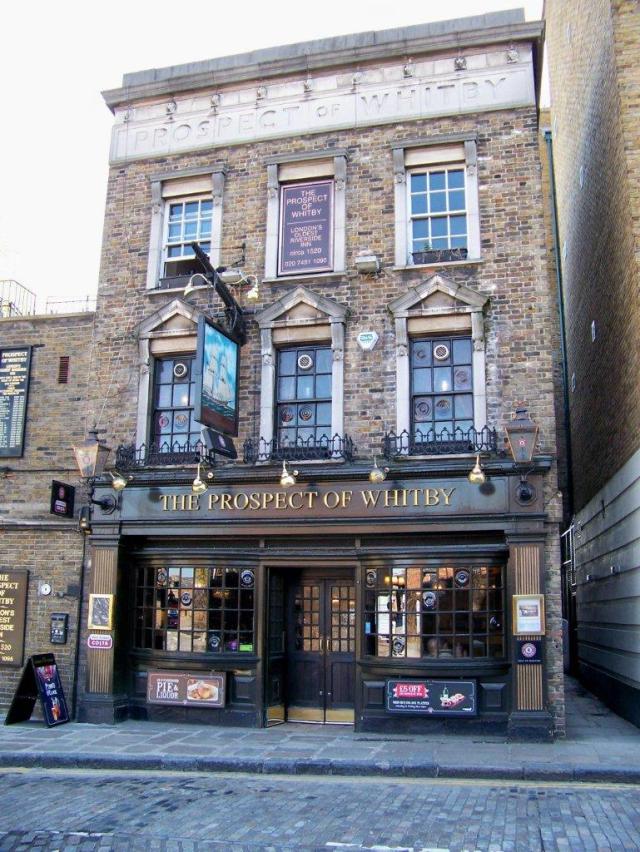 Stage 6: This stage confines itself to the pub because it’s worth exploring. The Prospect of Whitby, which was built in 1520 and is London’s oldest riverside pub, retains its original flagged floor, has a zinc-topped bar (there’s a reason for this but I can’t remember what), and has ships’ masts and barrels incorporated into the structure. Like all good pubs it’s a maze of rooms, staircases and open bits. With panoramic views along the Thames to the Isle of Dogs and Canary Wharf, it is the most pleasant place in the world to sit and sup a couple of pints. And lunch? Well, a plate of pie, mash and liquor is good traditional East End fare. I’ll tell you what, though, you couldn’t run up Helvellyn afterwards.

Being located in the vicinity of Execution Dock, the Prospect of Whitby also has its own gallows. I’m assured it is purely for effect. The observant will have noticed from the opening photograph that, when viewed from the pub, the noose is swinging across a backdrop of Canary Wharf – one of the world’s principal financial centres and the base of Britain’s burgeoning bonuses bonanza. There’s a certain poetic symmetry about this. I really don’t think I need to say any more.

Stage 7: We backtrack to the Wapping Lane junction but continue along the riverside on a westerly course between more converted warehouses and past a pub called the Captain Kidd. William Kidd was a Scotsman who was hanged at Execution Dock on May 23, 1701. Apparently the rope broke on the first attempt so they had another go. His body was left to dangle in an iron cage for three years over the Thames at Tilbury Point.

The big mistake 17th and 18th Century pirates made was to steal from rich people. Nowadays they’ve got it sorted – steal from poor people instead and get a knighthood.

Eventually we sight our final port, another remarkable old pub. The Town of Ramsgate must win the prize for being the longest and narrowest alehouse in the land, and has a delightful though equally narrow and diminutive suntrap of a terrace that backs right onto the Thames. The tide is now high, by the way, and the gibbets are covered. 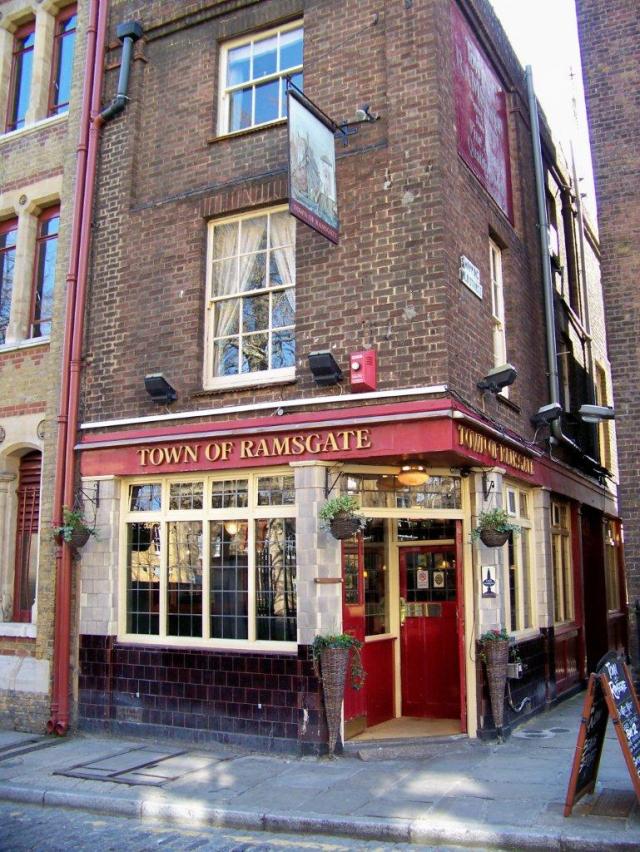 At the side of the pub, a flight of steps known as Wapping Old Stairs leads down into the water, and this is where fishermen from Ramsgate apparently landed their fish for the London market. There’s a website that says the pub was originally called the Red Cow, after a barmaid with red hair. I don’t believe that for a moment. But it serves a good pint of London Pride (pulled by a barmaid with blonde hair), and to sit in the sun with the Thames lapping under the wall, sipping that golden brew, is the most delightful way to spend an hour or so. Possibly two hours.

Stage 8: We backtrack again to the junction of Wapping Lane, where Wapping tube station is conveniently situated. A man in a little train will take us back safely into “tourist map” London. Alternatively, we could have continued west along the Thames Path to St Katharine’s Docks under Tower Bridge. But we’ve been there before. And to tell you the truth, we’re a bit too full of beer.

FOOTNOTE: On the way back to the tube station we find a park and take the sun while watching boats chug up and down the Thames. Unfortunately, we’re obliged to sit on different benches in case we get into trouble. 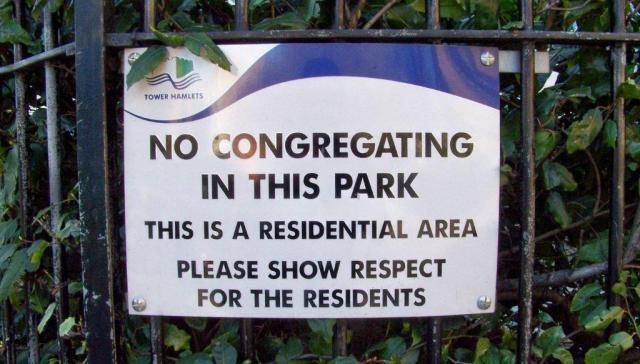