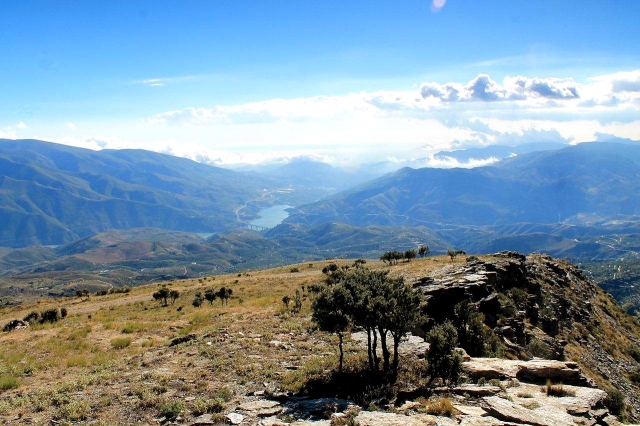 I RISE at 6am because the thought of wandering through olive groves by the light of a headlamp and climbing mountains as the sun floods the sky appeals to me. But as I’m getting dressed, silent flashes which momentarily transform a black world into vivid monochrome signal the approach of an autumn thunderstorm. The storm spreads its unseen clouds and the constellations are slowly wiped out. Thwarted, I return to my bed, still wearing my walking gear – though having had the good manners to remove my boots – to await the dawn and a change of fortune . . .

Daylight brings a fresh world of glistening leaves and red puddles. The storm is still rumbling away to the east, but by 9.45am the sun is cutting holes in slabby grey clouds and bits of blue are poking through. I pull on my boots, sling my pack on my back and close the door behind me.

In the olive groves I see an old man and his son watering the roots of cherished trees. This seems a bit perverse, considering a thunderstorm has just drenched the land, but for the first time since June the acequias – the irrigation canals – are running, bringing fresh water from the high peaks of the Sierra Nevada.

There was snow on the summit of Cerro del Caballo (peak of the horse) earlier this week. It has gone now – melted and soaked into the land to feed the springs. Running water is a strange sound up here. But it’s a very welcome sound. 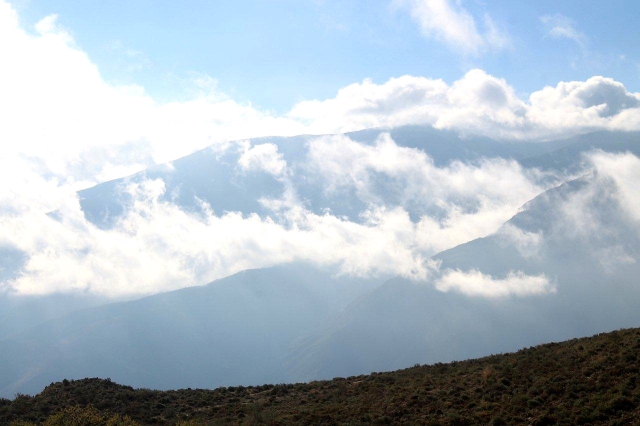 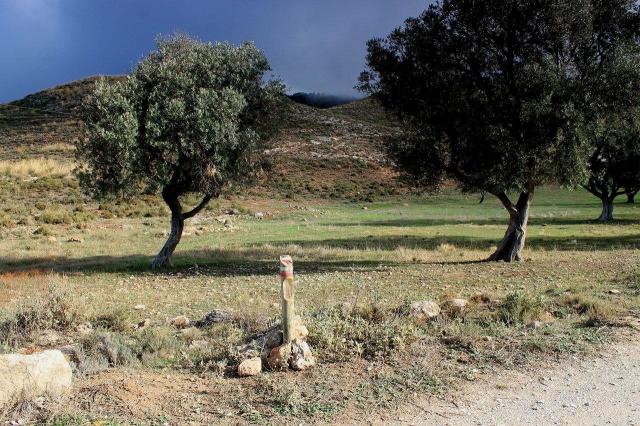 A considerable amount of thought has gone into planning today’s walk, not least because this is my first foray into the mountains since migrating to Andalucia in July and I don’t want to make a mess of it. Rather than head for the high tops – some of which I have climbed on previous visits – it is my intention to explore the middle reaches of this spectacular range. After all, the Sierra Nevada is the highest mountain range in south-west Europe, so there is no shortage of ground to explore.

By 10.30am I’m standing on the GR 7 long-distance footpath, high in the pasturelands between the towns of Lanjarón and Órgiva. The GR 7 will take me to the village of Cañar, from where I will veer up the southern slopes of Pico del Tajos de los Machos to join another long-distance footpath, the GR 240. A forestry track will then take me by a circuitous though hopefully leisurely route back down the mountain to my starting point. The mean vertical distance of today’s undertaking is 1,098m (3,602ft), plus some unavoidable ups and downs.

Cañar is already visible, its white walls gleaming beneath the retreating storm clouds. Between me and the village lies the Rio Sucio in its narrow gorge. The GR 7 takes me into the gorge by a steep and slippery route, crosses the river by rickety footbridge, then climbs into the sunlight across some precipitous ground, the pathway cut into the cliffs in places. It’s quite spectacular and, I must say, unexpected. 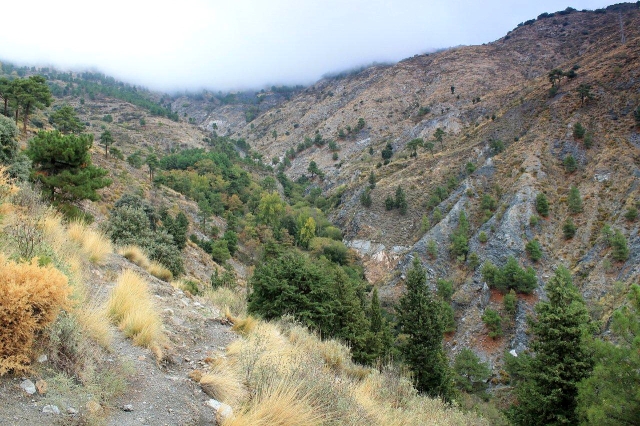 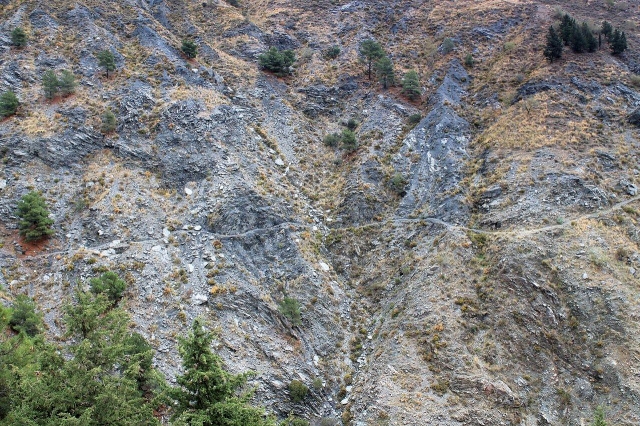 The GR 7 cuts across the cliffs of the gorge

I am welcomed into Cañar by a very noisy dog which pursues me along a lane, snapping at my boots. I have been told by numerous people, since moving to Spain, that the time-honoured method of dealing with noisy dogs is to bend down and pretend to pick up a stone. This never fails, apparently.

So I bend down and pretend to pick up a stone. The dog clears off but returns, barking, seconds later. I bend down again and choose a suitable cobble, which I hurl at the dog – just missing it. The dogs yelps, runs away, then regards me from a safe distance with sad eyes and a pained expression, as if I have broken the rules.

I feel bad about the dog. But it took me more than fifty years to learn that you don’t get anywhere in this world without breaking rules. Perhaps both of us are on a learning curve, with the dog enjoying the distinct advantage of learning faster than me. 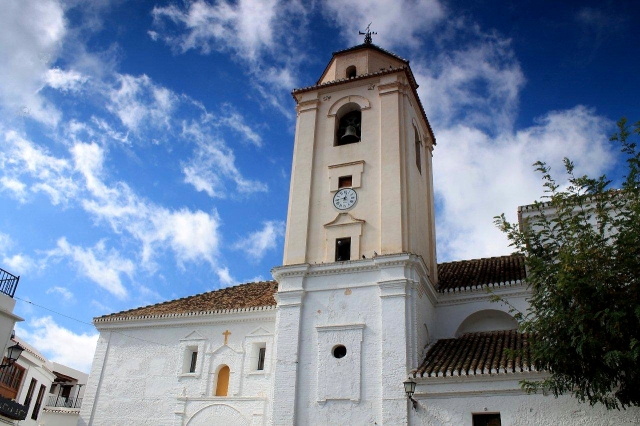 Cañar is one of the Moorish villages of the Alpujarras – the area of foothills and lush valleys between the Sierra Nevada and the coastal mountains – and at an altitude of 1,030m (3,379ft) is also one of the highest. Its white-walled church was originally built as a mosque; its streets are barely wide enough to allow the passage of a donkey and panniers. For those with time to spare, it’s a pleasant place to tarry.

Not me, though. I had a late start and the GR 7 was rougher than expected. I take an old mule trail from the village and climb, in a series of zigzags, up the slopes of the Sierra Nevada to a forestry track (the GR 240) that cuts almost horizontally around the mountains at an altitude of about 1,720m (5,643ft).

It’s during this climb that I realise I am not in the best of conditions. I haven’t undertaken a serious walk for six or seven months, and although I run and cycle several times a week, nothing prepares the body for mountain walking as thoroughly as the activity itself. By the time I reach the forestry track I’m experiencing leg cramps, I’m sweating profusely, and I’ve consumed nearly two litres of water. I sit myself in the dust – somewhat stiffly – eat a sausage and a carrot, and thank God (and Allah, just to be on the safe side) that my route does not take me any higher. 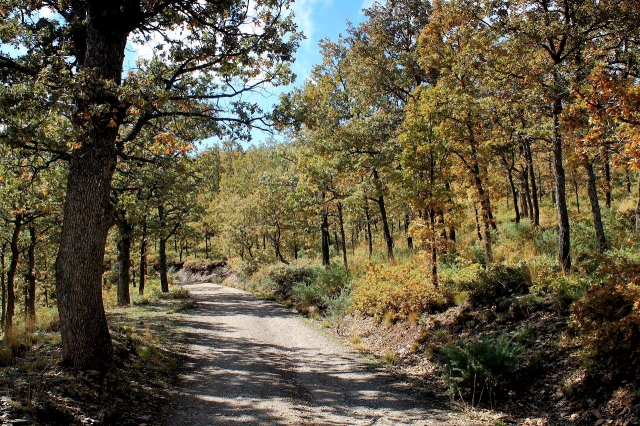 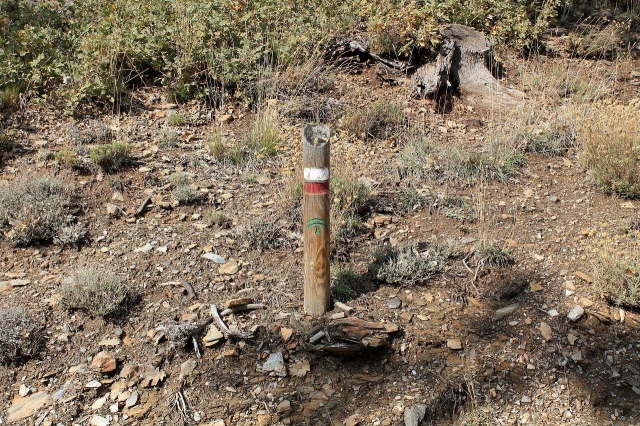 A welcome marker post on the GR 240 long-distance footpath. It’s all downhill from here 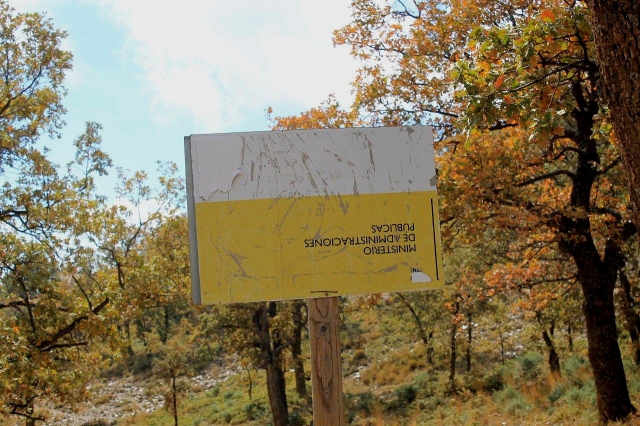 By mid-afternoon the storm clouds have retreated far into the east. My route lies in the opposite direction along the forest track into the burning sunshine, and beneath boughs of oak adorned with autumn colours. By 4pm I have begun my descent down a craggy spur overlooking the gorge of the Rio Lanjarón. The blue ridges of the Sierra Tejeda y Almijara rise in the west, the grey-green bulk of Sierra de Lujar in the south. A smudge of Mediterranean fills the gap between the two. 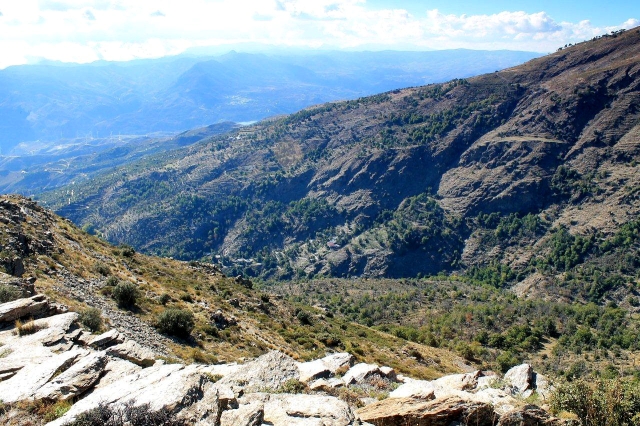 At the 1,300m (4,265ft) level I pass flat-roofed shepherds’ huts and squat houses surrounded by scrubby plantations. Further down the mountain the pastures become greener, assuming an almost Alpine quality. This is enhanced by the sound of cowbells, although I suspect the animals – all of which are hidden from view – are goats rather than cows.

Nearly home now and my legs are as stiff as planks. Down in the olive groves the old man and his son are still watering their trees. We’ve all had a long day, it seems. But I bet my feet are sorer than theirs. 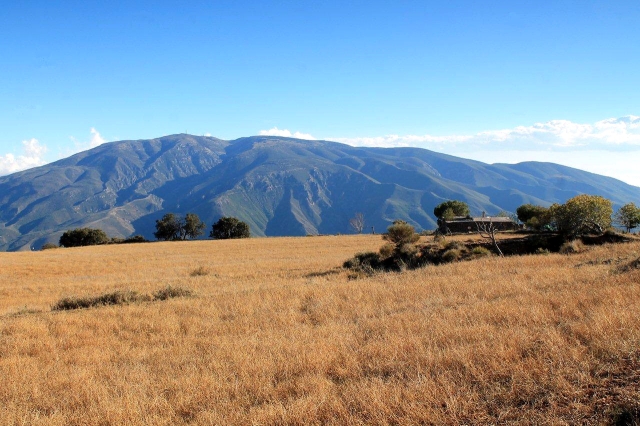 35 Responses to Chasing the Storm