The Great North Road – Carved by Feet and Hooves

I LIVE on an ancient highway. It’s called the Great North Road. For many hundreds of years it’s been the main arterial link between the capital cities of two countries – England and Scotland. It is woven into history, folklore and legend. Dick Turpin galloped up it to his death. The Gododdin rode down it to theirs. Bonnie Prince Charlie got part way down, bottled out and turned back. The Leather Boys drove all the way up and all the way down in one day from the Ace Cafe on the North Circular. I consider it a privilege to be able to sit in my front room and watch traffic pass by . . .

Pedants might argue that the historical Great North Road actually lies four miles to the east of my house – in the North Yorkshire village of Barton – and that it is now known as the A167. They might insist that this other road’s claim to fame is well documented by numerous authorities – including Sir Walter Scott, who had Rob Roy pass along its rutted length between Northallerton and Darlington. Not only that, they might argue, but the Scots and English fought one of their many battles on the same stretch of road – the Battle of the Standard – a bleak memorial now marking the spot. Who won? Google it. I’ve a foot in both camps.

But the Great North Road split at Boroughbridge, above York, the easterly branch taking the direct route to Northallerton, Darlington, Durham, Newcastle and the Scottish border. The westerly branch followed the Roman road of Dere Street to link up with the trans-Pennine Roman road to Carlisle (now the A66) at Scotch Corner, before veering back through Barton to rejoin the easterly route on the outskirts of Darlington.

When the roads were numbered during the 1920s, it was the westerly loop that became the A1 – the primary link between the ancient capitals of Londinium and Din Eidyn. Northallerton and Rob Roy might have enjoyed the droving, coaching, battle-weary version of the Great North Road, but Scotch Corner and my front door ended up on the motorised Roman version. I’m quite happy with that.

The stump of St Cuthbert’s Cross on the old A1 Great North Road in Barton, North Yorkshire

Why am I writing this? Because it’s my day off and the mist is low on the hills – that’s one reason. Another reason is that this historic road that we now take for granted was carved by feet, hooves and wagon wheels. It was imprinted on the landscape by people like us – people who moved about using their own muscles. The Great North Road was one of the first and most spectacular public rights of way. And it still is.

Not too long ago, the Great North Road was a gaping gash of mud that stretched from London’s Smithfield to Edinburgh. During wet weather, that gash became hundreds of yards in width as feet, hooves and wheels sought firmer ground away from the ruts, puddles and sprawling mire. Pilgrims, soldiers, peasants, vagabonds, rebellious armies, drovers, geese, cattle, coaches, kings and clerics – in a nutshell, humanity and its larder – passed along its length. The Great North Road wasn’t planned – it evolved. It wriggled, it shrank, it expanded, it changed its route – sometimes by design and occasionally by accident. Then someone invented tar macadam (can’t remember what his name was) and all that changed.

So I sit in my front room with a branch of the Great North Road literally within shouting distance, wondering whether or not to pull on my boots and get out there. I’ll tell you what else I can see through the window – the stub of St Cuthbert’s Cross, at the side of the road next to the bus stop. The story of St Cuthbert’s posthumous wanderings are well known, but for anyone not familiar, here’s a very brief precis.

St Cubby (local nickname) was buried in the monastery on the holy island of Lindisfarne. In 875 the Vikings invaded and the monks fled, taking with them Cubby’s casket. The monks wandered for many years bearing the saint’s remains, finally interring them in what is now Durham Cathedral. But at every place the bones rested, a cross was raised. The stump of Barton’s cross is still there. So my branch of the Great North Road has been a highway since Viking times at least. I like the thought of that.

Half a mile to the west lies what could be described as the New Great North Road – the A1M motorway. This has little to endear itself to lovers of wilderness and solitude, with the exception of the rather pertinent fact that it is a very convenient route to Scotland. And another half mile west lies the Roman road of Dere Street.

The A1M Great North Road, driven through North Yorkshire and County Durham in 1966

Aha . . . another north-south arterial link carved by feet, hooves and wagon wheels, this one running from York to Edinburgh. Dere Street is the continuation of the Roman road called Ermine Street, which runs from London to York. Perhaps, together, Dere Street and Ermine Street were the original Great North Road. Now, though, it’s just a straight stretch of asphalt that strikes between fields to Piercebridge, a delightful village on the banks of the Tees which is built on the shell of a Roman fort.

So I pull on my boots, dodge a bus on the Great North Road, climb over a stile, and within ten minutes am gazing down upon traffic hurtling along a four-lane version of an ancient highway. And I think about those guys down there in their 38-tonne wagons, white vans and tiny cars. And I wonder how many spare a thought for the millions of people who have made the same journey, many of them on foot or horseback, pulling their cloaks about them as daylight fades and rain streams in from the Pennines.

Another ten minutes later, after following a pleasant grassy track through fields of green stuff that I don’t know the name of (but which looks like brassica seedlings so might well be oil seed rape), I reach Dere Street – now incorporated into the British roads system as the B6275. Dere Street is an Anglo-Saxon name. The Romans would have know it as an “iter”, with a number attached: such as Iter III or Iter VI. I think the Anglo-Saxons win on this one. They certainly beat the 1920s civil service offering of B6275.

Again the trucks, vans and cars whizz past me. Again I wonder if any of their drivers spare a thought for the foreign soldiers who carved this road in an almost perfect line from Scotch Corner to Piercebridge then on through County Durham and into Northumberland, throwing magnificent bridges across the Tees, Wear, Tyne and any number of smaller rivers so the legions could march into the land of the Picts, give them a hammering then get hammered themselves. 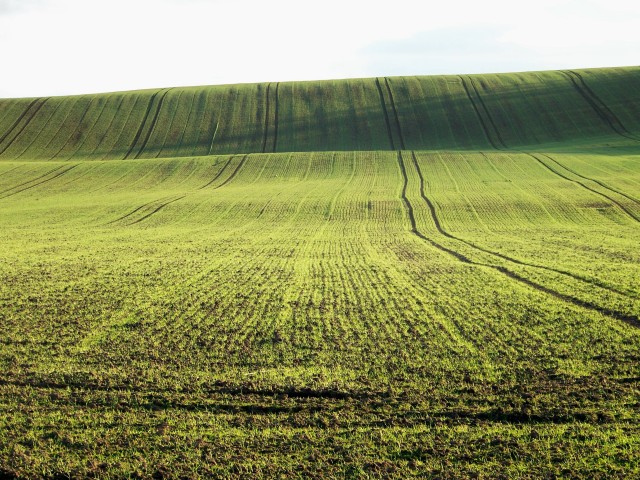 The Roman road of Dere Street, which runs from York to Scotland

I wander the mile back to Barton, conscious of the fact I am placing my boots in the footsteps of soldiers from Africa, the Middle East, Spain, Gaul and many other countries – sent to this insignificant place by bureaucrats in distant Rome. I cross my own personal section of the Great North Road, along which horse-drawn coaches once hurtled from Scotch Corner to Darlington, give Cubby’s stump a friendly nod, wish the Vikings good health just to be on the safe side, open my front door, pour myself a beer and get pleasantly drunk.

Does anyone else contemplate stuff like this? Or do we all live in the present, passively accepting that our roads were made by blokes in fluorescent jackets who pop back occasionally, disrupt the traffic with their temporary lights, lay some more asphalt, then bugger off to upset someone else?

Is there such a thing as the past or is there only the present? Does it matter or does it not? Am I a better person for thinking about these things than the bloke in green overalls driving the Eddie Stobart lorry who thunders past me with his mind on Stuart Pearce’s ability to manage the England team? Dunno.

Ancient highways; the Great North Road; millions of people making millions of journeys across 2,000 years, stamping their feet into mud and stone and stamping an identity on a nation. Sorry, two nations. Does it actually matter? Perhaps I should drink less.