Marching as to War – on Beinn á Ghlo

BEINN Á GHLO is a fine massif. It rises above Glen Garry in a series of stony peaks and ridges that swoop into wild country away to the east. There are three Munros in this majestic group of hills – and when viewed from below they look like they mean business. The first is Carn Liath, which at a steep 976m (3,202ft) is a breathless warm-up for mightier things. Carn Liath is connected by a splendid ridge to Bráigh Coire Chruinn-bhalgain – a bit of a brute at 1,070m (3,510ft). Then on the far side of a bealach, and turning its back to the civilised world, stands Carn nan Gabhar. This is the loftiest of the three Munros and it knows it. Carn nan Gabhar possesses attitude. It looks like a mountain that’s trying to be higher than its 1,1120m (3,674ft). Perhaps one day it might be. You can do anything if you try hard enough . . .

I’m steaming up a path that zigzags up the front of Carn Liath and doing well because I’m in a bad mood, and that always helps. I paid £17.50 to camp at Blair Castle Caravan Park last night – yes, £17.50. That’s for me, my little tent and my little car. No thirty-foot leisure vehicle with electricity hook-up, satellite dish and patio option for a portable barbecue. Just me occupying a piece of grass too small to provide a day’s grazing for a goat.

And the infuriating part of it, the bit that makes me really angry, is that I have reached the conclusion – rightly or wrongly – that a portion of that £17.50 is being squirreled away to finance a private army. 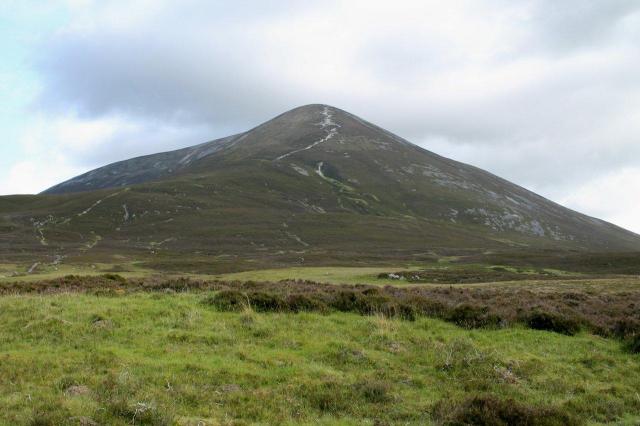 That’s the path up Carn Liath. You can’t miss it

Did you get that? Private army. Apparently, the Duke of Atholl, whose ancestral home is Blair Castle, is the only person in Europe to possess a private army. That’s really amazing. Because private armies are something we tend to associate with parts of the world where democracy and table manners haven’t penetrated. We British don’t usually go in for private armies – unless you’re an old Etonian or the disgraced son of a former prime minister. Then it’s almost mandatory.

The duke’s private army, the Atholl Highlanders, has its origins in the 77th Regiment of Foot, which was raised as a relief for regiments serving during the American War of Independence, though it got no farther than Ireland. Nowadays it just turns out on ceremonial occasions – a bit of drumming and piping for the tourists and a bit of marching to air the kilts. Everybody likes that sort of thing and I’m no exception. It boosts the local economy and everyone has a memorable experience.

So I’m huffing up Carn Liath thinking: I could do that. I could raise a private army and boost the economy of the Tees Valley (which used to be called Teesside before the corporate marketing and regenerating types moved in). It would be a multi-cultural regiment to reflect the population’s ethnic diversity, and it would boost tourism by marching from Darlington to Redcar twice a year while playing an assortment of musical instruments and singing the praises of various gods.

One of the famous tufted cairns of Beinn á Ghlo

My first step would be to apply for a National Lottery grant to purchase a batch of second-hand uniforms and obsolete weaponry from a sub-Saharan nation, just to give my multicultural private army that important veneer of authenticity. Would my application be successful? Or would my front door get kicked in early one morning by counter-terrorism officers from the Metropolitan Police? I think we know the answer to that one.

Private armies are accepted by the establishment when they are owned by stupendously rich people, Bond villains and the clowns at G4S. The last word on this subject, for now, goes to Wikipedia, which states that the Duke of Atholl’s private army is inspected by its patron once a year “when the present duke comes from his home in South Africa”. Why does that line crack me up?

That tirade’s got me to the top of Carn Liath. A good dose of blinkered working-class prejudice doesn’t half get the heart thumping and the legs churning. And the fact that I’m £17.50 lighter has undoubtedly helped, as well. 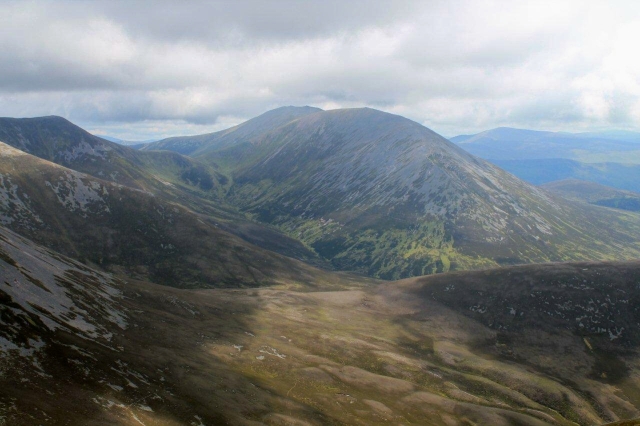 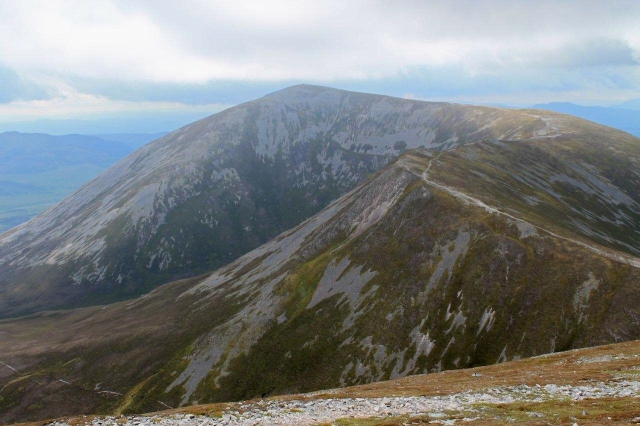 Looking back along the ridge to Carn Liath

A tremendous ridge curves north from Carn Liath to Bráigh Coire Chruinn-bhalgain. It’s a ridge where a bloke can march with the wind in his hair and whistle the Braes O’ Killiekrankie, while periodically gazing dizzily down slopes of scree onto wild moorlands many hundreds of feet below. A steep and stony pull gets me to the summit of Bráigh Coire Chruinn-bhalgain, then I drop down a deep dip to a bealach and sail up another shoulder to the summit ridge of Carn nan Gabhar. This is real meaty stuff.

The Atholl Highlanders, by the way, and from what I can gather, have never fired a shot in anger. This raises a question mark over their effectiveness as a private army. But they would almost certainly knock spots off Olympic guardians G4S, the dozy pillocks. Send the Highlanders down to London with an extra ration of oats, that’s what I say.

And they could probably teach me a valuable lesson in getting down off Carn nan Gabhar, because this is where I come unstuck. The easy route, let me tell you in hindsight, is to retrace the path to the bealach and follow a good track south-south-east along the banks of the Allt Bealach an Fhioda to guaranteed salvation. Instead, I continue along the ridge to Airgiod Beinn (1,061m, 3,480ft) and drop off the end – almost literally.

Looking down from Carn nan Gabhar, with Airgiod Beinn to the left, Bráigh Coire Chruinn-bhalgain to the right, and Carn Liath tucked in the middle

Anyone with dodgy knees should avoid this route. From just beyond its summit cairn, Airgiod Beinn plummets to the heathland around its feet at the angle of a steep church roof. I am tempted to cling to the heather halfway down and have a late lunch, but I know that if I drop my boiled egg I’ll never see it again. 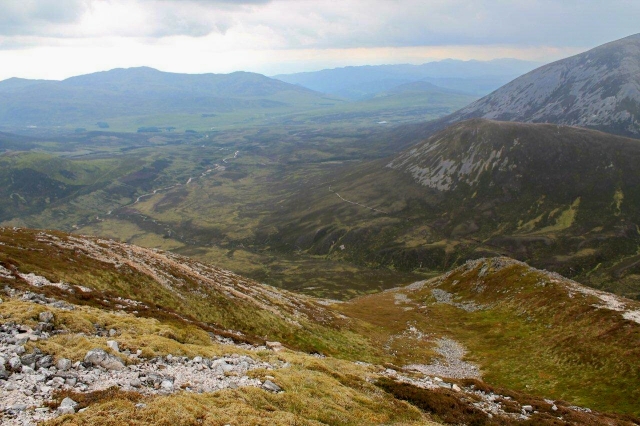 A couple of thousand feet lower, where Airgiod Beinn begins to level out, I intercept the Allt Bealach an Fhioda track and follow its course across several miles of heathery heath to join the farm road back to Monzie, where I’ve left the car. 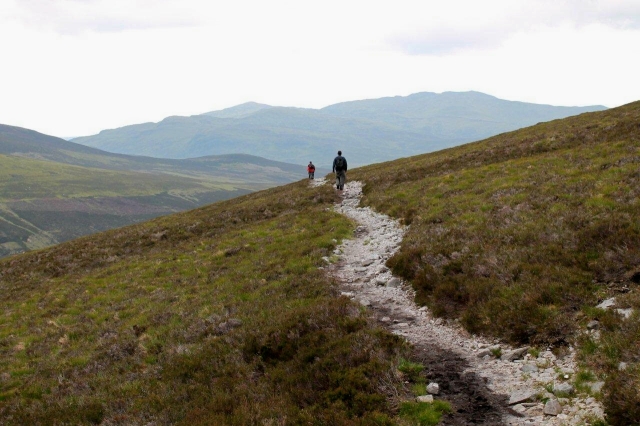 One final observation. The approach to Beinn á Ghlo (which means hill of the veil of mists) is through high pastureland where cattle and sheep roam free. There are scatterings of woodland and peaceful lochans, and the remains of settlements dating back to prehistoric times. It really is the most pleasant of landscapes to wander through in the afternoon sun with the dust of the mountains and peat of the moors on your boots. This is the sort of place I’d like to live but can only dream about. Unless . . .

I wonder if the old duke’s holding any recruitment drives? I used to be pretty handy with an air rifle.

For a high-res peek at the peaks, click on an image: 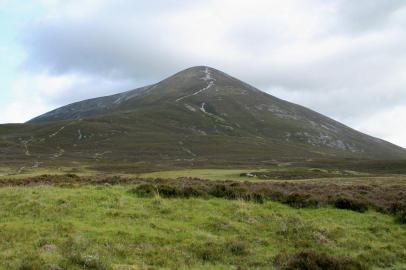 That’s the path up Carn Liath. You can’t miss it

One of the famous tufted cairns of Beinn á Ghlo 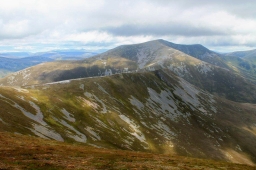 Looking back along the ridge to Carn Liath

Looking down from Carn nan Gabhar, with Airgiod Beinn to the left, Bráigh Coire Chruinn-bhalgain to the right, and Carn Liath tucked in the middle 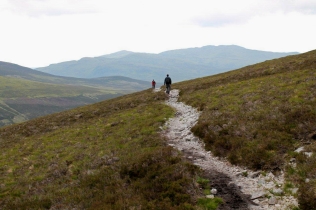 26 Responses to Marching as to War – on Beinn á Ghlo