Going to California . . . Via Teesdale 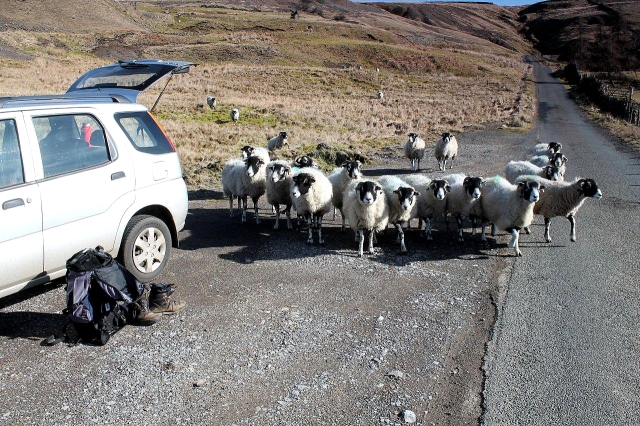 HISTORY has not been kind to the Pennine valley of Hudes Hope. On a sunny morning in March its lesser scars can be mistaken for natural wounds and warts on the landscape. But there is no disguising the greater disfigurements ??? the 19th Century lead-mining hushes that slice down the fellsides like colossal gutters, and the dull heaps of spoil piled randomly on the slopes. Hudes Hope has been gashed open by the hands of man, its moors hollowed out and the innards raked to the surface. But where man has unsympathetically exploited the environment, nature has partially recolonised and healed. Despite its bleak history and the despoliation, Hudes Hope remains a wonderfully peaceful place to sit in the sun and drink tea . . .

The sheep think so too. They stream off the fell when I sit down on my collapsible stool and flock around the car, baa-ing loudly. It must be the aroma of the tea. I expect it’s in short supply up here.

Today I’m going to California. I tell this to the sheep and they look puzzled ??? but sheep always look puzzled. California was a lead mine a few miles to the north-east of Hudes Hope. The name intrigues me because I grew up in a part of Cumbria where there was also a California pit. That was a haematite mine just up the coast from Barrow. All that remains today is a couple of ponds where fisherman sit stoically and watch ducks.

This new California ??? new to me ??? was more formally known as Little Eggleshope Lead Mine. But it’s much easier to say “California”, and it’s far more romantic and aesthetically pleasing to do so.

Hudes Hope, this empty valley with a couple of bleak farms and patches of bare field, situated immediately north of the Durham town of Middleton-in-Teesdale, is my starting point. I head north-east up a slope through the old workings of Lodgesike Mine to the crown of the moor, then follow a rugged path down a deep series of gashes ??? Manorgill Hushes ??? to a sunlit valley known as Great Eggles Hope.

The sun is hot and the sky is blue, but patches of snow still lie in sheltered hollows. The calls of moorland birds ring through the warm air; grouse cluck in the heather; rabbits scatter among the ruins of the Victorian-era lead mining industry. Great Eggles Hope may well have been a grimy, poisonous and desperate place to work in years gone by, but today it is the most pleasant place on earth.

I pass an old mine portal, where water streams from deep in the earth. Massive heaps of spoil fill the valley floor. These are the waste tips of the Wiregill and Monorgill lead mines. These operations were colossal, employing hundreds of men from the 1850s until the early decades of the 20th Century.

Thousands of tons of galena ??? the ore of lead ??? and its associated minerals have been hacked from the slopes of these moors and from beneath the floor of this valley. Yet to walk along Great Eggles Hope today, listening to the birds calling and smelling the warmth of spring, it is impossible to imagine the conditions that prevailed when the industry was at its peak.

I follow a mine track north up Wire Gill and climb onto the southern flank of Harnisha Hill, where pillars of smoke rise into the sky as estate workers burn heather to encourage new growth for the grouse to eat.

There’s a Victorian reservoir on the flat top of the moor, fed by an overgrown launder (leet, lade, flume, race) delivering water from Harnisha Hill. And below the reservoir I spy the spoil heaps of the California mine stretching east along the heathery slopes of Little Eggles Hope. 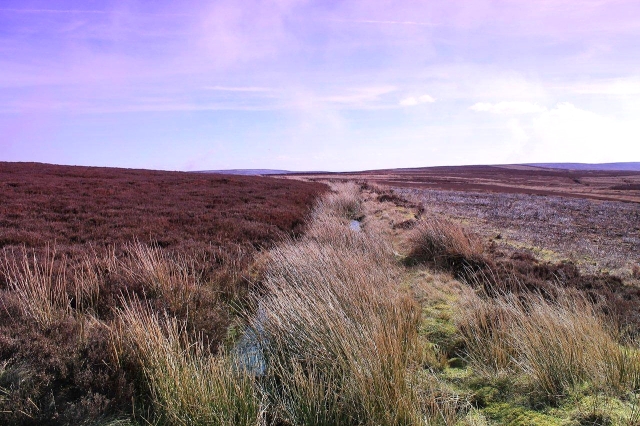 California, it must be said, is a bit of an anti-climax. There has been an attempt at landscaping some of the lower spoil heaps ??? but landscaping seldom works in an environment such as this. Victorian remains, which have been absorbed into their surroundings, are replaced by patches of bulldozed ground that resemble those bland depots where councils store chippings and rusty snow-ploughs.

I sit on the flattened rubble to eat my lunch as smoke drifts along the valley from the heather fires, turning the air and the landscape a watery blue. I might easily be sitting in a local authority tip while scavengers burn gash cables to retrieve the copper. But I???m miles from anywhere in a remote Pennine valley at a place whose name evokes images of blue skies, fruit glades and Route 66. 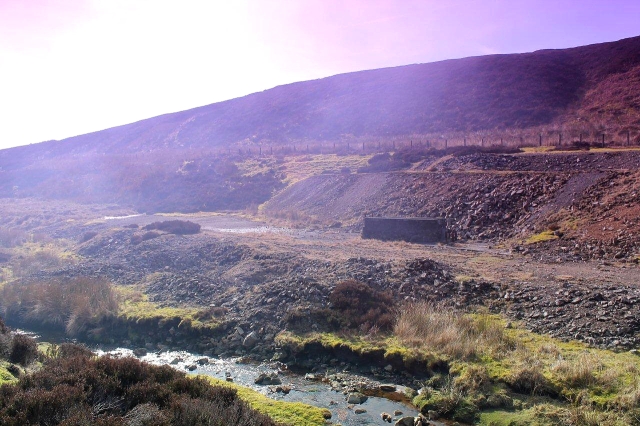 So why is it called California? What possessed intelligent men to name this place after a hot and exotic region of North America that was, in the mid-19th Century, famous mostly for its enormously lucrative gold mines?

Was it the irony of the Durham miners who trudged through mud, wind, rain and snow to spend their working lives in danger and darkness; or the cunning of mine owners seeking to drive up share prices by introducing a dash of gold-rush glamour ??? as a bingo-hall owner in Whitley Bay might promote his establishment by advertising it as the Las Vegas of the North-East riviera?

Either way, there are other examples. The remains of several Colorado pits are to be found in Cumbria, and there was a Klondike Quarry at Coniston. There was no gold in any of them, and none was expected, but there were plenty of men desperate to earn a wage, and plenty of owners eager to exploit them and the shareholders as well.

I follow the river around the fell to a whitewashed farm then tramp back up into Great Eggles Hope, poke among the mine buildings for a while, clamber back up Manorgill Hushes and over the top of the moor, then descend in the warm afternoon sun to the head of Hudes Hope. 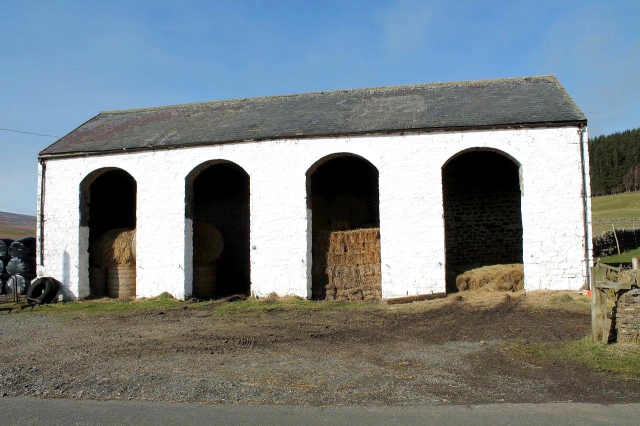 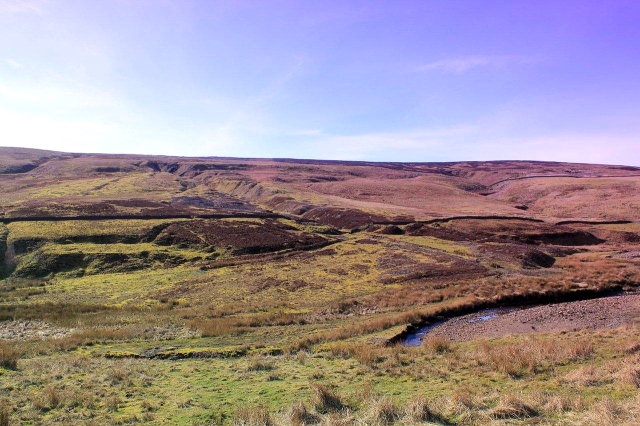 East Rake Hushes above Great Eggles Hope. Hushes were opencast workings that were carved out by torrents of water diverted along the course of the mineral veins ??? hence the reservoirs on the tops of the fells. The exposed ground was then exploited by miners. Then more water was channelled down and more ground exploited

Coldberry Gutter, at Hudes Hope, one of the deepest hushes in the area

This entrance to Lodgesike Mine, at Hudes Hope, has been walled up to protect the curious from themselves

It’s been a satisfying day. It???s been a glorious day. And now, as I sit on my collapsible stool with my back against the car, gazing along the hazy valley towards the roofs of Middleton-in-Teesdale, I pour more tea and wait for the sheep to come streaming off the fell.

But they don???t come. A case of once bitten twice shy, perhaps ??? a bit like me going to California with an aching in my heart and finding things aren???t quite as I expected them to be. Well I won???t be fooled like that again.

So where to next? Glancing at the map I see there are a couple of old colliery villages down the road in Durham called Quebec and Toronto. With names like that, you???ve just got to go and poke around . . .

29 Responses to Going to California . . . Via Teesdale