HOT sun on the back of the legs. Dust inside socks. Warm breeze drifting from the Irish Sea and stirring dry grasses. The magnificence of Pillar rising from the green of Mosedale into a flawless sky. Days like this were made for climbing mountains . . .

Pillar is the eighth-highest mountain in the English Lake District and one of the most rewarding to climb. At 892m (2,927ft) it forms a wall of volcanic rock separating the head of Mosedale – an extension of Wasdale – from the southern flank of Ennerdale. The most invigorating route to the summit zigzags up the side of its most famous feature, the vast buttress which gives its name to the mountain – the Pillar Rock. And that’s the route I’m taking today.

I once broke my arm on Pillar. Stupid thing, really. I was running down a scree chute from Wind Gap into Mosedale and couldn’t stop. Hit a boulder, cart-wheeled over it, and landed on my arm in a stream. Luckily, I was wearing a Barrow AFC scarf and my mates rigged it into a sling – after they’d stopped laughing. Bloody hurt, mind. And the scarf was ruined.

This is three years later and I’ve learnt my lesson. No charging down scree chutes today. Instead, I face a steady and sweaty plod up a winding path to the crown of Black Sail Pass, then an airy tramp across Looking Stead ridge to a junction where the narrow track to Pillar Rock – the High Level Route – veers off the main path to the summit. It’s hot work. Don’t need a scarf in this heat.

Taking a breather on the High Level Route, with Ennerdale and High Stile in the background

Robinson’s Cairn, which was built to celebrate the life of mountaineer and local farmer John Wilson Robinson, who died in 1907 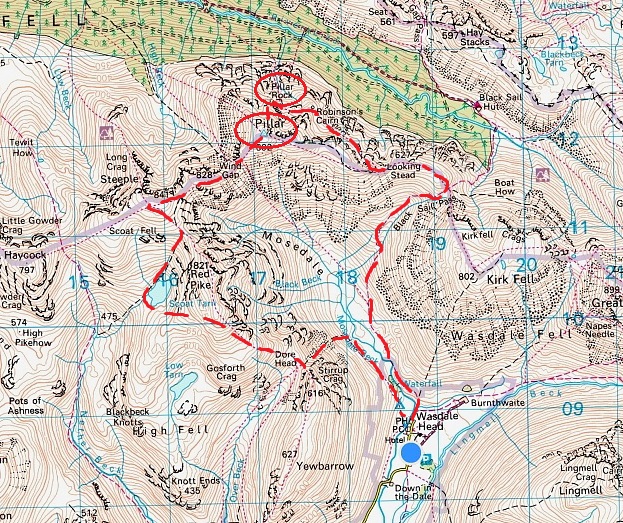 If anyone’s interested, John Travolta and Olivia Newton-John are at Number One with You’re the One that I Want. Can’t stand it myself, but Olivia’s rather cute. Boney M’s at Number Two with Rivers of Babylon/Brown Girl in the Ring. At Number Three it’s Father Abraham and the Smurfs with the Smurf Song. It’s a relief to get away from all this tripe. I think I’d break my other arm and spend another wasted evening in North Lonsdale Hospital rather than switch on the radio and listen to that lot.

This is my first ascent of Pillar by the High Level Route. The route traverses Green Cove and Hind Cove to Robinson’s Cairn, and then crosses Pillar Cove to ascend the curiously-named Shamrock Traverse to the top of Pillar Rock. It’s a great path with spectacular views from rocky ledges down into the valley.

The path to the top of Pillar Rock follows the rib of bare stone rising to the left in the bottom-left corner of the picture, then reappears on the sunlit ledge rising diagonally in the top left. This is called the Shamrock Traverse

Once on the top of Pillar Rock I sit in the sun and listen to flies buzzing. Let’s tarry here and gaze into the heat haze, and allow Lakeland’s greatest poet, William Wordsworth, to illustrate the dangers of Pillar Rock in this short excerpt from his poem The Brothers:

PRIEST. One sweet May-morning,
(It will be twelve years since when Spring returns)
He had gone forth among the new-dropped lambs,
With two or three companions, whom their course
Of occupation led from height to height
Under a cloudless sun–till he, at length,
Through weariness, or, haply, to indulge
The humour of the moment, lagged behind.
You see yon precipice;–it wears the shape
Of a vast building made of many crags;
And in the midst is one particular rock
That rises like a column from the vale,
Whence by our shepherds it is called, THE PILLAR.
Upon its aery summit crowned with heath,
The loiterer, not unnoticed by his comrades,
Lay stretched at ease; but, passing by the place
On their return, they found that he was gone.
No ill was feared; till one of them by chance
Entering, when evening was far spent, the house
Which at that time was James’s home, there learned
That nobody had seen him all that day:
The morning came, and still he was unheard of:
The neighbours were alarmed, and to the brook
Some hastened; some ran to the lake: ere noon
They found him at the foot of that same rock
Dead, and with mangled limbs. The third day after
I buried him, poor Youth, and there he lies!

The moral is: don’t fall asleep on Pillar Rock, or fall you might. Instead, gaze along the deep defile of Ennerdale towards the coast, and across the crags to bare northern fells, and let your soul drift on uplifting breezes. Because this is a place to sit and reflect.

The summit of Pillar is but a short, gravelly step above the Rock. From the summit I drop down through broken stones and shingle to Wind Gap – which, as the name suggests, is a draughty defile between crags. The next summit is Scoat Fell (802m, 2,631ft), a pleasant peak which has the added attraction of a crystal-clear tarn on its southern flank. It’s a hot day – a baking hot day – so off come the dusty old clothes and in I go. Scoat Tarn is a perfect place for a dip.

From here I wander refreshed to Door Head, where a dilemma awaits. Do I continue my walk over Yewbarrow and face a weary slog along hot roads back to my tent in the paddock at Wasdale Head? Or do I risk the precipitous Doorhead Screes and the prospect of another broken arm – but hopefully a quick return and an early pint in the Wasdale Head Inn? First, let’s take some pictures. 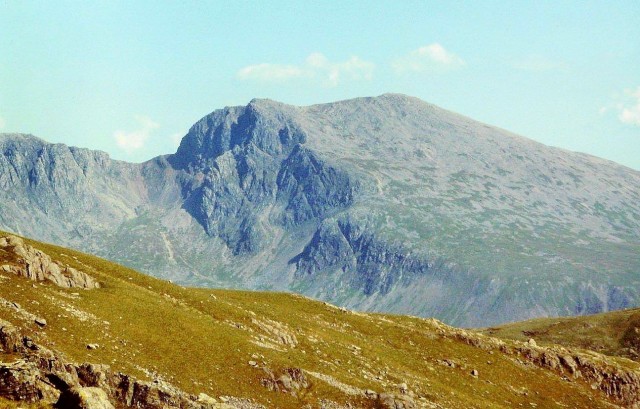 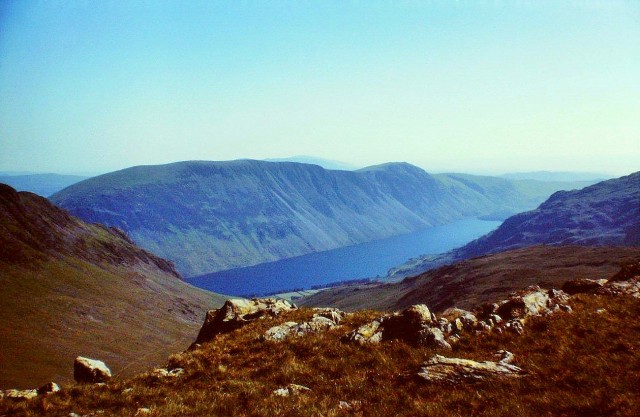 Finally, it’s decision time. Down the screes I go – but this time at a slower pace and without the cartwheels. It’s amazing what a bloke will do for a cool beer on a hot day.

Stirrup Crag and Doorhead Screes (the pale, narrow line to the right). As quick descents go, it’s the next best thing to shouting Geronimo and jumping off

Passing over Pillar, one fine day in June 1978

35 Responses to Days Like This, No 19: Pillar and the Rock