Among Mules, Mountains and the People of the Sierra 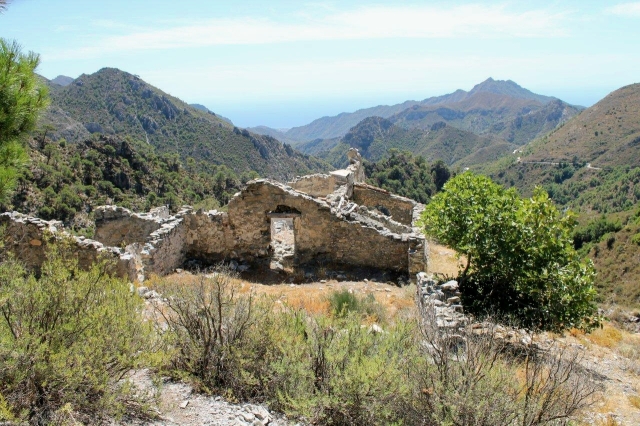 THE Spanish Civil War ended when General Francisco Franco’s iron grip squeezed the last drops of hope from the country in April 1939 . . . didn’t it? Or did the bloodshed continue into the 1940s and 1950s in the wild and rocky mountains of Andalucia?

That’s an intriguing question, and to unearth an answer I need to pull on my boots, head for the high sierras and poke about in some recent and extremely raw history . . .

This is a ramble that follows two paths into the past. The first is a challenging climb up a mountain pass that was a major mule trail until the 1950s; the second is a journey through an intriguing book called Between Two Fires, by David Baird. The book documents a guerrilla war that was launched in Spain just before the Allies set a limit on how many fascist dictators they were prepared to remove.

Hitler had to go – that was assured. Mussolini got his comeuppance at the hands of his own people. And Franco? Well, Franco was sort of neutral during the entire conflict – despite sending troops to fight the Soviets on the eastern front. And it was this neutrality of convenience that allowed him to remain Europe’s sole fascist dictator until the nasty piece of work died in November 1975. Not that I have an opinion.

Which brings us to a little-known chapter of history that begins shortly after the Allied victory at El Alamein.

In 1943, Spanish communists freed from Vichy concentration camps in north Africa and then trained in guerrilla warfare by the US, landed in secret on the Spanish coast and melted into the mountains. They called themselves the Maquis, after the rural guerrilla bands of the French resistance. But to the peasants of Andalucia they were known as la gente de la sierra – the people of the mountains.

Backed by the Russians, they fought a long and desperate campaign against the government, waiting for the day when Hitler was toppled and the Allies marched over the Pyrenees to oust a weakened Franco. Unfortunately, the Allies changed their minds. The Maquis fought on.

Frigiliana sits on the edge of the sierra, above Nerja and the sea

My walk begins above the white walls of Frigiliana, a village that wallowed in an almost mediaeval depth of poverty until the tourist industry brought sudden prosperity. Frigiliana suffered tragically during the Civil War and the guerrilla conflict that followed. Sit today on its restaurant terraces drinking Alhambra beer and sipping gazpacho and it’s hard to believe that things were ever different. But they were.

Franco’s quasi-military police, the Civil Guard, don’t dump the bodies of their victims in the cemetery any more, thank god, or drag people from their beds in the middle of the night to give them a good kicking. The timeshare industry wouldn’t like that sort of thing. And Christie Moore would never have written the lyric:

Some jet off to Frigiliana
But I always go to Lisdoonvana 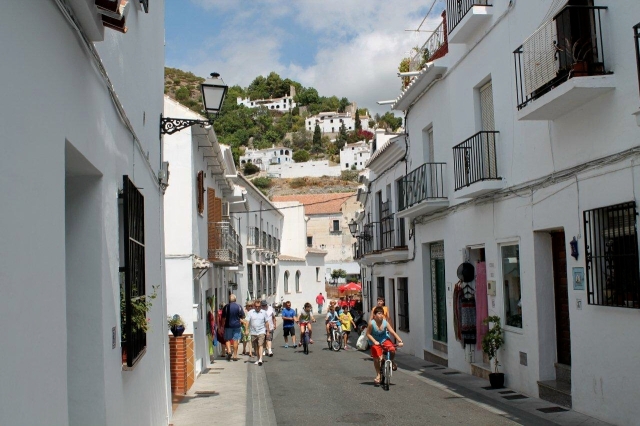 The sun is rising as I drive through the village. I pull up suddenly because in the middle of the road is a man with a mule. This sets me up no end because here is a man with a working mule, and I’m off into the sierras to walk an ancient mule route. I give him an involuntary wave, the automatic gesture of recognition that singles out kindred spirits passing in the mountains. He plods by with complete indifference.

Getting back to the nitty-gritty of the walk, let me introduce you to guidebook writer Charles Davis. Some of you may be familiar with his work, but his book, Walk the Axarquia, is a first for me. Davis’ route descriptions are extremely detailed and he possesses an entertaining sense of humour. I’m following his route to Puerto de Frigiliana, a high pass in the Sierra Almijara over which mule trains picked their way taking fish and goods from Nerja (another impoverished village that’s now a major tourist destination) to the city of Granada. Trade was brisk for many hundreds of years but went into steep decline in the 1950s when the road network was improved.

But before I pull on my boots in the abandoned marble quarry where Davis advises me to leave the car, I’ll let you in on the real reason I’m undertaking this walk.

On a grassy ledge high in the mountains, just before the final pull over the pass on the crest of the Sierra Almijara, sits the ruin of what we British might call a tavern, a wayside inn, a hostel for the hardy folk who passed this way on their journeys to the villages and towns of the Spanish interior; the muleteers, the goatherds, the wayfarers, the trading folk who might seek a bed for the night, a plate of beans or just a swift drink.

It was known as the Venta Panaderos – and in its final gasp of activity before the route faded into history, it was a haunt of the Maquis and the Civil Guard who hunted them down. The venta is pictured on the cover of Baird’s Between Two Fires (see below), and I have an inexplicable yearning to sit in the ruins, gaze out upon rocky peaks and soak up the atmosphere. 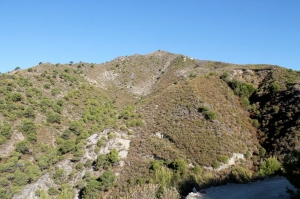 I set off in my clumping boots along dirt roads that slumber in the early-morning shade, and after a couple of miles of twists and turns pause to photograph Cerro Verde, pictured right, a hill where a particularly ferocious battle took place during the guerrilla war, with the rebels positioned on the summit and the government forces in the scrubland below. I labour up a dry stream bed then follow more dirt roads to where the land suddenly drops away to my right, revealing a panorama of mountain scenery.

This is spectacular stuff. The Sierra Almijara and Sierra Tejeda – known collectively as Sierra Tejeda y Almijara – are the immediate neighbours of the Sierra Nevada, the highest mountains in western Europe outside the Alps. They look like mountains should: steep rocky pyramids scarred by deep ravines and surrounded by pine forests. They are not particularly beautiful mountains. But they are wild and impressive. 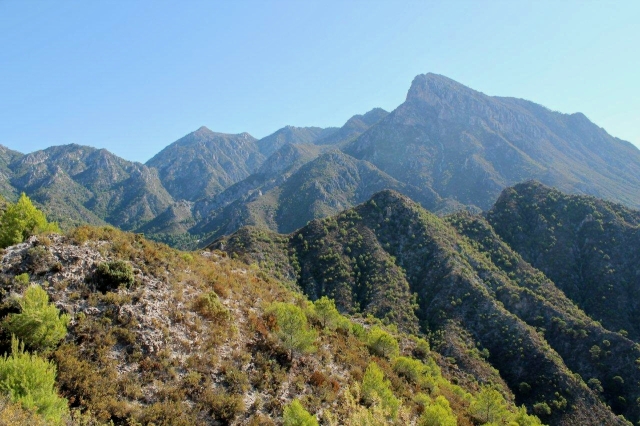 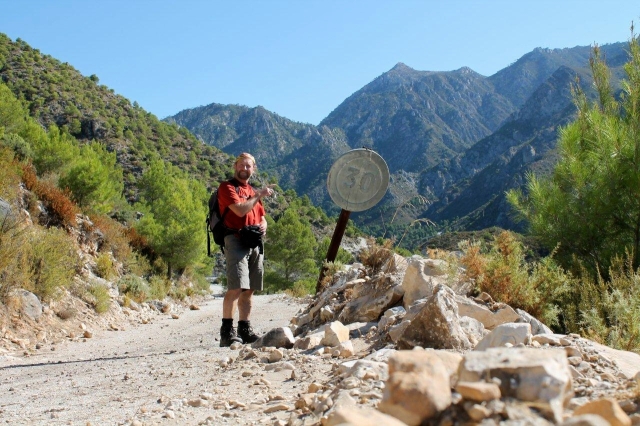 I pass the ruin of the Venta Camila, pictured above, another abandoned wayside inn, and from here I can just make out the ruins of the Venta Panaderos perched high on its shelf (below, right in the centre of both pictures). According to Davis, the dirt road leading to the pass skirts several hundred feet beneath the ruin, the original track to its terraces now overgrown with brush and a prickly shrub resembling gorse. 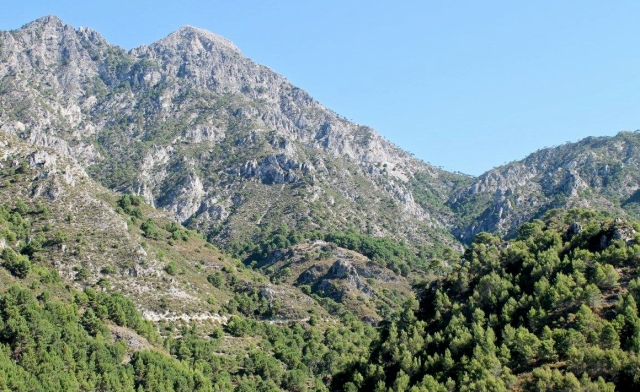 Unable to locate the old route in the undergrowth, and not feeling inclined to scramble up scree and crumbly crags in the baking sun, I resolve to make directly for the Puerto de Frigiliana, following a path that zigzags up the steep mountainside and passes through gullies hewn from the rock just wide enough for mules to pass. 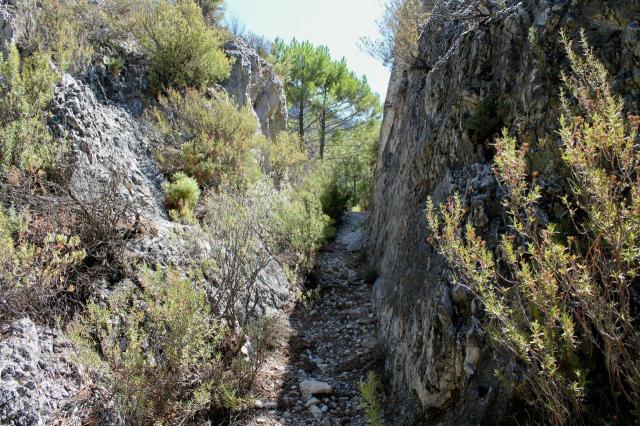 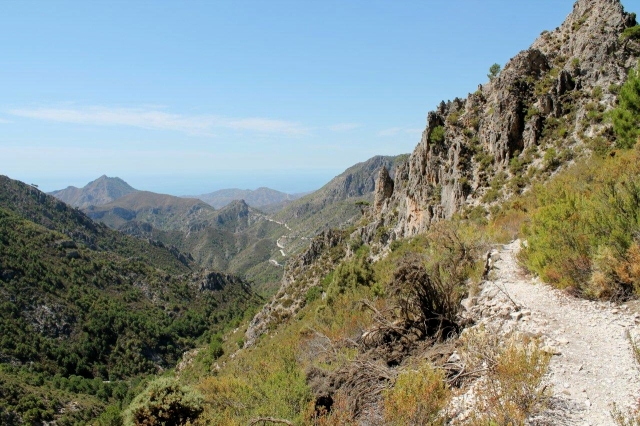 The crest of the pass – the actual gap where the Puerto de Frigiliana (pictured below) opens into the hinterland – is a bit of an anti-climax. My thin and winding mule trail is swallowed by a dirt road that snakes up from the woodland of the northern slopes. There is no romance in roads that a four-by-four can quite easily negotiate. So I turn about to make my way home.

But my journey is not over. Blundering through the brush down the steep zigzag path, I stumble upon the abandoned track to the Venta Panaderos, and within minutes I’m sitting beneath its ruined walls eating fresh bread, chorizo and goats cheese on sunny terraces that look out over silent forests and the distant haze of the Mediterranean.

Baird says this of the venta:

To la gente de la sierra, the Venta de los Panaderos must have seemed like a mirage, that solitary building lost amid precipitous terrain where a traveller could enjoy all the luxuries he dreamed about, food, warmth, drink, soft beds. The inn has entered into the mythology of the sierras. 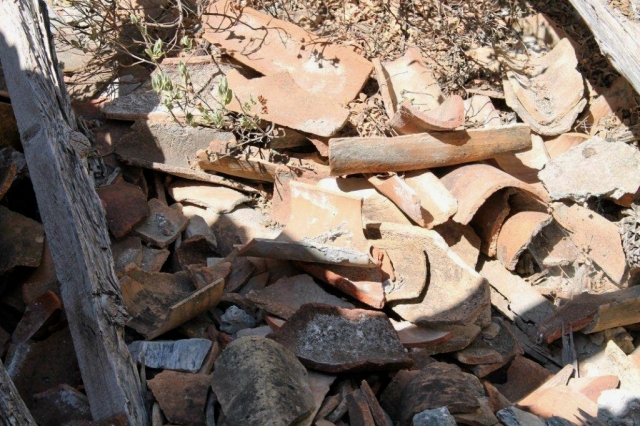 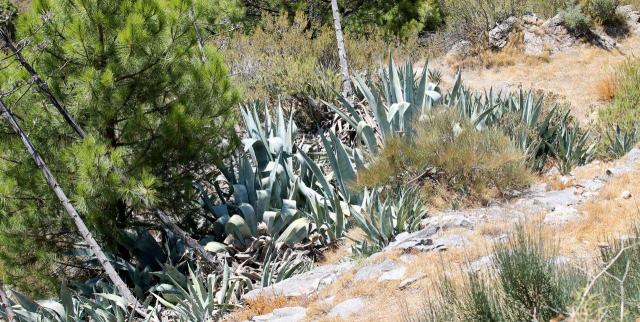 A few decades ago, men with guns and grenades sat in this same place, waging their guerrilla war against the Franco regime. According to Baird, the proprietors of the venta, Paco Manuela and his wife Ana Herrero, were republican sympathisers, and one of their daughters, Dolores, was said to be the lover of the local rebel band leader, Roberto. It could be the stuff of a Hemingway novel. Except it’s real. It’s ordinary people caught up in a tragic struggle. Roberto was captured by the authorities and executed in Granada in 1953.

Time moves on, memories fade and paths get lost in the undergrowth. Now the Venta Panaderos is nothing more than a few roofless walls and heaps of red tiles among a scattering of pines, fig trees, scrub and cacti in the very back of beyond. It’s history.

I’ll tell you something else. If ever there was a place, a silent, secret, almost spiritual place to spend a night in the mountains and watch the stars appear one by one and circle above your head, then this is it. What would I give to sit here while the shadows lengthen and an indigo haze settles on the distant sea, alone in the ruins and gazing out above the world?

Sometime in the future, perhaps, when an opportunity arises, I’ll return to spend a night among the stones. But today I’ve got to pick my way through the mountains and follow several miles of dusty tracks back to Frigiliana, leaving the Venta Panaderos to the ghosts, the breeze, and the stars that shine down.

IT’S 1am on Wednesday, September 19, 2012, and I’m just about to upload this post. I was trawling through news websites earlier this evening and came upon the obituary of a Spanish Civil War veteran who has died at the age of 97. His name was Santiago Carrillo. He fled to France after Franco’s victory and became the leader of the Spanish Communist Party in exile, returning to Madrid in 1975 on Franco’s death. In the 1940s, Carrillo was involved in organising the secret invasion of Andalucia by guerrilla forces and would have taken part himself if he had not been ordered to France instead. He was one of the key movers behind the events in this article . . . History isn’t always in the past. History is an endless road and we’re all shuffling along it at different speeds.

CLICK ON THESE FOR HIGH-RES VERSIONS OF THE ABOVE:

Frigiliana sits on the edge of the sierra, above Nerja and the sea 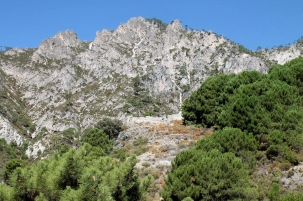 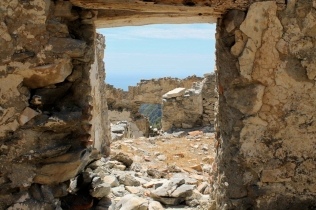 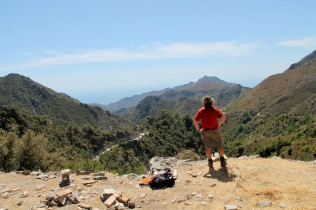 21 Responses to Among Mules, Mountains and the People of the Sierra