Scaud Hill and Beyond ??? At My Leisure

ONCE we’re under way with this post and built up some momentum I’m going to tell you about Mr Ramsey. That’s Gordon Arthur Ramsey. Not the chef with the bad attitude. Another bloke. Anyway, the air feels like spring this morning. I???ve parked the car at the side of the B6277 near the head of Teesdale, County Durham, next to the mouth of an old lead mine at Ashgill Head. I like it up here. There???s a sense of openness and wildness. This is beautiful country but little frequented. There are a few whitewashed farms, almost as many Methodist chapels, and lots of ruined buildings ??? an indication that the population was once far greater than it is today. Life has passed through Teesdale in magnificent cycles, the same as it does in most places. Only we don???t always notice things spinning . . .

I head straight up the fell like a man who knows where he???s going, but I don???t because I haven???t much of a plan except to stand on the top of Scaud Hill, gaze over wild ground into neighbouring Weardale, and decide where to venture next. I pass some ruined farm buildings and follow old tracks that are long overgrown.

There is much evidence of 19th Century lead mining activity on the higher slopes of the moor. Some vertical shafts are still open and have been fenced off to prevent the unwary plunging to their doom. Scaud Hill should not be tramped across after dark. If you ever find yourself up here in bad visibility and you are in need of a pee, don???t leap over a fence for Christ???s sake.

The main adit level at Ashgill Head Mine, right by the side of the main road

One of the old mine buildings, now used as a storehouse by a local farmer 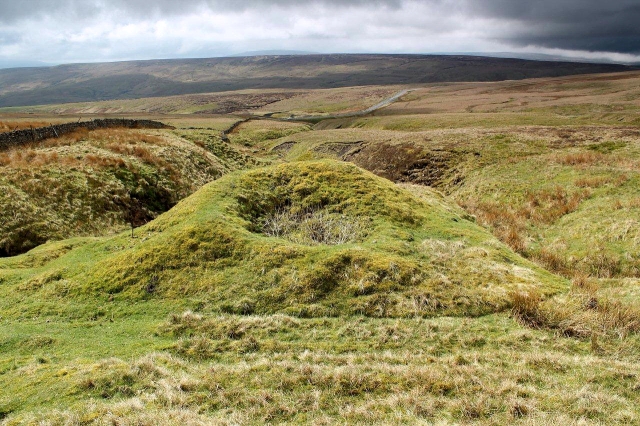 I lobbed a stone down this shaft and counted to twenty but didn’t hear it hit the bottom. It might still be falling

And here’s another. Dangerous places these. Fall into them and you’ll never get out

This might look like a harmless heap of stones but there is a reason it’s fenced off. This is what’s known as a bee-hive cap over a shaft. Sometimes, rather than just abandon old workings, the miners built a cairn over the top of a shaft ??? igloo fashion ??? to preserve the shaft and prevent people and animals falling down it. If you removed some of these rocks you’d be able to peer down a very deep hole. A more likely scenario would be you removing one or two stones and the whole lot ??? along with yourself ??? disappearing in a mighty great whoosh never to be seen again

Let me tell you about Gordon Arthur Ramsey. When I was in the second year at Askam Junior School ??? which was 1965-66 ??? My Ramsey was my teacher. His reputation for being loud, pedantic and authoritarian preceded him. But like many teachers with similar reputations, when you got to know him you realised that this was part of his style. It was a front ??? and the genuine man was a much easier and convivial person.

At first we sat meekly in his class because we were overawed. Then, when he had our trust, he told his jokes, entertained, sowed his jewels of knowledge in his unique though abrasive manner and deftly nudged us onto the right course to being better people. Teachers like MrRamsey shape our lives.

On long afternoons when he was tired of teaching, Mr Ramsey would sit back in his chair and give us the benefit of his knowledge ??? life as Mr Ramsey saw it. He told us the world was changing fast. In the not-too-distant future, he said, we would all have more leisure time because machines would do all the work. We wouldn’t need employment. We could expect lives of leisure. I particularly remember him using that word. “Leisure”. 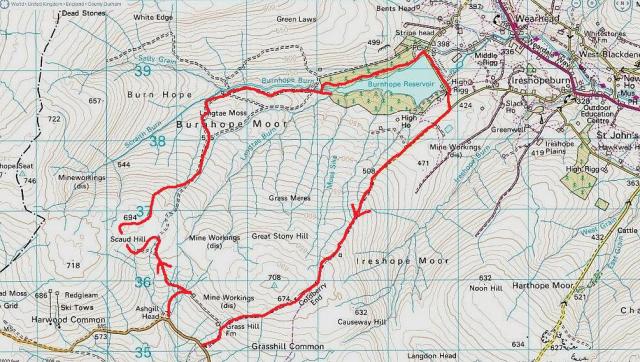 From the top of Scaud Hill I plod leisurely through banks of heather and across slippery peat sikes to the shores of Burnhope reservoir, above Weardale. My life of leisure begins next week, by the way, when machines run by unknown people in Wales ??? on far less money than me ??? snatch my job and hand me a P45 in recognition of 18 years??? service. I shall have leisure coming out of my ears. More than I can shake a stick at, I suppose.

Burnhope reservoir is a fascinating place. Visitors can expect to see a wealth of birdlife including chaffinch, robin, coal tit, great tit, goldcrest, redpoll, heron, teal and black-headed gulls, as well as the ubiquitous grouse. Roe deer frequent the vicinity, as well as common lizards; and red admiral, common blue and large white butterflies flit through the grasses. The Sitka spruce plantations are gradually being cleared and replaced by native trees such as rowan and birch. It would be nice to say Mr Ramsey was responsible for my extensive knowledge of wildlife ??? but he wasn’t. I’ve just read an information board near the Burnhope reservoir public toilets. 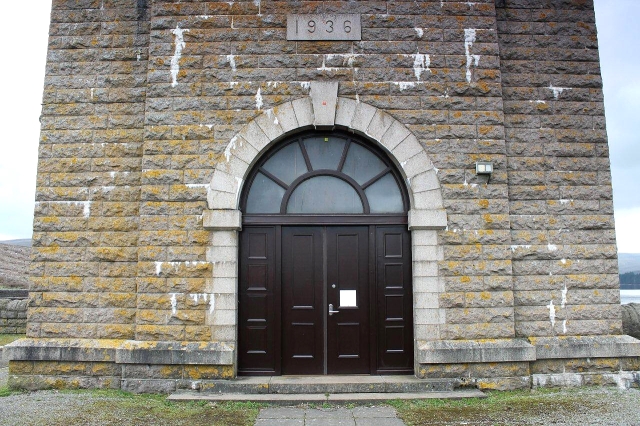 Poor old Mr Ramsey. His take on life, his attitude and his optimism were forged by two world wars ??? when we all stuck together for the common good and strove towards a common goal. His logic was based on the achievements of a nation that pulled itself from the wreckage of the blitz to found a national health service, create public labour organisations to rebuild our factories and towns, take major industries into common ownership, reform the education system to benefit the many not the few, and create a welfare system to ensure the unfortunate would no longer starve as they had during the 1930s.

His vision of wall-to-wall leisure, where machines created wealth and everyone benefited, was born out of the na??ve assumption that the ethos of public, government and municipal service would continue to embrace and uplift the masses. But the juggernaut has been hijacked by privateers and the atmosphere irreversibly poisoned. 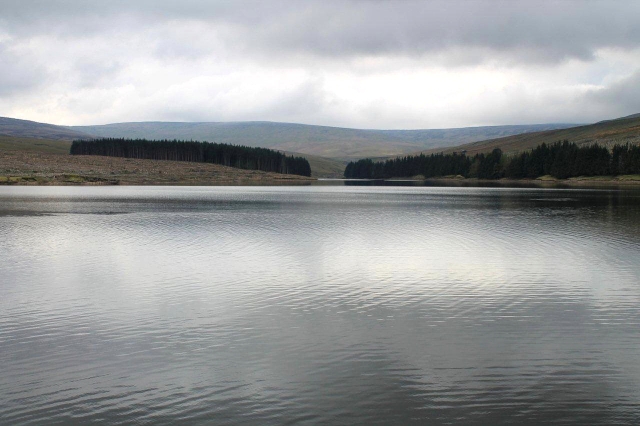 Incidentally, Burnhope reservoir is quite an impressive structure. My walk takes me across the dam, which was built during the 1930s by municipal water boards and public water companies. It is now owned by the private sector Northumbrian Water Group, the chairman of which is Sir Derek Wanless, a past chief executive officer of NatWest Bank and a non-executive director of Northern Rock Bank until is sank into the effluent in 2007 and had to be bailed out with public cash and nationalised to keep it afloat. Apparently, Sir Derek was chairman of Northern Rock’s “audit and risk committee”. So that was a job well done, eh Derek? None of this is relevant, by the way, it just makes me feel better when I bash it into the keyboard.

Above the southern bank of the reservoir is a potholed road that heads south-west up Coldberry End and back over the fell into Teesdale. It’s a very pleasant road to follow in late afternoon sunshine. Up here the moorland birds are piping. But because there are no information boards I can’t tell you what they are. I should dig out my old Observer Book of Birds and do some research. 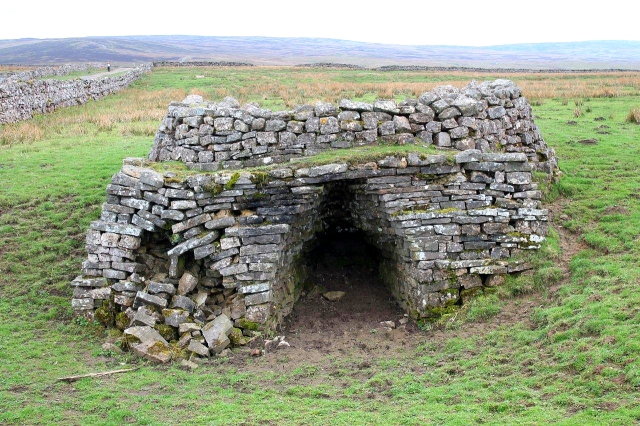 This is a pleasant retreat for the grouse-shooters. Do you know what the only difference between a grouse-shooters’ hut and a mountain bothy is? The answer’s in the next picture 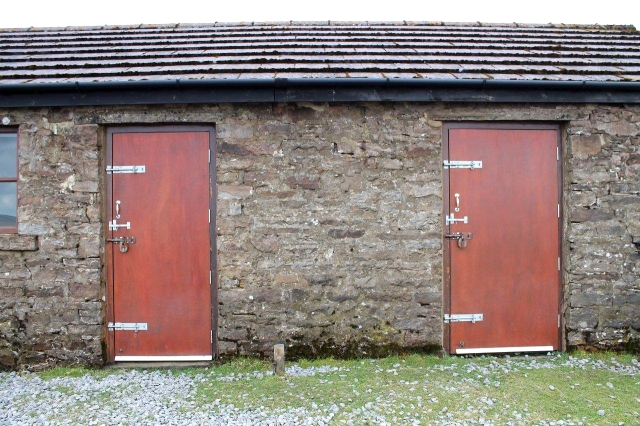 So Mr Ramsey got it wrong. He hadn???t foreseen his commonwealth being carved up by politicians and sold to their wealthy friends at bargain prices. His machines arrived, but they are all owned by rich people who award themselves big bonuses while food banks flourish and malnourishment rises.

I???ve worked as a sub-editor at The Northern Echo since 1995. The paper is owned by a company called Newsquest, which is turning over sizable profits. Our pay has been frozen for the past six years, with the exception of 2011 when we went on strike and won a two per cent rise. That same year the chief executive officer, Paul Davidson, awarded himself a 21.5 per cent increase, taking his top line to ??609,000. The jobs of my colleagues in Darlington, and colleagues on sister papers in York and Bradford, are being axed and their work centralised in Newport, Wales. The top salary in Newport is ??5,000 a year less than I???m on in Darlington. That???s how British industry works in 2014. It feeds off its staff to fill the pockets of its executives.

But what do I care? Tonight I shall raise a glass to Mr Ramsey and all teachers like him. Bring on the leisure, that’s what I say. My new adventure is about to begin.

39 Responses to Scaud Hill and Beyond ??? At My Leisure