Counting the Stones on the Brough-Bowes Turnpike

BELDOO Moss is not the most spectacular hill in the north Pennines. Few people have heard of it; even fewer have tramped across it. But it does harbour one or two surprising features that make it worth a visit.

I???ve driven over Stainmore between Cumbria and County Durham hundreds of times and got my boots claggy with its peat on several occasions. But I???ve never climbed the high ground ??? Beldoo Moss ??? to the north of the summit, which rises in gritstone terraces to a plateau of bog and heather. And up there in that bog and heather, according to my dog-eared map, is a Roman road leading to a Roman fort.

This is a bit like Channel 4???s Time Team. I???m on a tight schedule today. I???ve only got a couple of hours before I???m off to work. Will I find what I???m looking for? Will I unearth any fresh mysteries? Join me again after the break . . . 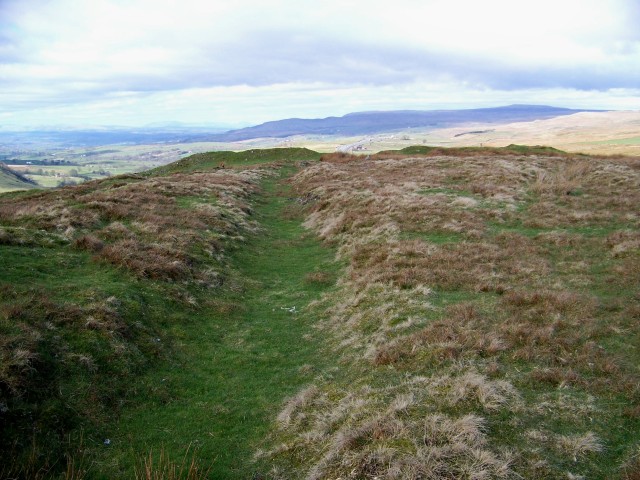 A track leads to the tumbled walls of Maiden Castle, the Roman fort overlooking the western slopes of Stainmore

. . . I???ve left the car near the A66, rattled through a very conveniently-placed underpass beneath the dual carriageway, and I???m standing on the crest of an escarpment looking down on the Cumbrian landscape and the distant Lake District.

I???ve found the Roman road ??? but there???s something odd about it. It???s much wider than I expected (Roman roads were 8ft wide on straight bits and 16ft on curves) and it???s marked with triangular standing stones every few hundred yards. In places the distance between the stones is only a few feet ??? and they stand up like markers, almost as if they were the bygone equivalent of the metal snow poles on the dual carriageway a couple of hundred feet down the fell. 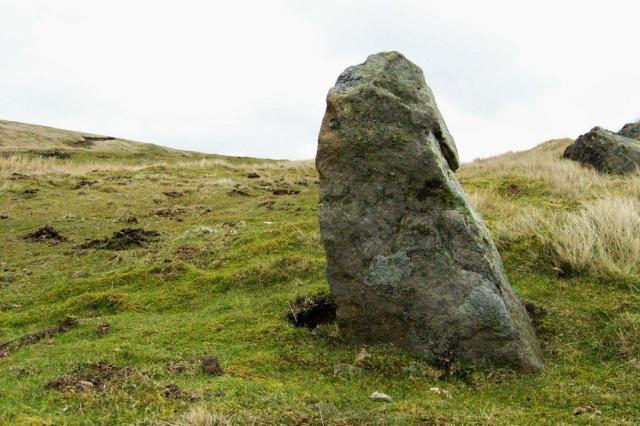 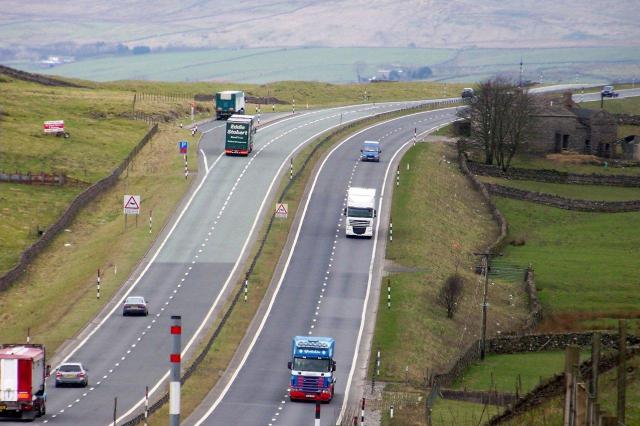 I???ve also found two rounded stones that look remarkably like milestones ??? and a couple of stone culverts running under the road. And I???ll tell you what else I???ve stumbled across ??? an inscription carved on a rock, just below the Roman fort.

We???ll forget about the fort. It guarded the Roman road over Stainmore but it???s nothing more than a few humps and a collection of rabbit holes. Roman forts are ten a penny in the Pennines. What is far more intriguing is the old road ??? because an excited voice in my head tells me that this stretch of straight grassy track, with its stone markers, milestones and culverts, is a section of the Brough-Bowes Turnpike that became obsolete when the first tarmac road was built over Stainmore. Alternatively, it could be an even older road that was abandoned when the turnpike was built. I???m not going to argue the toss either way. I???m just glad I???m up here and the sun is shining. 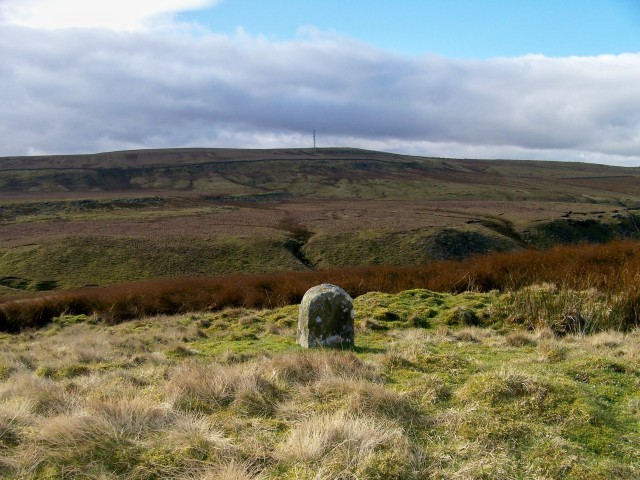 This looks like a milestone, but it???s situated a few yards below the road, possibly on a slip-road, of which there are several 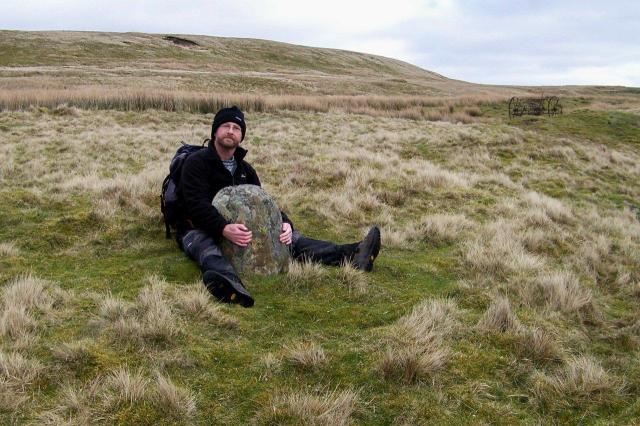 What else could it be ??? a security bollard?

This milestone is positioned at the side of the road. The stones immediately behind it form the road’s foundation

The grassy road runs from just east of Palliard, on the Cumbrian side of the Pennines, over Stainmore summit above the modern A66, to rejoin the dual carriageway at a lay-by just short of the County Durham boundary. It???s length is about one-and-a-half miles but there are a couple of offshoots marked by triangular stones or rounded milestones. I count 25 marker stones along the entire length, positioned on either verge; two rounded milestones (no inscription, though a local historian colleague of mine says that originally they would have been painted had they been turnpike milestones), at least one stone culvert, a rock bearing an indecipherable inscription, and three stones placed in a line ??? which might have had some connection with the Roman fort rather than the road. 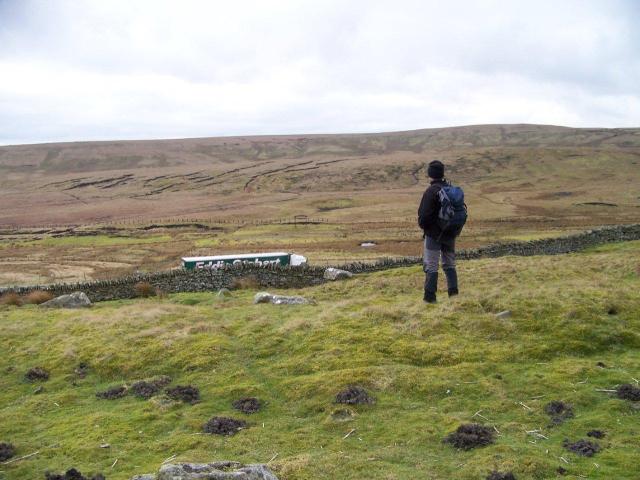 The road leaves the A66 at this point, just east of Stainmore Summit . . .

The boggy pass in the Pennines at Stainmore has been used by man since at least Bronze Age times. The cup and ring carvings on Barningham Moor ??? referred to extensively in other posts on this site ??? are situated on the eastern side. The Romans engineered the first proper road, presumably, which they guarded with a series of forts, and this was used by travellers, traders, armies and rebellious forces right up to the late mediaeval period. Drovers herding stock to Carlisle and Scotland from Yorkshire referred to the Stainmore route as the Winter Road ??? the Summer Road being the more direct route up Teesdale and over the tops to Alston. 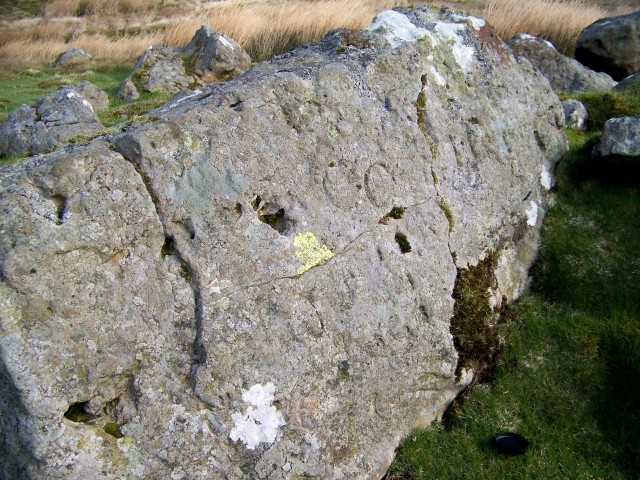 This rock is situated immediately below the Roman fort at the side of the road. There???s a carved inscription but I can???t make out what it says. There???s either CC or GC on the top line followed by something and then possibly an R, then below and to the left there???s a J and something else

Then in the 17th and 18th centuries came the turnpikes. Turnpike trusts were set up to maintain, improve or build sections of highway to generate trade and boost the economy ??? and they were given the power to raise capital and charge road-users at tollgates or tollbars. The Great North Road was turnpiked as far north as Newcastle by 1747. Heading west from the Great North Road, from the junction at Scotch Corner towards the Pennines, the section to Greta Bridge and Bowes (now the A66) was turnpiked in 1744, while the Brough-Bowes Trust was inaugurated in 1742 for the 16 miles over Stainmore to Brough in what was then Westmorland. This high section had one tollgate.

Incidentally, the last time I mentioned Scotch Corner it prompted one or two comments. It???s a place that has always intrigued me because everyone has heard of Scotch Corner but there is nothing there except a hotel and a road junction. I have since discovered the origins of the name. Travellers heading north to Scotland diverged at this point. If Jock was going to Glasgow and the west, and Tam to Edinburgh and the east, this is where they parted. Mind, they probably had a pint and a fight first. Not that I???m generalising.

The old road is swallowed by the dual carriageway near the County Durham border. The farmer in the 4×4 drove up the track to see what I was doing. We had a chat about Roman roads and rabbits

A gate across the road. The gateposts are cast iron ??? much posher than your bog-standard stone stoops. Wonder where they came from . . .

Looking down on the new dual carriageway from the old road, with the trackbed of the Stainmore Railway in the background

So I???m standing on this grassy track with its stone markers and milestones, wondering just what lies beneath my feet. According to one historical source, the turnpike followed the course of the Roman road ??? so that would explain it ??? I???m on a section of the Brough-Bowes Turnpike that was abandoned when navvies constructed the first motor-road over Stainmore, most of which was, in turn, buried beneath the new dual carriageway in the 1980s. But I can???t be certain. If anyone has any thoughts on this, please let me know.

And another thing, I???ve been singing that Simon and Garfunkel song America all morning and I can???t get it out of my head. That damned line that goes ???Counting the cars on the New Jersey Turnpike??? set me off. Great song though.

26 Responses to Counting the Stones on the Brough-Bowes Turnpike