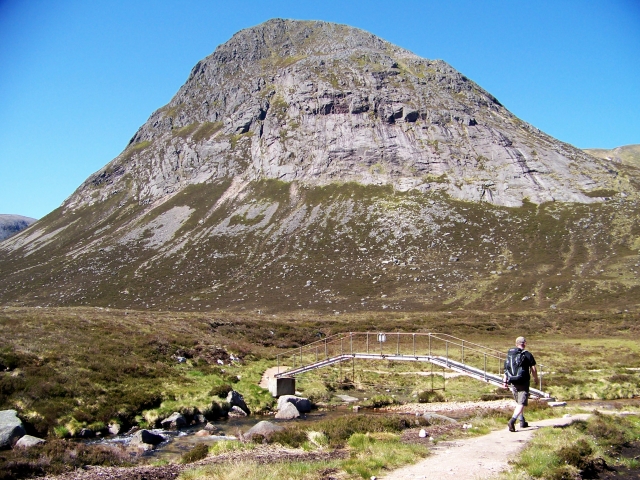 I???M treading carefully for fear of lowering the tone of this website. My last article concerned toilets and that???s as low as I intend to sink. But this post commences on a mountain called the Devil???s Point, and I???ve a feeling I???m about to descend to saucy seaside postcard levels . . .

The Devil???s Point is known in Gaelic as Bod an Deamhain, which translates roughly ??? very roughly ??? as ???point of the demon???. Only the Gaelic is more specific. It???s not a ???point??? as such ??? it concerns a bit of the Devil???s anatomy that could, I suppose, be loosely described, and with a degree of imagination, as a point. The Scottish Mountaineering Club???s Hillwalkers??? Guide, The Munros, Volume I, is more explicit:

Queen Victoria gets the blame for the censored version that appears on Ordnance Survey maps and has fallen into common usage. And whether she???s guilty or not, she deserves the blame anyway for immersing Britain in a duplicitous morality where women were encouraged to wear false, protruding bottoms while table legs were covered to prevent sexually-repressed men ogling them. What sort of message did that send out? You can fantasise about the vicar???s wife???s derri??re but for heaven???s sake don???t fiddle with her furniture. 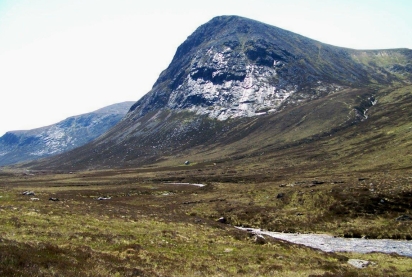 Queen Victoria was taking the airs in Glen Dee with her favourite gillie and secret lover, John Brown, when she asked him to translate the name of the fine mountain rising spectacularly above the river. Slightly abashed, Brown coughed politely and produced the euphemism we have come to know and probably love. Apparently, this was immediately prior to their romance abruptly ending. Later that day, on discovering her legs weren???t made of wood and there were no castors on her feet, Brown gave her the heave-ho and went drinking with his mates. Just kidding.

So here I am, a small and pretty insignificant dot of humanity among the toes of the Devil???s Point. I???ve left the bike at Derry Lodge, tramped over a heathery ridge beneath the southern slopes of Carn ?? Mhaim, and crossed the ice-carved trough of the Lairig Ghru to Corrour bothy. The Devil???s Point rises above my head in great shiny slabs of dark rock. It???s a fine mountain, sure enough. It certainly doesn???t look like an appendage, so I don???t know where those Gaelic chaps were coming from.

There then follow several hours of desperately hard and sweaty work in blazing sunshine and scouring wind during which I climb to the very point of the Devil???s Point (1,004m or 3,294ft), traverse the summit of Stob Coire an t-Saighdeir to Scotland???s fourth-highest mountain, Cairn Toul (1,291m or 4,235ft), and continue to the fifth-highest mountain, Sgor an Lochain Uaine (1,258m or 4,127ft), which also rejoices in the poetic title of the Angel???s Peak. 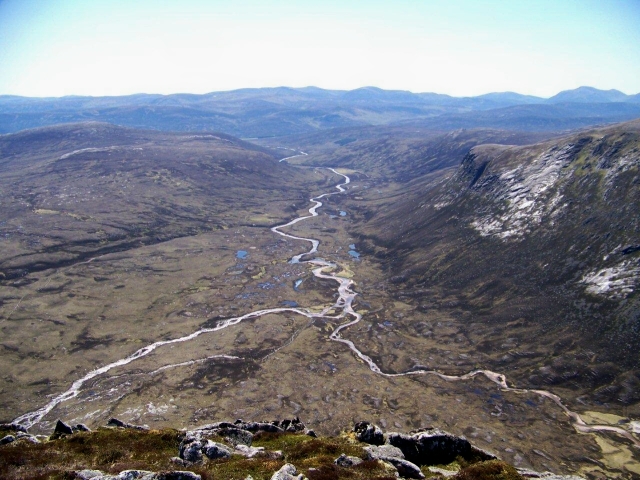 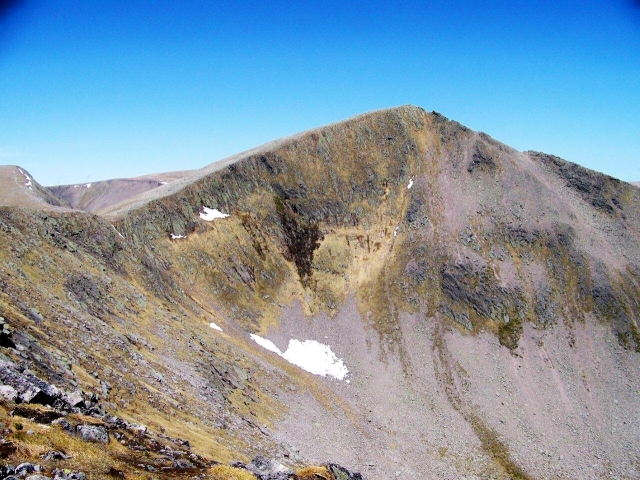 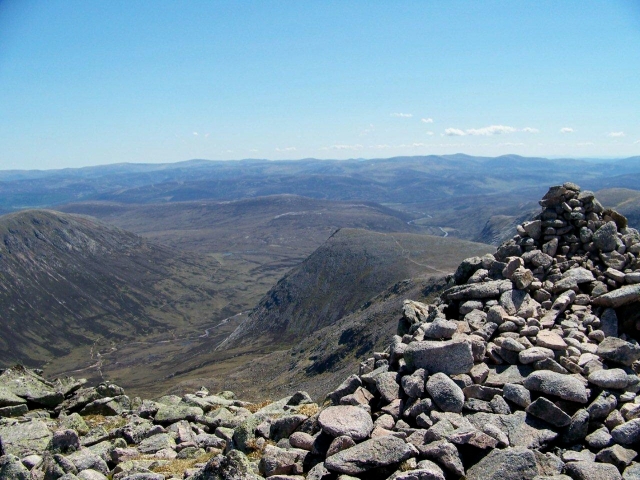 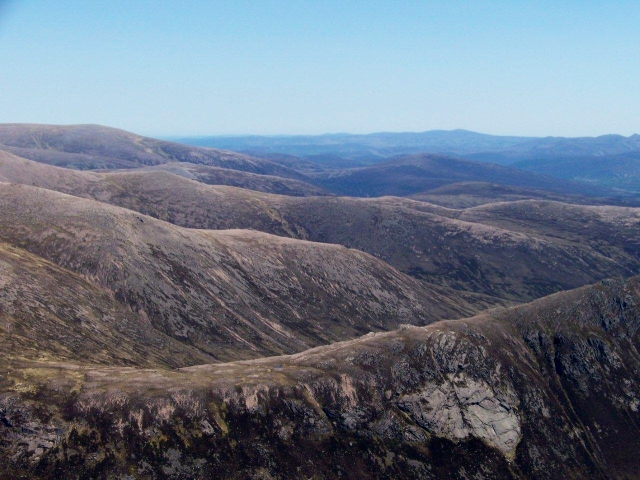 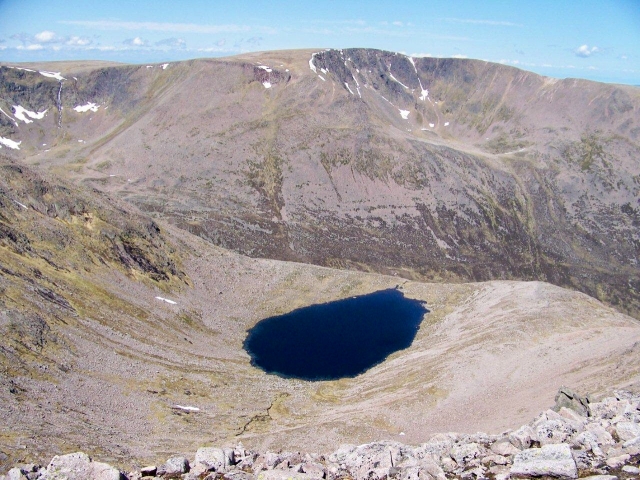 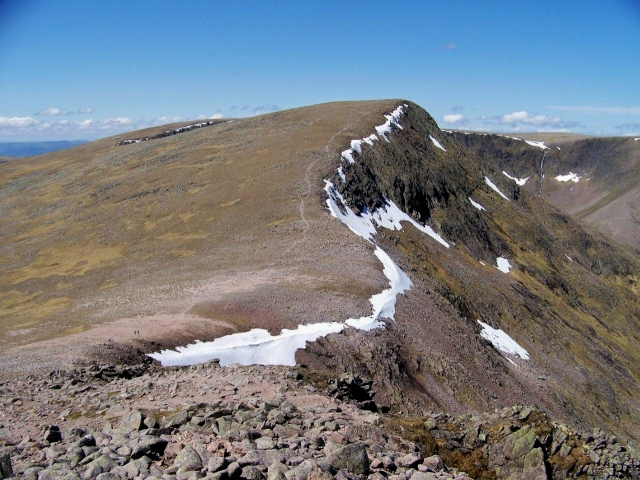 And the views are spectacular. To gaze out across open vistas from the Devil???s Point and behold the confluence of the Dee and Geusachan Burn far below is to view the landscape from the wings of an eagle. And from Cairn Toul, looking east ??? ridge after ridge of spiny mountains rippling to the horizon. And north ??? the magnificent crest of Braeriach, Scotland???s third-highest mountain, dominating the skyline. This is what it???s all about, this mountain climbing thing. This is one of the reasons we do it. Great rocky hills that are usually hidden in mist or skulking in clouds, momentarily caught in sunshine beneath a cloudless sky and waiting for us to tramp over them.

I complete this truly awe-inspiring traverse in the company of two blokes who have, like myself, been attracted to these fine mountains like sad lonely moths. One of them continues on his way from the Angel???s Peak to Monadh M??r, Beinn Bhrotain and a long, weary slog down Glen Dee. I return with the other ??? a chap called Ray ??? to Derry Lodge and the bike.

It???s been a long, hard day. But the mountain views have been spectacular and uplifting, the wind fierce and dry, the ridges a pleasure to traverse, the company engaging.

Now all that remains is a short drive to Braemar and a visit to the Hungry Highlander chippie, where the haddock are so big that both ends flop over the edge of the plate, the chips are crisp and golden and the tea unexpectedly refreshing.

The table legs are a bit on the plain side, mind. So it???s just as well I???m a man of simple tastes and pleasures. 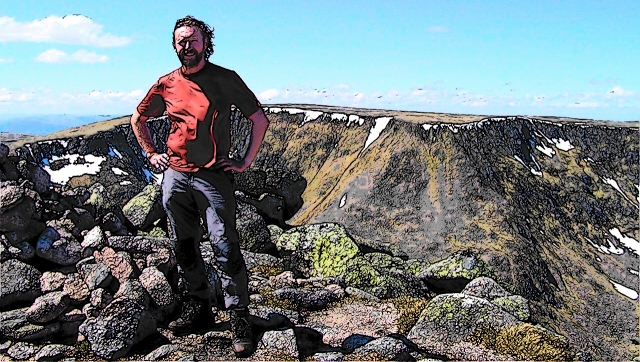 MORE pictures below in the high-resolution gallery. Just click on an image: 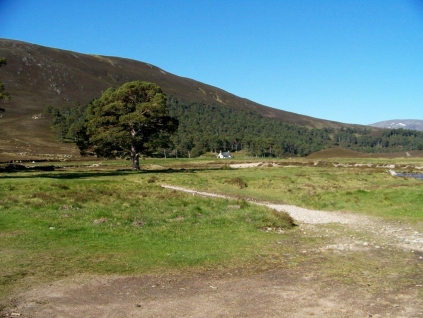 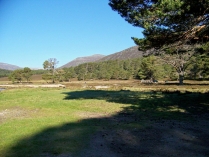 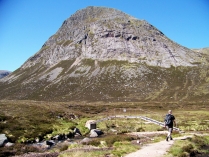 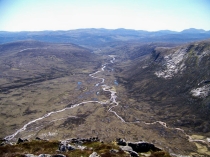 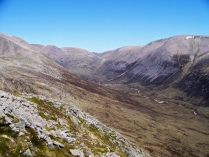 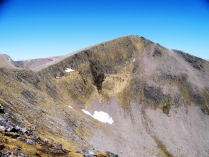 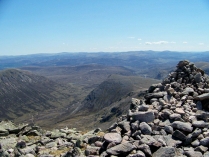 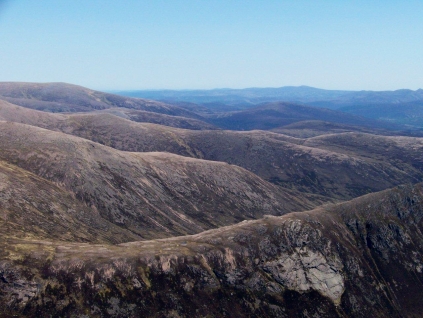 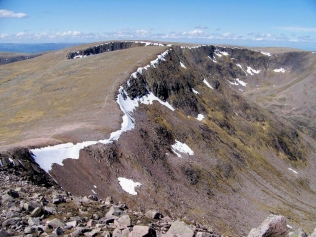 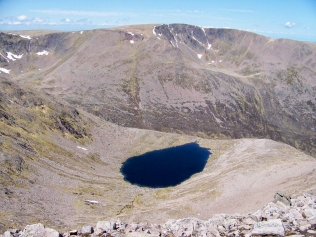 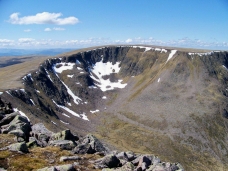