THE joy of paths. There are indistinct paths that fade and confound; paths choked with nettles and brambles; malevolent paths that lead through mud and bogland; and paths that twist in the wrong direction. And there are paths that lift the heart and breathe life into boots ??? and when you spy one from afar you know you???ve got to walk it . . .

I spied such a path the other day on my return along Arroya del Huenes from the peaks of Pico del Tosoro and Cerro del Mirador. It cuts across the flank of a group of mountains in the Baja Monta??a, in the Sierra Nevada, just south of Granada. 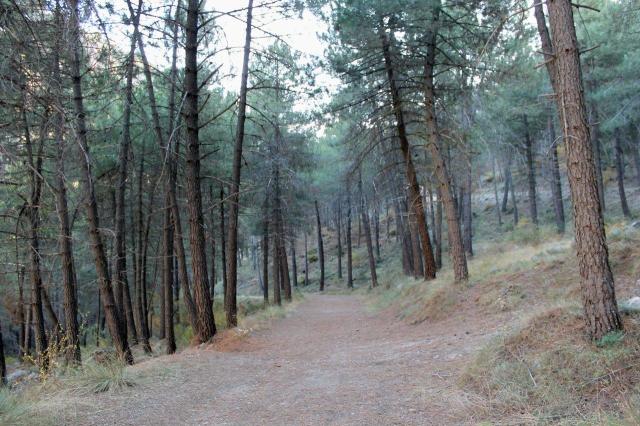 None of this was on my agenda for today. The original plan was to scale Cerro de los Machos (3,329m or 10,921ft) in the high sierra, via the Veredon ledge. But the forecast is for rain, low clouds, and snow on high ground. And because it???s November, and there has been no snow in Andalucia so far this autumn, I do not intend to be caught out in a high-altitude blizzard that dumps a month???s worth of snow in one lump. Three chaps from Teesside perished in a sudden blizzard on neighbouring Mulhacen a few years back. Tragedies of that order keep you on your toes.

My route begins in the parking area at Collado Sevilla, above the town of La Zubia. I tramp a kilometre along the valley of Arroya de Huenes to where a track cuts down from the road to a footbridge over a river, and the start of my mountain path.

Ah . . . Now this is a real gem. Whether the path was built as a mule track or for another purpose, I know not. But it sweeps across the flanks of Cerro del Tamboril in gentle gradients, with wooded crags above and steep slopes below.

In the deep ravine of Barranco del Lobo the path rises beneath shady pines before resuming its gentle course to a ruined refugio at the Fuente Fria (cold fountain). From the refugio, I follow a pleasant woodland path around Cerro Huenes to a col where foresters are busy with chainsaws, and climb a short steep path through a flock of goats to the mountain???s summit. 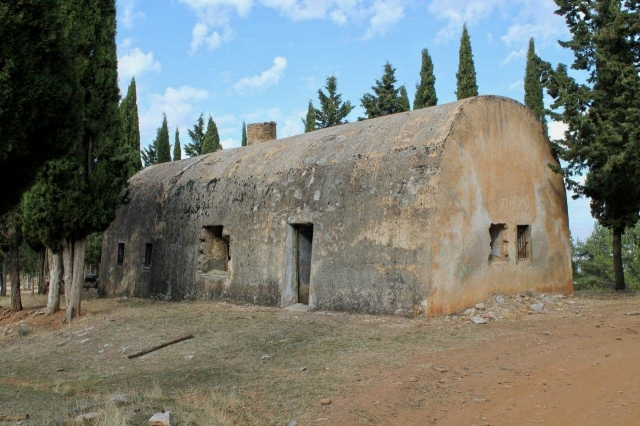 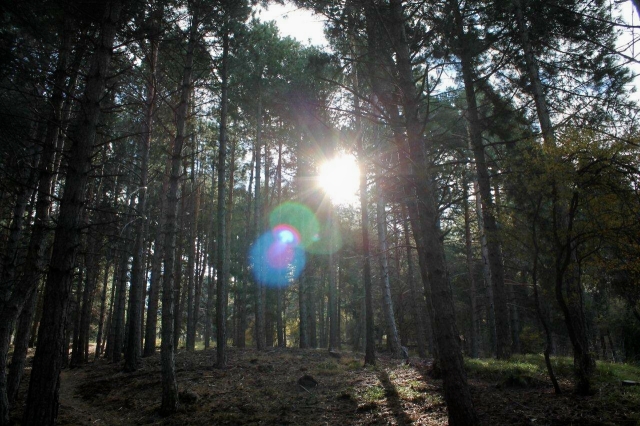 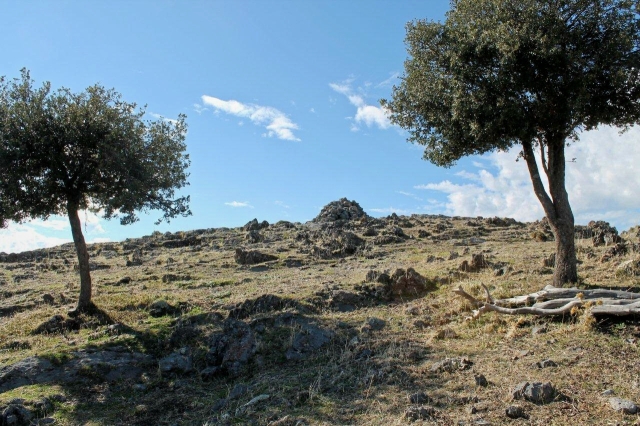 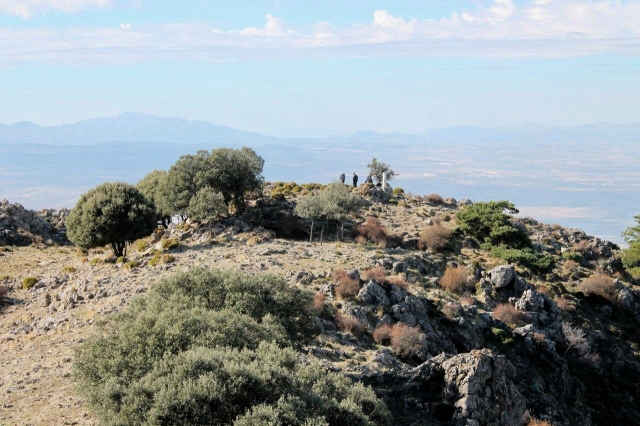 Thousands of feet below, the city of Granada is an indistinct sprawl of drab colours beneath a smudge of haze ??? but up here the air is clear and blue. Clouds are massing on the high sierra to the east and suddenly there is an autumn chill in the air. It???s a strange country this ??? warm sun and clear sky; ice stealing on the wind; winter gathering on the peaks. Three seasons merging in the space of a morning???s stroll.

From the summit cairn of Cerro Huenes I have a choice of routes ??? none of which is apparent because of the pine and scrub cloaking the plateau. The remaining four peaks of the group are quite distinct ??? as is the rocky pyramid of my old friend Trevenque rising behind ??? so I sit with my map, a stick of bread and lump of chorizo, and decide to strike out for the scrubby whaleback of Minas, continue to the top of Gordo???s shaly cone, follow a ridge to the rocky summit of Pico Carne ??? and leave Cerro del Tamboril for another occasion. 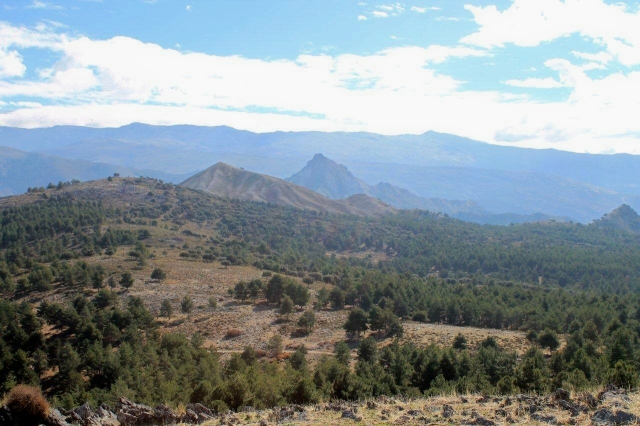 From left, the scrubby summit of Minas, with the shaly cone of Gordo behind, Trevenque behind Gordo, and the high sierra in the background with the hump of Caballo’s summit to the right

Crossing the plateau I chance upon a mountain dog ??? a friendly fellow with a bell around his neck. I???ve encountered several of these dogs on my travels in the Sierra Nevada, where their job it to guard flocks of sheep and goats, and some can be rather short-tempered.

I blame a lack of social contact and the absence of opportunities to empathise with fellow mountain dogs. But this one is an affable chap, which is a relief because he???s so big his head is level with my waist. Wouldn???t want to fall out unnecessarily.

Close encounter. The dog shoves its snout into a very sensitive area, no doubt to determine whether I’m a friend or foe. Good job I’m a friend 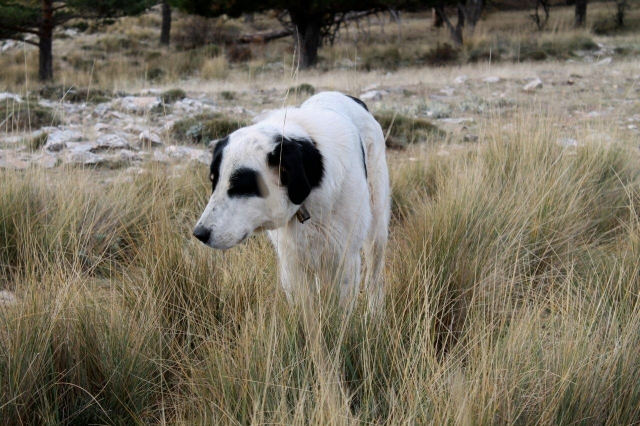 The dog pads along behind me for quite a while, but on the high slopes of Minas he sits in the scrub and watches as I disappear over the skyline. I wonder where he???ll head for now? Back to his goats, probably, with his bell jingling. A sniff around unfamiliar boots is probably the highlight of his day. 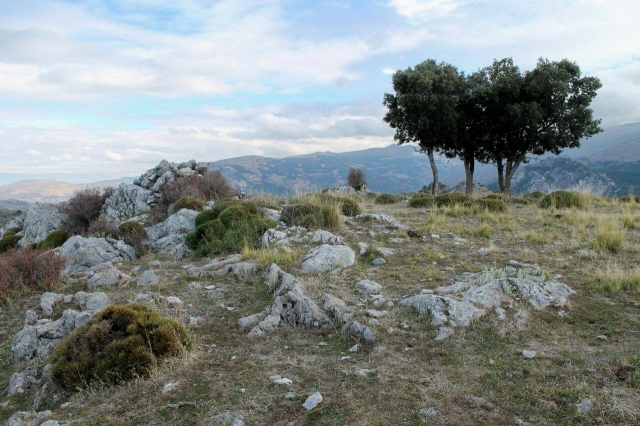 On Cerro Gordo, which Andy Walmsley describes in his Walking in the Sierra Nevada (Cicerone) as ???resembling a pile of small stones deposited by some immense dump truck???, the first spots of rain spatter in the dust. The cloud base sinks lower down the high sierra. Up there on Veleta, Los Machos and Mulhacen, I learn later, the first snow of autumn is falling. 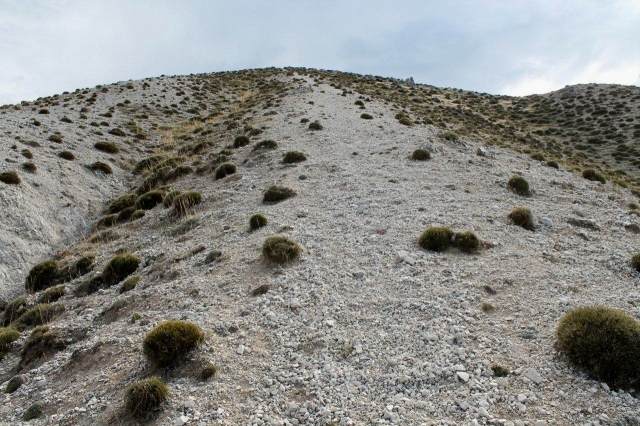 It’s a slog, but someone’s got to do it

My final summit, Pico de la Carne, is a short and dusty scramble up steep ground to a rocky perch overlooking the wooded valley of Arroya de Huenes. Trevenque sits directly opposite, its pale faces framed against the dark mountains and grey cloud behind. 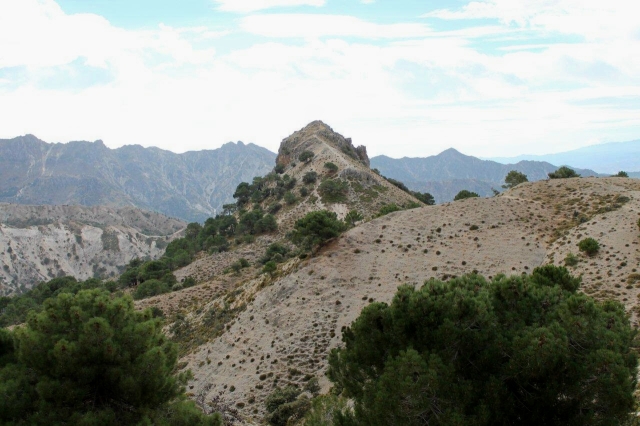 The view from the summit of Pico de la Carne, with the blue peaks of the Sierra Tejeda y Almijara in the far distance

I pick my way down to a col between Pico de la Carne and Cerro del Tamboril and strike a path that zigzags down to the valley road at Puento de los Siete Ojos (bridge of the seven eyes) and return to my starting point. Rain is falling steadily and the wind is cold. Winter is on its way. I shall light a fire of eucalyptus wood in the casita tonight.

Trevenque, with the first snow clouds of autumn gathering behind 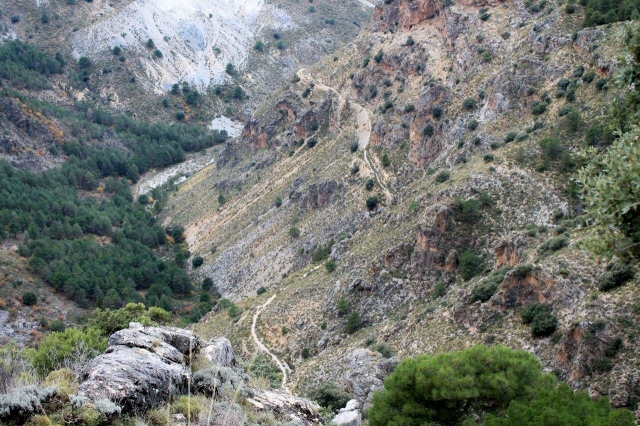 Good paths are worth walking. The final destination is not always important. Good paths, dust on your boots, sweat on your shirt, blue hills on the horizon. And a crackling wood fire and bottle of wine as the shadows lengthen. That???ll suit me.