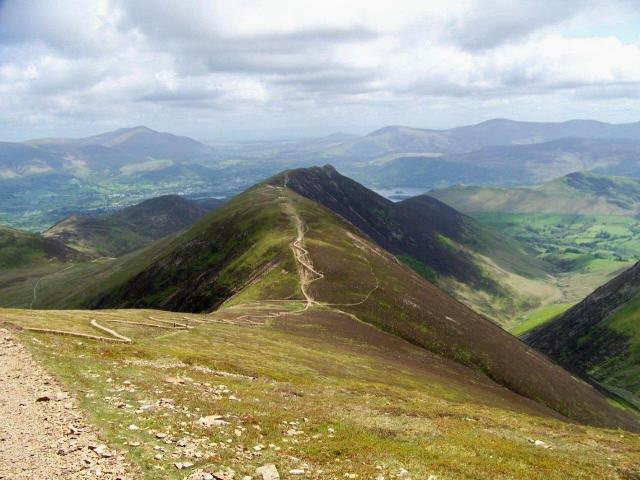 NEAR the summit of Causey Pike, where the heathery track gives way to steep rock, an elderly man sits on a boulder. He???s wearing a wide-brimmed hat and his white hair wisps about his ears. I get the impression he???s waiting for someone. He gives me a nod and a smile as I arrive at the foot of the outcrop . . .

The man tells me it???s many years since he???s been up here and he???s uncertain of the way forward. Does he skirt around the crag on a faint sheep trod and climb the summit from behind, or does he go straight up the well-worn rock? I suggest he scales the rock ??? but I have niggling doubts because I, too, haven???t been up here for a long time. I start to climb, and the elderly man follows.

This guy???s in his late seventies or possibly early eighties. This morning he ascended some craggy bits of fell at Rowling End, above Stoneycroft, and his wiry body is now bending in the wind on Causey Pike???s barren summit (637m or 2,090ft) ??? that???s a climb of 497m (1,630ft) up some very steep ground.

Beyond the summit, in a hollow sheltered from the wind, he tells me he is a little lacking in confidence and was glad I arrived to offer my support. We chat for a while about famous walks that are noted for being exposed in places, such as Sharp Edge on Blencathra and Striding Edge on Helvellyn.

Then we discuss Broad Stand on Scafell and neighbouring Lords Rake. And he tells me about a ledge that runs across Scafell crags from Lords Rake called the West Wall Traverse, which leads into the dark cleft of Deep Gill. This is a route I have never heard of. He tells me he???s done it several times. But I smile at the mention of Deep Gill because I once, rather foolishly, descended it in snow, much to the consternation of a group of climbers who waited patiently at the bottom while I picked my way down (see footnote).

The elderly man is heading for Sail, but I???m going further west to Crag Hill and Grasmoor, so I leave him to finish his cheese sandwiches and steam off along the ridge of Scar Crags.

Elderly men. Where would we be without them? We???re all going to end up as elderly men at some juncture, except those of us who biology has decreed are destined to become elderly women. So it crosses my mind that it might be an idea to spend more time among them to pick up some tips. Like serving an apprenticeship.

I glance back with a feeling of regret and see this wiry black dot on the skyline as the man follows the path along Scar Crags. Then an unseen hand ushers me in a westerly direction towards higher fells and solitude. 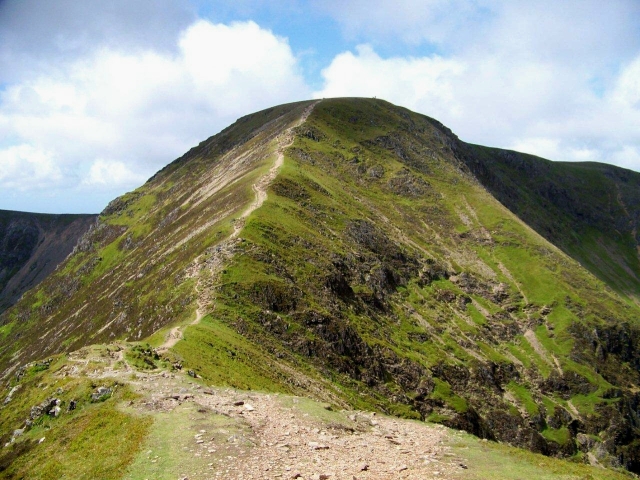 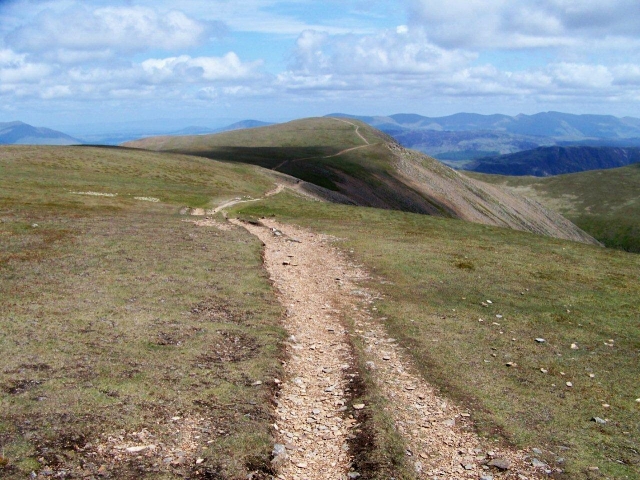 The sky is more sunny than cloudy, but the wind is cold, strong and gusty. I???m in good spirits and charge up the strange zigzag path to the summit of Sail and continue over its crown to the top of Crag Hill, where I take some bait in a tiny dry-stone shelter overlooking Coledale.

A pleasant walk in brilliant sunshine though buffeting wind delivers me to the summit shelter on Grasmoor. Then I backtrack to the col between Grasmoor and Crag Hill, drop down to Coledale Hause, cut beneath Force Crag to High Moss and Outerside, and follow Stonycroft Beck down its pleasant valley on the old Cobalt Mine track.

On the long trudge down the track I chance upon the elderly man, who’s supping coffee from a tartan flask. We again pass the time of day and discuss our various adventures. Then I bid him farewell, wander back to the car, and head home across the Pennines.

I mention the encounter to my wife as we???re having dinner, and that I wished I???d spent more time in the elderly man???s company. She asks me if I???d seen myself in him, myself in perhaps 25 years??? time. Or perhaps . . . had I seen my future self?

I dwell on this while I???m downing a beer. And I decide she???s been writing too many short stories at her creative writing class. Then it dawns on me that if I???m still compiling this blog in 25 years??? time I???ll have to climb Causey Pike again on the same day of the month, just to prove a point one way or the other.

FOOTNOTE:
FLASHBACK to a winter in the late 1970s and an impromptu descent of Deep Gill on Scafell. I???d climbed a corrie to the east of Black Crag and circled round onto the summit of Scafell with the intention of descending Broad Stand onto Mickledore. This proved to be rather beyond my capabilities. So having slithered about on the sheet ice that cloaked the north-east crags like polished glass and decided it wasn???t for me, I picked my way down Deep Gill ??? which I had climbed the previous summer.

The summer scramble, which I think I did with my old schoolmate Peter Frith, was good fun. The winter descent was a great deal more tricky ??? in fact I slid the final twenty or thirty feet and landed among the climbers waiting at the bottom, one of whom (the chap in the red cagoule) was a fellow workmate from the shipyard in Barrow.

Alen McFadzean. Journalist. Recently made redundant from The Northern Echo when my job was transferred to Wales to be done by people on lower wages. Former shipyard electrician. Former quarryman and tunneller. Climb mountains and run long distances to make life harder. Gravitate to the left in politics just to make life harder still.
View all posts by McEff →
This entry was posted in Climbing, Environment, Ghosts, Hiking, Life, Mountains, Walking, Writing and tagged Lake District, outdoors, Pennines, The Lakes. Bookmark the permalink.

32 Responses to Causey Pike ??? A Country For Old Men?