Helvellyn with Ghosts (Part 1: Wythburn Mine)

McFadzean on the spoil heap of No. 1 Level at Wythburn Mine, more than 2,000ft up Helvellyn, with Thirlmere in the background

ON the other side of the wall lie the bones of two children in a grave beneath the snow. It’s too dark to read the inscription on the stone. The sun has not yet risen. But I know it by heart:

The only sound in the freezing dawn is the roar of the stove as water boils for tea. Snow lies cold on Ullscarf and Steel Fell. Ice covers large swathes of Thirlmere. The car park at Wythburn Church is a blanket of white. On the other side of the wall, the graveyard lies silent.

John and Jane died within 13 days of each other in March 1863. They were less than a year old. Their father was a lead miner, blasting tunnels into veins of argentiferous galena high on Helvellyn. When I first discovered the grave, back in 1981, I was struck by its sadness. I used to wonder how people who possessed nothing but themselves and their children could cope with such sorrow. I don’t wonder any more because tragedies like that – some greater, some lesser – happen to many of us.

I’m in a sullen mood as I trudge north along the forest track above the east bank of the lake. I’ve lost a sock. The snow’s deep and I’ve got one warm foot and one that’s ready to freeze. I’ve searched the car and the rucksack. No right sock. Unbeknown to me it’s lying on a kitchen floor on the other side of the Pennines.

Mine Gill, let me tell you, is the most interesting route up Helvellyn. It’s nowhere near as spectacular as Striding Edge or Swirral Edge, and not as leisurely as the routes from Grisedale Tarn, Sticks Pass and Thirslspot – but it has a story to tell. High in the gill lie the remains of a vanished industry – a profitable lead mine that was closed down by Manchester Corporation when the valley was flooded to create the Thirlmere reservoir in the 1880s.

The mine was known by several titles during the course of its 40-year life: Wheal Henry was the first, then Helvellyn Mine, then Wythburn Mine. A lot of money was invested to get it into a state of successful operation. A lot was lost, too.

Shortly before I reach the gap in the forest where Mine Gill Beck plunges down the fellside to the castellated well building on the lake bank, I shoot up into the trees. Hidden from view is a small stone cabin that once served as the mine’s powder house. Legend has it that during the war a German spy hid himself here. Last time I visited, the hut had a door. That’s gone, but there is a pile of firewood inside and a smell of smoke. Judging by the footprints in the snow, someone’s spent some time here.

The mine track zigzags through the trees to emerge on the fellside at the narrowest point of the gill. The remains of an inclined railway can be seen running up the mountain. This was built by the Wythburn Lead Mining Company in the early 1860s under the direction of the mine captain, John Muse. I know John Muse. Staunch Wesleyan. Used to live in Matterdale. He’s in the churchyard as well, under the snow. He’s there with the little twins and a handful of miners. 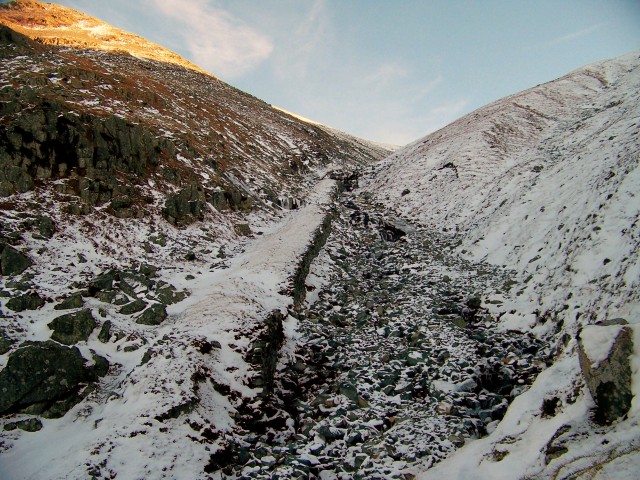 I slog up the incline to the remains of the drumhouse and the spoilheaps of the main tunnel – No. 2 Level. Across the beck stand the ruins of a building that housed an office and a smithy. The blacksmith had the best view in the world, so far as views from smithies go – an uninterrupted vista that encompasses the western Lake District. 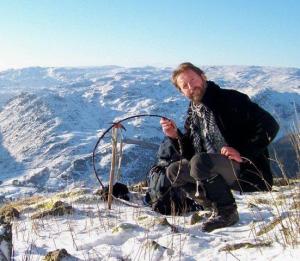 A hundred-and-fifty feet higher up the fell is the No. 1 Level spoilheap. This might sound a bit perverse, but on the day after Boxing Day 1981, me and a group of friends dragged two 40-gallon oil drums from the main road through deep snow to this high point (we’re at an altitude of just over 2,000ft here – two-thirds of the way up Helvellyn). I’ll tell you why in Part 2.

Crampons on, I crunch another 150ft higher to Arnison’s Low Level. All these levels were blown in with explosives when the mine closed. Some were dug open by Cumbria Amenity Trust members in the early 1980s and explored. Most have been lost again under the encroaching scree. But at Arnison’s Low Level I discover a hole in the snow where warm air is venting to surface. I move a few rocks, and I hear the roar of an underground waterfall plummeting 300ft down internal shafts. It’s an extremely haunting sound. And it brings back a flood of memories.

I crunch higher in the frozen snow to Arnison’s Top Level, which at an altitude of 2,300ft is, I reckon, the highest mineral venture in England. And in the brilliant sunshine I pour some tea and raise a cup to the man who drove it, John Arnison.

Arnison was born in Yanwath, a small village to the south of Penrith, and was a lead miner of 29 when he moved into Pinfold How at the foot of the gill with his wife, Isabella, and children Thomas and Sarah. Isabella Arnison was no stranger to remote mining communities. Born in the northern Pennines she grew up among the rural collieries of Haltwhistle before marrying and settling in Matterdale, where the first two chil­dren were born.

The family was brought to Thirlmere – or Leathes Water, as the original lake was known – by John Muse in the 1860s. Pinfold How, like the nearby Cherry Tree Inn, is now under the waves along with The City – the main village of the dale. The tragic twins, John and Jane, were born in Pinfold How. Two more children, Isabella and William, were born sometime later. They survived.

I know this because I published a history of the mine in 1987. These things stay with you. These people had stories to tell. But I suppose most of us have. The lives of these people, though, have become interwoven with my own. They feel like friends.

d feet to the summit of Helvellyn. There are lots of walkers about, the first I have seen all day. One chap is slicing his way through the cornice with two ice axes, having scaled the east face from Red Tarn. We exchange a few words as he waits for his friend.

The summit of Helvellyn

It’s a long trudge over Whiteside and Raise in the snow and ice. I drop down Sticks Pass to just above Legburthwaite then cut south to the forest and the track back to Wythburn.

Darkness has fallen by the time I reach the church. In the intensely cold evening I boil a pan of tea, warm some homemade soup, wrap myself in a tartan travelling rug and sit in the small circle of blue light around the stove. Stars twinkle. Breath hangs in clouds.

On the other side of the wall in the utter silence of the graveyard are people I know. I’ve known them for years. I visit them occasionally – usually in the sunshine; today in the half-light of dawn and the blackness of night. I’m quite happy with that. 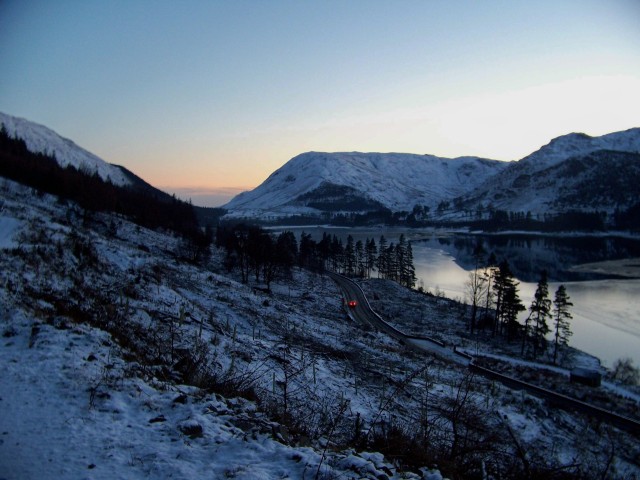 11 Responses to Helvellyn with Ghosts (Part 1: Wythburn Mine)